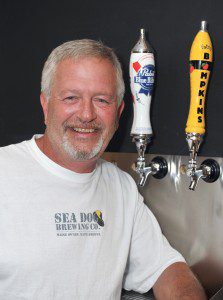 Bill Boisseau, president 7B’s in Westfield, prepares to open the new business located at 1152 Southampton Road. The 7’B’s is located at the former Purple Onion at the corner of Southampton Road and North Road. (Photo by chief photographer Frederick Gore)

WESTFIELD – Bill Boisseau is living his dream, and it’s one he is happy includes his family.
Boisseau, a Westfield native, is the owner of 7B’s, a new bar and grill on the verge of opening in the space formerly known as The Purple Onion. And yes, there are actually seven “B’s” at the bar – Boisseau, his wife Jane, sons Jeffrey, John, Steve, and daughters Sara and Kate.
For Boisseau, the dream is not just about opening a restaurant, but doing it with his family.
“This dream started with my traveling and enjoying so many meals out and looking for the local facilities and collecting menus and saying someday I will open my own place,” said Boisseau. “Now that dream is coming true and I am blessed with having this truly being a family affair.”
Boisseau said Steve has taken on a role in the renovations and Sara, now an RN, was the head waitress at Max’s Tavern and will be training the wait staff. Kate lives in St. Kitts, West Indies, but has been included on many decisions via the wonders of technology. Boisseau’s wife Jane will serve as treasurer and bookkeeper.
Twins Jeffrey and John are both graduates of Johnson and Wales and work in the food industry. Jeffrey is co-owner of the Boston-area chain Sea Dogs and spent time as manager of the ESPN Zone in Las Vegas and The Greatest Bar in Boston.
John lives on Long Island and works for Red Bull. Boisseau said both have been integral in the business, and an inspiration.
“Usually it’s the kids who follow in the dad’s footsteps, but we have the opposite,” Boisseau said.
A career in sales took Boisseau around the world and he became a bit of an expert at dining out.
“I collected menus everywhere I went and when it came time to create our menu, we did look at them for ideas,” he said.
Boisseau said he relied heavily on Jeffey’s restaurant experience when making choices for the mostly pub-style menu. However, just a regular old burger and fries was not what Boisseau had in mind from the start.
“We have good pub food, with a bit of a twist,” said Boisseau, citing the seven varieties of French fries as an example.
From salt and vinegar to garlic to Cajun, a basket of fries at 7B’s is sure to tempt discerning palettes. Another pub favorite, chicken wings, also packs a different punch at 7B’s, and not just because Atomic is one of the seven flavor offerings.
“We will sell our wings by the pound,” he said.
The Double Belly Buster Burger is sure to be a crowd-pleaser – at least for the crowd watching a patron attempt to eat this gastronomic delight that Boisseau said will have a reward for those who finish it in its entirety.
“We will have some kind of contest for that one,” he said.
The menu will also include daily lunch and dinner specials, as well as themed specials and a children’s menu.
“We are family-friendly,” said Boisseau. “At night we will have a bar crowd, but meals will be geared towards couples and families to come and enjoy.”
Being friendly is something Boisseau takes pretty seriously.
“We have spent tireless hours creating an atmosphere that will want you to come back time after time and that it will be the friendliest bar in the area,” said Boisseau.
7B’s will have a full complement of everyone’s favorite beers and will feature 10 taps of the best Brewery’s in the area. Both Bill and Jeffrey said they would absolutely have the “coldest beer in the valley.”
They also have the latest in Touch Tunes, six large screen TVs and games, and expect to have Keno and entertainment.
7B’s has been completely renovated, with nothing left of the Purple Onion but memories from former patrons.
“This is definitely not the Onion,” Boisseau said, gesturing around the brand new bar and dining area.
Light pine walls have brightened up the entire space, which features photographs of Westfield. Brand new restrooms, kitchen and a patio space complete the revamped restaurant.
Boisseau’s son Steve and brother-in-law Jack Quimper have devoted countless hours toward helping to transform the Onion into 7B’s.
The Purple Onion was a Westfield icon, which opened in 1964. When Boisseau purchased the property, it had been vacant for five years.
“The Onion is now a name of the past,” said Boisseau. “It was a gateway to Westfield for all those years and we are sure many people could tell you stories of their experiences in visiting the Purple Onion, which was visited by all walks of life, but it was a landmark that when someone was giving directions it was always either straight through the light past the Onion or take a left at the Purple Onion to downtown Westfield.”
Boisseau hopes folks will now include 7B’s as a landmark.
Curious passersby have probably noticed various signs announcing the opening of 7B’s, which Boisseau said was originally supposed to take place last spring. Due to circumstances beyond Boisseau’s control – mainly the installation of a city water line and a gas line – construction was delayed. Boisseau said if all goes as planned, he expects to open this month.
“We will be planning a grand opening celebration, so people should check the paper,” he said.
The sign above the door to 7B’s states Boisseau’s philosophy for his bar and grill, and it’s a mantra for all seven Boisseau’s as they live out their dream – “Good Food, Good Drink, Good Times.”