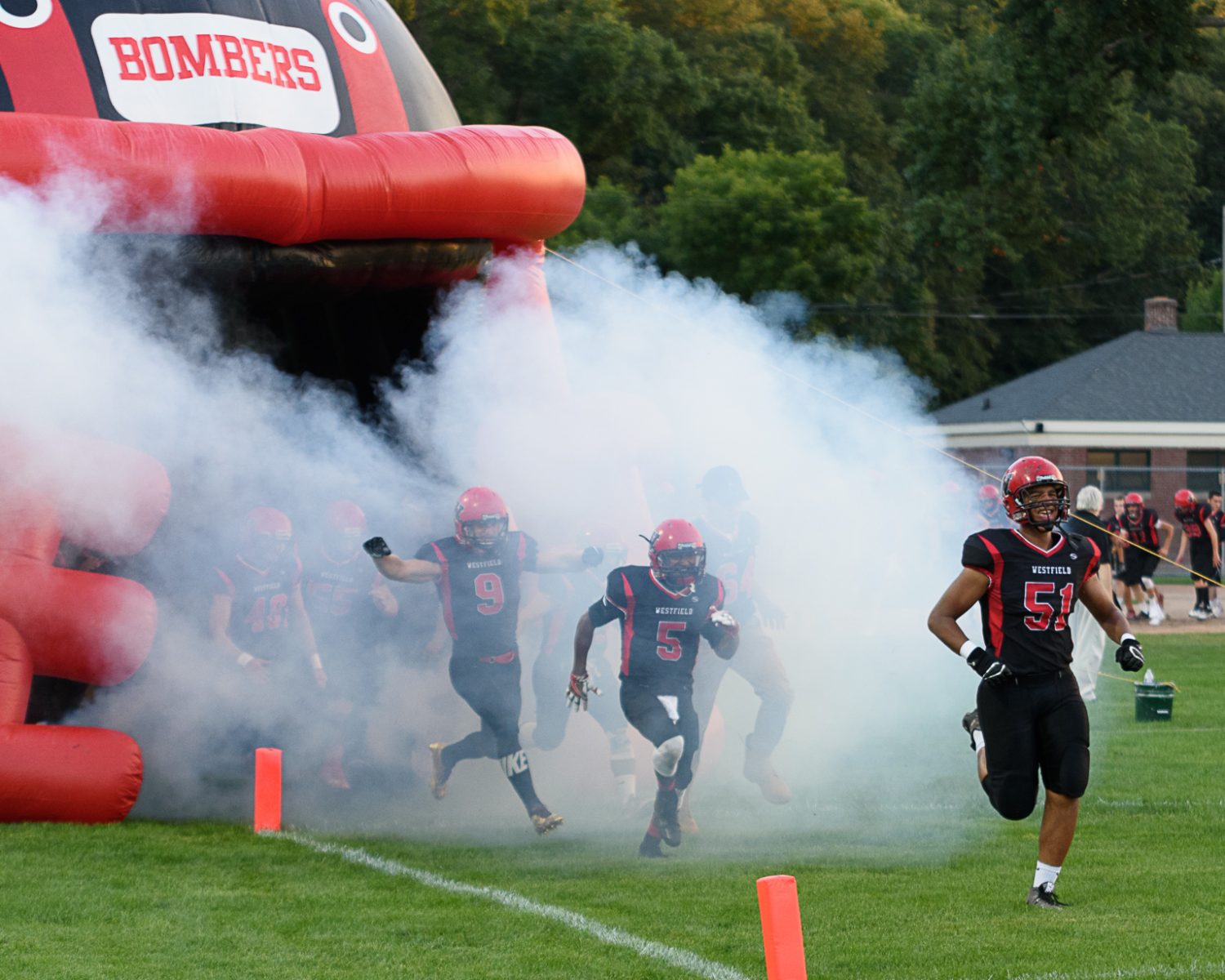 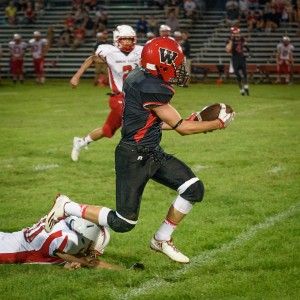 WESTFIELD – It’s been a few years in the making, but the Westfield Bombers are officially back.
Senior quarterback Austin St. Pierre victimized Hoosac Valley for five touchdowns (3 passing, 2 rushing), and the Westfield Bombers football team kicked off the 2016 season by rolling over the Hurricanes 54-22 Friday night at Bullens Field.
St. Pierre had touchdown throws of 82, 25, and 71 yards, airing it out for 238 yards on 9-of-12 attempts passing. He logged rushing scores of 27 and 13 yards and finished with 10 carries for 112 yards.
The season – and the game for that matter – could not have started any better for the Bombers.
Westfield came out fired up on defense, forcing a 3-and-out on the game’s opening series. The Bombers then put together a long, time-consuming drive that set the tone.
Westfield chewed up 74 yards in a 14-play drive that consumed seven minutes, 10 seconds and culminated in a Wilton Royal 7-yard run. Royal took the handoff from St. Pierre and squirted up the middle for the score with 2:27 remaining in the first quarter.
Westfield’s defense rose to the occasion over and over again.
Hoosac Valley put together a small drive, moving the ball on to Westfield’s half of the field. The Bombers kept the Hurricanes from entering the red zone though as St. Pierre intercepted the ball near the 11-yard line to kill the drive.
Westfield struck quickly.
St. Pierre found sophomore wide receiver Bailey Collier streaking down the sideline, hitting Collier in stride on a precision pass that resulted in an 82-yard strike. Collier, who had a step on the defensive back, caught the beautiful high-arcing pass near midfield and raced to the end zone. The touchdown came with 9:04 remaining in the second quarter, and resulted in a 14-0 lead as the Bombers converted their second straight 2-point conversion.
Hoosac Valley responded.
The Hurricanes moved the ball half the length of the field, scoring when junior running back Steve Stojda burst through the defensive line and bounced outside for a 17-yard touchdown scamper to make it 16-6 with 3:51 left in the half. 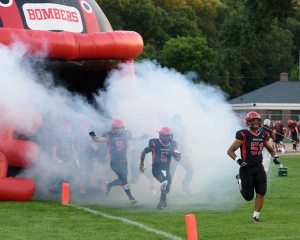 The Westfield Bombers roar out of the tunnel to begin the 2016 high school football season Friday night at Bullens Field. The Bombers rolled over the Hoosac Valley Hurricanes, 54-22. (Photo by Marc St. Onge)

The scores came fast and furious.
One minute, seven seconds later, St. Pierre hit Collier for a 25-yard touchdown catch and run. Stojda returned the ensuing kickoff 79 yards for a touchdown. With 2:16 on the first-half clock, senior wide out Cam Garfield crossed the goal line after finding himself on the receiving end of a 71-yard TD pass from St. Pierre. It was the final score of the half.
Westfield wasted little time scoring in the second half.
St. Pierre engineered a six-play, 60-yard drive that was capped off by senior running back Mark Blahut’s five-yard TD run with 9:54 left on the third quarter clock. The Bombers’ fifth straight successful two-point conversion made it 40-14.
St. Pierre scored again from 27 yards out on a quarterback keeper with 4:08 left in the third quarter. A sixth straight two-pointer gave Westfield a commanding 48-14 lead.
Junior running back Matt Hall rumbled in for a 3-yard touchdown run with 1:37 left in the third quarter. Westfield fired back with a few plays, and a 13-yard TD run from St. Pierre with six ticks left in the third quarter for a 54-22 lead. The Bombers sputtered on a two-point conversion, falling short of the goal line for just the first time in seven tries against Hoosac.
Westfield returns to action Friday at home against Agawam. Kick off at Bullens Field is 7 p.m.

Goodreau nets goal
Renaissance 10, St. Mary 1
Renaissance exploded for seven first-half goals en route to a home victory at Marshall Roy Field in Springfield. Sallie Goodreau (from Erin Olearcek) scored the lone goal for St. Mary.
“The good thing about this loss,” St. Mary coach Andy Lussier said, “is what it will make us focus on going ahead. I believe that this team has all the right pieces to be a winning team. We just have to finish putting them together.”

JV BOYS’ SOCCER
Rams shut out Panthers
Southwick 2, Palmer 0
Evan Clarke scored one goal and assisted on the other in Southwick’s shutout victory. Vincent Diaz had a goal, and Nick Brown and Emilio Colucci each collected an assist.