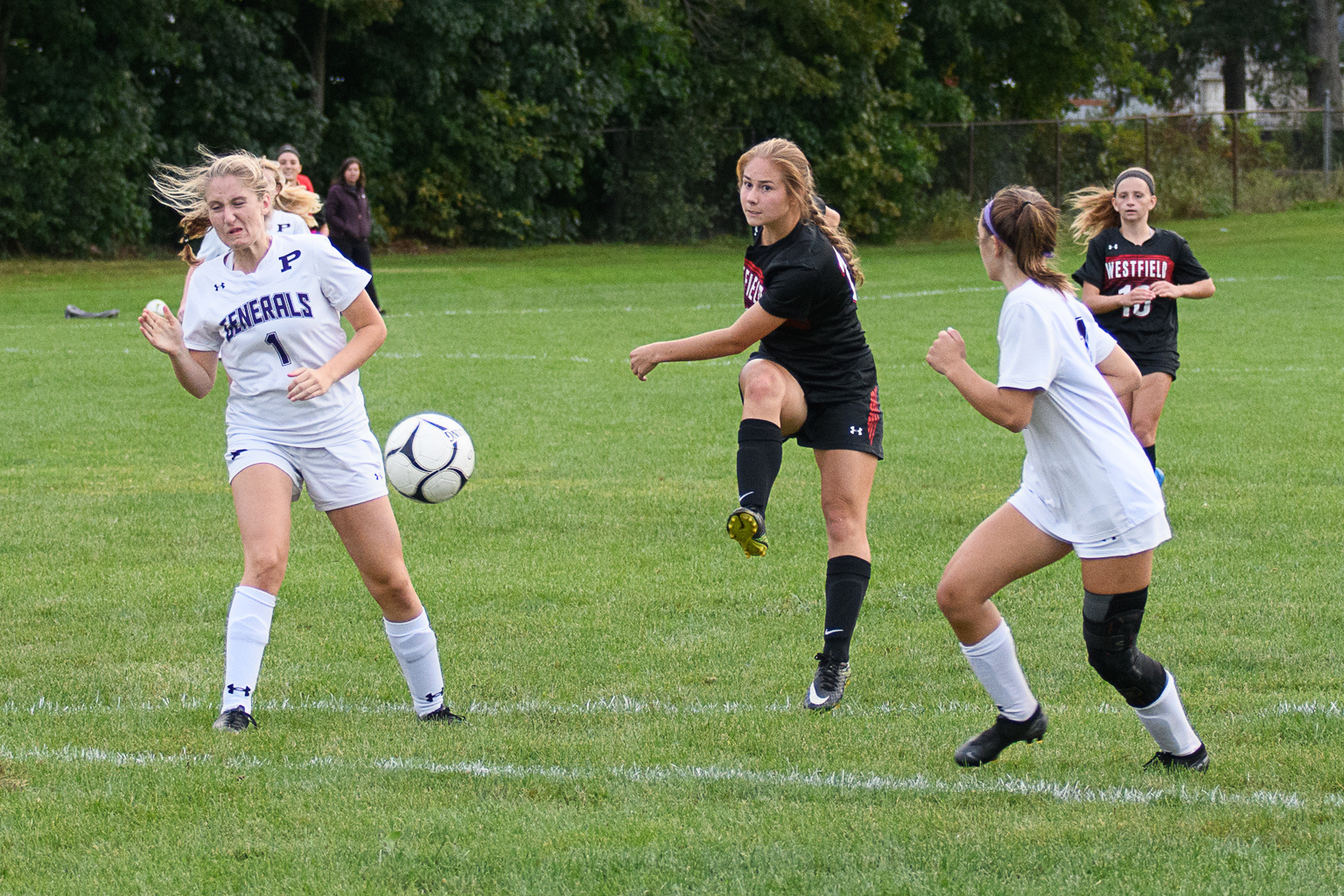 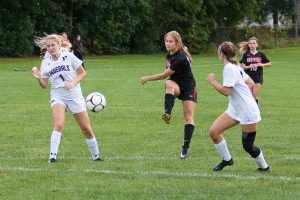 Westfield’s Emma Pedro (11) drives the ball through Pittsfield defenders to score a third goal early in the second half of a girls soccer game Wednesday. (MARC ST.ONGE/THE WESTFIELD NEWS)

WESTFIELD – Milana Camilleri scored twice and Emma Pedro had a hand in three scores, scoring once and assisting on two others to help the Westfield High School girls soccer team net a sorely needed victory Wednesday at home. The Bombers turned back Pittsfield, 4-1.
“Overall, I feel like we did a lot better than we did in the past,” Pedro said, referring to the team’s early season struggles. “It’s a lot easier when we pass.”
Pedro set up Camilleri for the game’s first score in the fourth minute with a nice through ball. Camilleri completed the play by lofting a nice floater into the net from about 18 yards out.
“I just ran on an angle,” Camilleri said. (Emma) slipped me in, I got my head up and looked for the far post.”
Pittsfield attempted to counter with a goal of its own in the following minutes but Westfield goalie Anna Chrisanthopoulos came up with three straight saves. The Bombers nearly doubled up their lead midway through the half when Pedro struck a ringing shot into the upper left corner of the cross bar that ricocheted up and down and out of goal.
With 16:36 remaining in the half, Camilleri scored her second goal to put Westfield up 2-0. Ella Santaniello assisted. Santaniello almost made it 3-0 a short time after when she faked out a defender with a nice move, dribbling and shooting before it was corralled by the goalie. Pedro nearly scored too with a successful stutter-step, but in the end that attempt was also thwarted by Pittsfield.
Pedro notched her second point of the game with 1:37 left in the half, setting up Ryan Prystowski for the score. In the first minute of the second half, Pedro tacked on an insurance goal. Riley Byrnes assisted.
“We just have to work as a team,” Pedro said. “Once we do that, goals will just start to come and we’ll get more opportunities.”
Pittsfield spoiled the shutout with a goal in the 45th minute. Despite yielding the score, Chrisanthopoulos continued to shine. Westfield’s goalie made three diving saves, including a spectacular one on a penalty kick in the final moments of the contest.
“My coach gave me a little trick and I lucked out I guess,” Chrisanthopoulos explained.
One year removed from fielding quite possibly one of their best championship-caliber squads ever, Westfield (2-4) is now rooted in learning from the ground up.
“We had a couple years of a really strong, competitive culture,” Westfield High School girls soccer coach Ryan Lavner said. “Now all those kids are gone with the exception of only a few. …Normally three or four freshmen come in and there’s 16 others that already know the deal. We have five or six kids and a senior that did not play last year and all new kids. So to them, it’s now their group.”
The Bombers head coach said he is trying to instill the right behavior and establish new goals for this year’s unit.
“It’s how you’re warming up, how you’re treating the community,” coach Lavner said. “We’re closer than the scores show but we need everything to go right and we need to play basically perfect to have a chance. Other teams that have more upperclassmen can gamble and take situations. We go into every game like it’s a playoff game and win as many as possible. We’re definitely getting better as the season goes and we’ll get better each year from now on.”