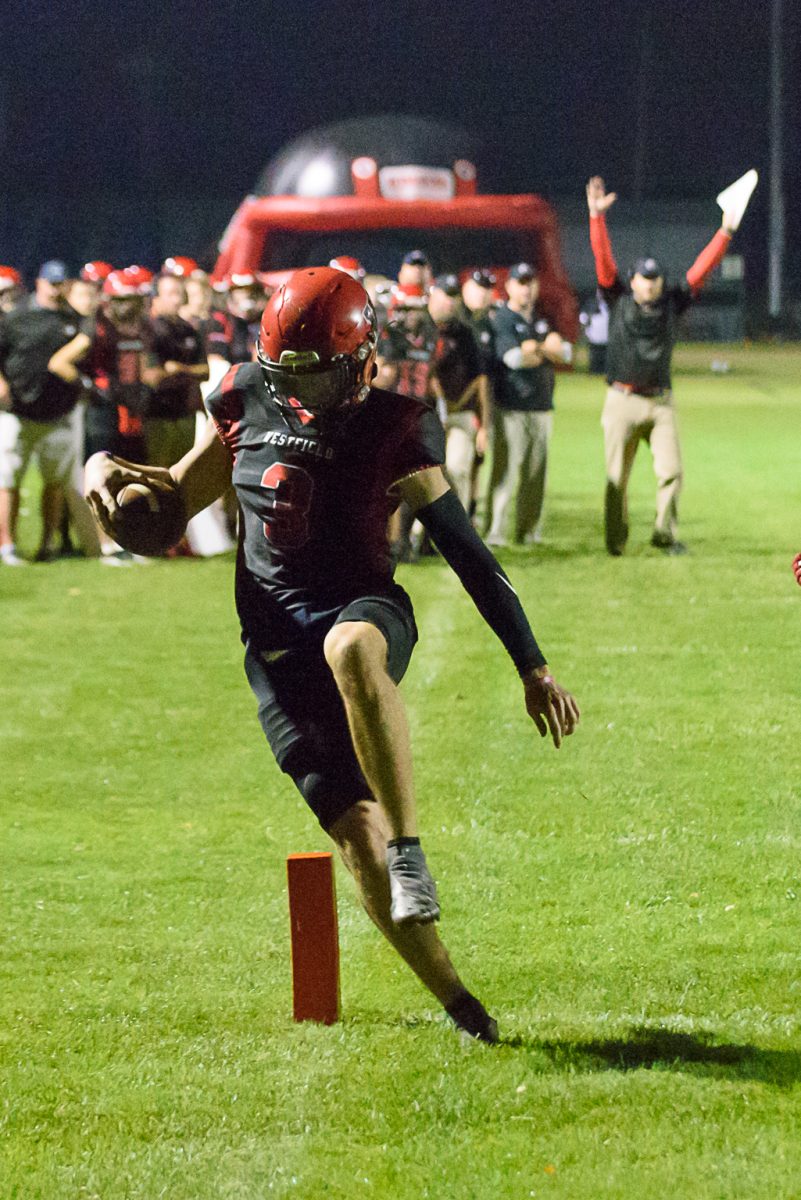 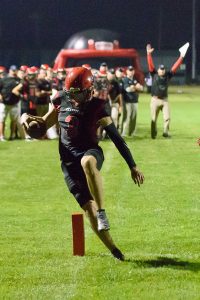 “We practiced to have a two-quarterback set all week,” Westfield High School head football coach Rob Parent said. “I thought we integrated them well. When we needed Andrew, Andrew stepped up and made good plays. Jaxson as a freshman wasn’t afraid of the big lights. He made the throws he needed to make. …I am real confident of his abilities going forward.”
Although the first half was a defensive struggle, Westfield’s new quarterback tandem showed real promise. The Bombers marched 72 yards in 20 plays on their opening drive of the game, only to be stopped inches of a first down on a fourth down play at the Minnechaug 10-yard line.
The drive chewed up nearly nine minutes and took the teams into the second quarter.
Late in the first half, the two Westfield quarterbacks engineered another productive drive. St. Pierre hit senior Matt Collins in stride out along the right sideline for a 35-yard pass play that moved the Bombers into the red zone.
With the final seconds of the first half ticking away, Westfield attempted a 32-yard field goal. Minnechaug (4-2) quickly swarmed the ball though, blocking the kick before the Bombers kicker could even get it up off the ground.
Westfield continued to move the ball well in the second half, picking up small chunks of yardage that equaled one big drive.
On the opening series of the third quarter, the team’s primary ball carrier, Westfield senior running back Ryan Cimini, rushed the ball three straight times to move his team past midfield. St. Pierre peeled off a key seven-yard run. Freshman running back Lucas Guay ripped off a 15-yard run. Scott rushed the ball three consecutive times, the last of which resulted in a 3-yard touchdown run. The score came with 6:12 remaining in the quarter.
“The mindset was just keep grinding, keep grinding and get into the endzone,” Scott said.
Westfield’s defense continued to do the job, thwarting every move that the Minnechaug offense came up with. The Bombers went on to record their third shutout of the season, and have now only allowed a total of just three offensive touchdowns, all to Central.
“For the kids to pick things up as quickly, as solidly as they do is an acumen to their football IQ,” coach Parent said. “I can’t be any prouder of how those kids are playing right now.”
Parent credited defensive coordinators Fran Smith and Tom O’Neill for a big part of the team’s success.
“Coach Smith and Coach O’Neill have done an absolute great job picking the right personnel, putting them in the right places, and executing game plans,” Parent added.
Jacob Fernandez was the latest player on defense to emerge, making a late game interception to secure the victory for Westfield. St. Pierre put the game out of reach with a one-yard touchdown plunge.
Once the final seconds ticked away, Westfield players stormed the field. Bombers assistant offensive coordinator Troy St. Pierre embraced his son, Jaxson, with a celebratory hug.
“We just want to keep going,” Jaxson St. Pierre said. “The train’s on the tracks already. We just want to keep pushing along.”

BOYS SOCCER
Tigers chase Gators
Westfield Technical Academy 2, Gateway 0
Westfield Tech scored on a corner kick and then David Bulatov broke free at the top of the box and finished in the back of the net to make it 2-0 at the half of a game which had the feel of a tournament atmosphere.
Liviu Mocanu played solid in net for Westfield Tech, making several legitimate saves to secure the win, including one in the first half on a wide-open shot from 10 yards out and three others getting to the upper 90s in the second half.
“We beat a solid team today,” Westfield Tech coach Kyle Dulude said. “It was a great win for us.”
Gateway goalie Preston Coffey finished with 10 saves.