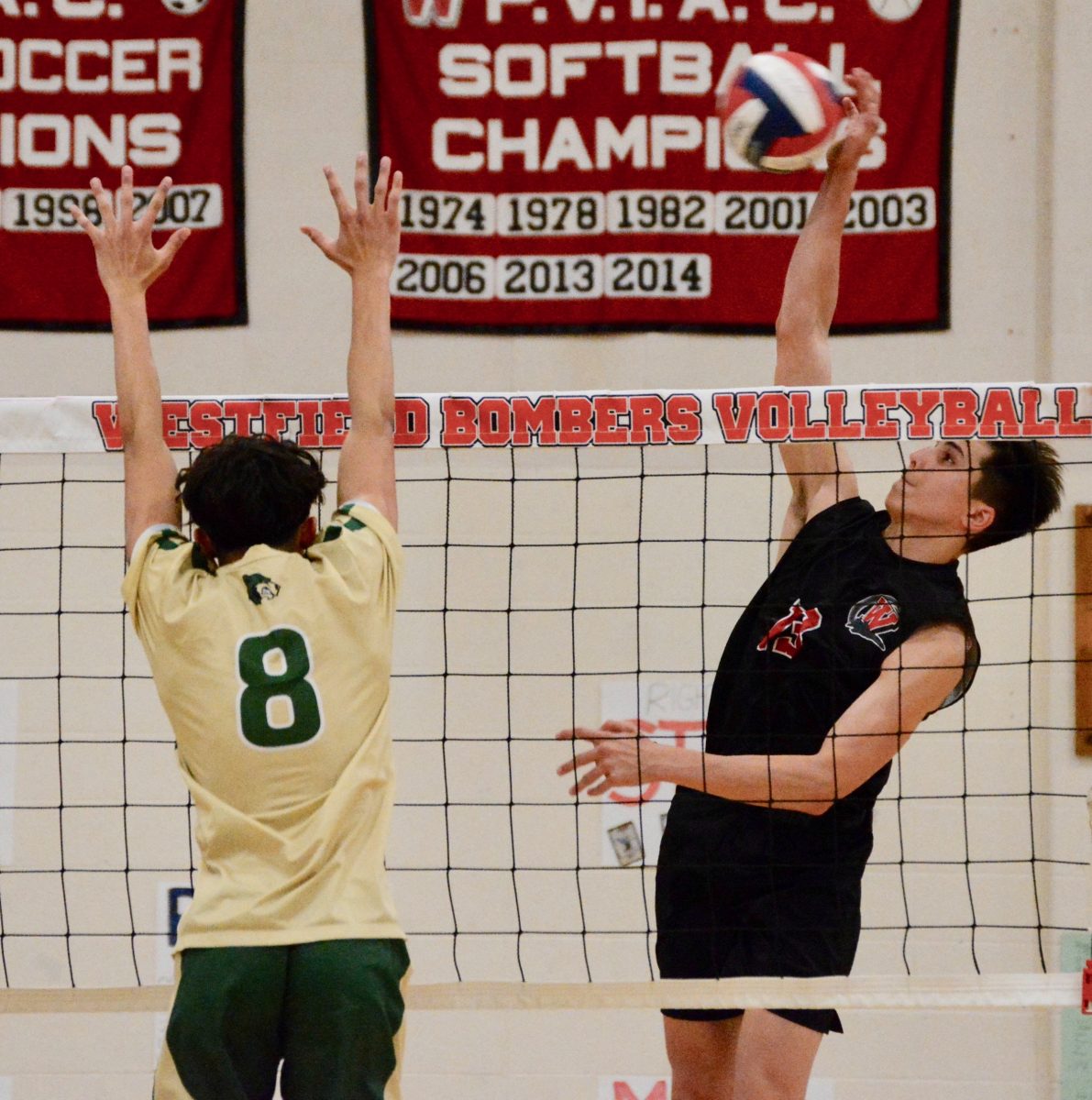 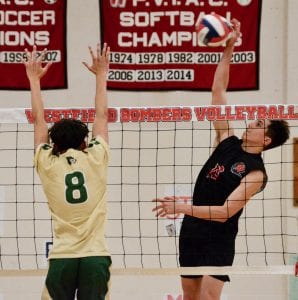 WESTFIELD – It appears that the postseason has arrived earlier than anticipated for the two-time defending state champion Westfield Bombers boys volleyball team.
Westfield High School knocked off previously unbeaten Greater New Bedford, considered by many as the state’s best, in a “Senior Night” thriller Friday, 20-25, 25-16, 26-24, 23-25, 15-10.
“We’ve had a lot of five-setters of late, but that’s what you get against quality teams,” Westfield coach Tyler Wingate said. “High stress situations are good to play in. It’s good to struggle a bit. That’s kind of what you want at this time of the year, is not to win every rally but to know you play it well.”
The Westfield Bombers saved their best for last, putting up some of their highest stat totals of the season.
Ethan Flaherty set a career high with 23 kills. James Pavlyuk tied a career high with 27 kills and notched five aces. Eric Yurtuc compiled 52 assists and three blocks. Ryan Rix put together a soilid all-around effort, finishing with seven kills, three aces, and five blocks. Alex Robitaille and Mike Bowen contributed 12 digs apiece. Robitaille also had three aces.
“Guys have really stepped up to develop over the year,” Wingate explained. “We lost a lot of good players last year, but the expectations don’t really change. We expect to play at a high level, a championship level. We hope that is good at the end of the day. … Hopefully that prepares us for what’s ahead.”
“We went toe-to-toe with two of the best teams in the South,” Wingate added. Ultimately that’s a good thing at the end of the day, but we still have a tough road ahead of us.”

BASEBALL
Rams punch tourney ticket
Southwick 11, St. Mary’s 1
Southwick’s Bart Shea went 2-for-3 with a home run, a run scored, and a RBI;
Nick Michaels (2 walks, 2 runs, RBI), Zach Karetka (RBI), Dan Burnett (walk, run, RBI), Dominic Vercellone (walk, 2 runs, RBI), and Josh Lis (double, walk, 2 runs) each had a hit as the Rams qualified for the postseason with their 10th win of the season. They improved to 10-7.
Lis earned the win on the mound, allowing just three hits, one walk, and one run over five innings. He recorded five Ks.
Sam Mizonoglu tossed two innings of scoreless relief. He struck out five batters, allowed one hit and no walks.