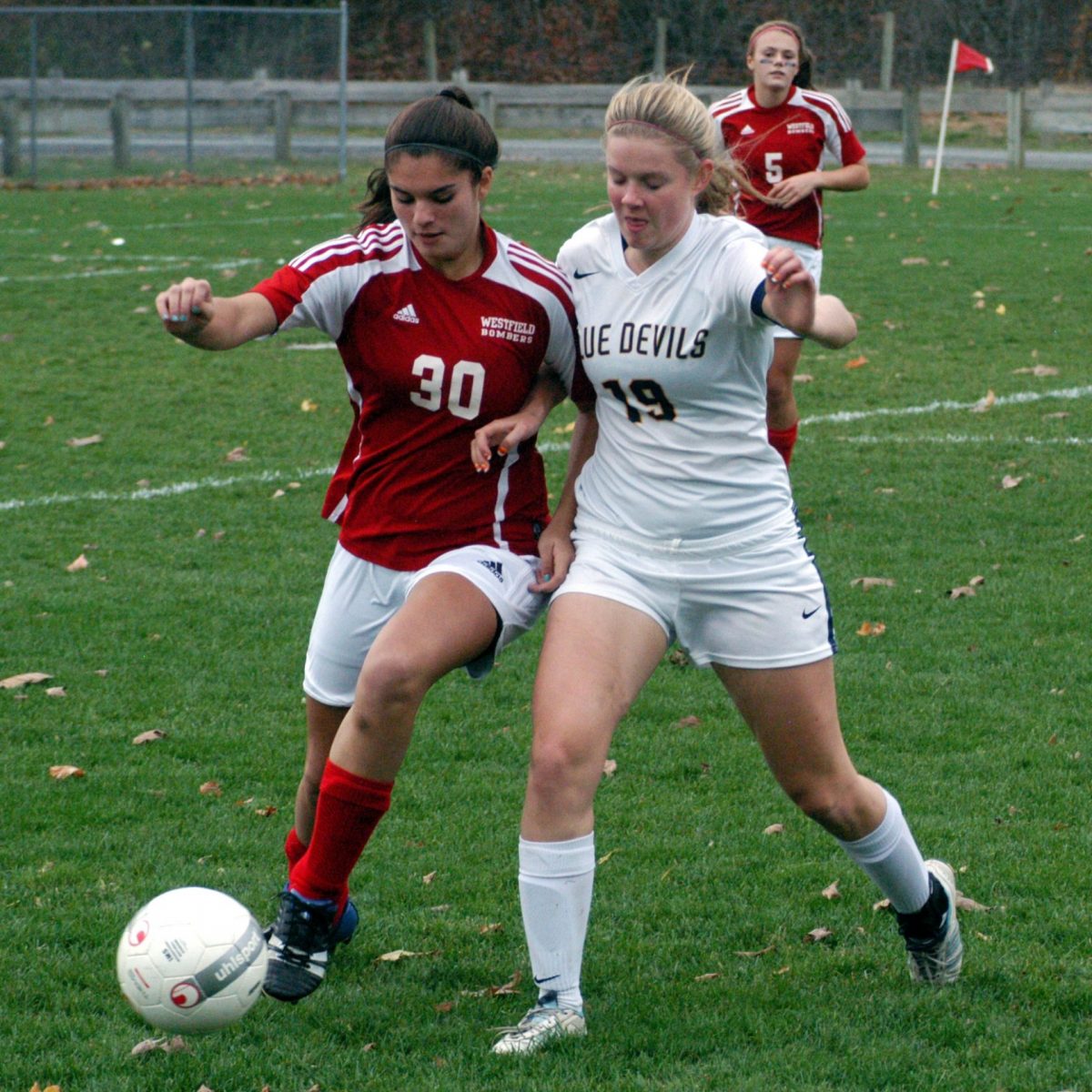 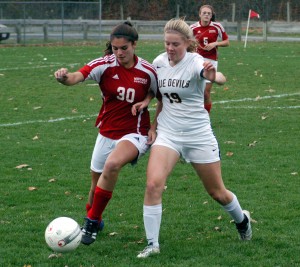 NORTHAMPTON – The Westfield High School girls’ soccer team blew into Northampton and escaped with a key 1-0 victory on the season’s final day yesterday.
It was only the second loss of the season for the Blue Devils (14-2-2). The Bombers improved to 9-6-3.
“It’s real important psychologically,” said Westfield coach Keith Saltmarsh, whose Bombers lost to the Northampton Blue Devils 1-0 earlier this season. “We finish with another win against a quality opponent. It’s really important.”
Karly Diltz netted the game-winner for Westfield, floating a corner kick between the legs of Northampton goalie Maya Kerstetter in the 35th minute. The shot caromed off the goalie’s legs and into the back of the net.
The goal was the result of a relentless offensive surge from Westfield on a blustery afternoon with remnants of Hurricane Sandy still lingering in the area.
Bombers’ Becca Sullivan cleared the ball from the defensive backfield to McKenzie Saltmarsh, who drilled a beautiful laser top shelf. The goalie tipped the ball up and over the net, setting up the corner.
“The goal wasn’t the prettiest of goals,” said coach Saltmarsh. “The pressure we applied to them throughout the game may have caused a difference.”
In the second half, Northampton stepped up its offensive attack. The Blue Devils attempted corner kicks, a direct kick, breakaways, but came up empty.
Westfield’s defense, led by Jessie Pratt, thwarted every attack. And Bombers’ goalie Amelia Tooker stopped every shot, collecting 12 saves (six in each half).
“Amelia stood strong in goal,” coach Saltmarsh said. “She made the saves she had too.”
Next up for Westfield: the Western Massachusetts Division I playoffs. Tournament seedings are expected to be announced later Wednesday.
Said Saltmarsh: “We’re coming together.”

PLAYOFF UPDATE: The Division III state golf championship has been postponed until Monday at Redtail Golf Course in Devens, Mass. A shotgun start is scheduled for 10 a.m. The Western Mass. champion St. Mary Saints will compete. …The Westfield High School field hockey team was seeded sixth in the upcoming D1 tourney. The Bombers (8-8-2) will play at No. 3 Northampton (14-1-3) in the opener Friday at 3 p.m.