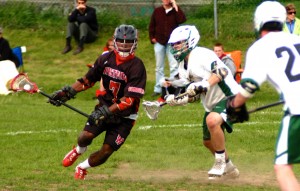 Westfield’s Rashaun Rivers (7) slices through the middle of the field before scoring the first goal of the game against host Minnechaug Monday. (Photo by Chris Putz)