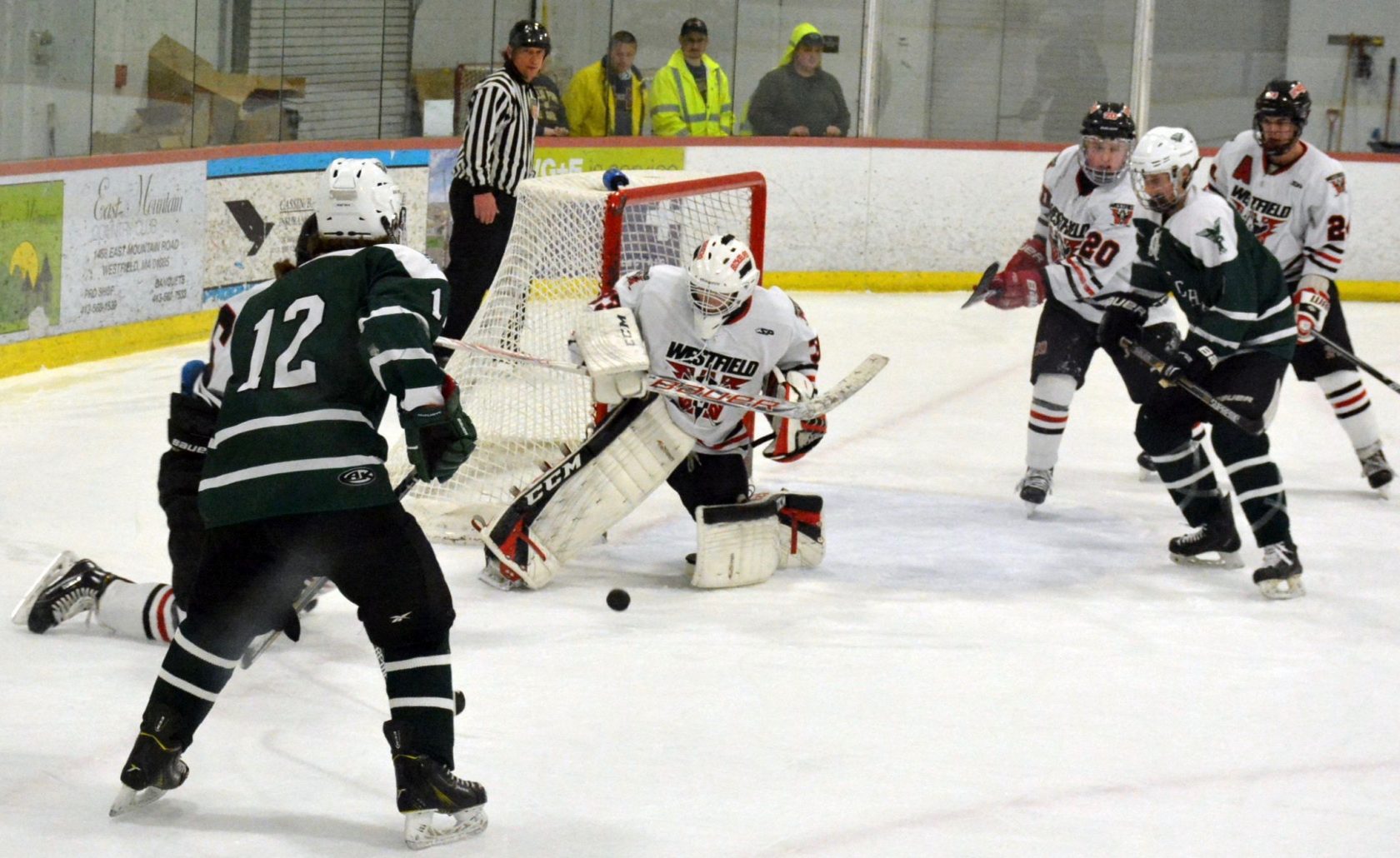 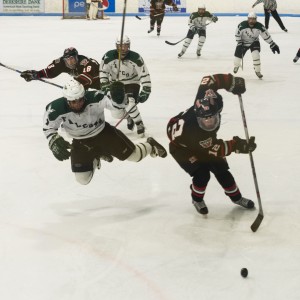 Westfield’s John Danahey (12) looks to take control of the puck as a Falcon looks to swoop in from behind. (Staff File Photo)

WESTFIELD – Something has to give.
The Minnechaug Falcons have not won a high school boys’ ice hockey championship since 1999. The Westfield Bombers have won several titles under the leadership of longtime head coach C.B. “Moose” Matthews during that time.
This season, the two teams met twice. Minnechaug won both meetings, including a come-from-behind victory late in the season against Westfield.
The Falcons and Bombers will meet again Thursday night for the final time this season for all the marbles in the Division 3 West Sectional championship at the Olympia in West Springfield at 8:30 p.m.
Based on regular season records alone, Westfield was not expected to be here. The Bombers slipped into the postseason with a losing record of 9-10-1, qualifying for the tournament after winning a tiebreaker against Ludlow in the Berry Division standings.
Westfield was not supposed to advance in the tournament either.
For several years, when Westfield was not dominating the Berry Division, Longmeadow often sat atop the division.
Top-seeded Longmeadow appeared to be on its way to reclaiming that throne again, finishing the regular season with a 15-4-1 record, and dominating Westfield early in the semifinals. The Bombers, who fell behind the Lancers 2-0 in the semifinal round, rallied for three unanswered goals to post a thrilling – and stunning – 3-2 double overtime victory. 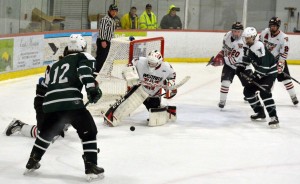 Westfield goalie Cameron Parent attempts to make a save in a January 6 home game against Minnechaug. (Staff File Photo)

It was one of the team’s greatest comebacks.
“This is one of the best wins I’ve ever had in the 28 years I’ve been here,” said a jubilant coach Matthews, following last Thursday night’s thriller. “I’ve had teams with more talent but this one is made up of blue collar workers who never quit on us.”
It will take another united effort for Westfield to take home another trophy.
“All year we have battled adversity,” said the semifinal hero left-winger Liam Whitman, who scored the game-winner in the second of two overtime periods against Longmeadow. “No one believed In us. No way we were losing the game (against the Lancers).”
“All that matters now,” said Whitman, “is to beat Minnechaug.”
If Minnechaug does manage to capture the D3 title, it will be the first time in 16 years that someone other than Westfield or Longmeadow – other than 2015 champ Agawam – will have claimed that crown.
Something has to give … right?