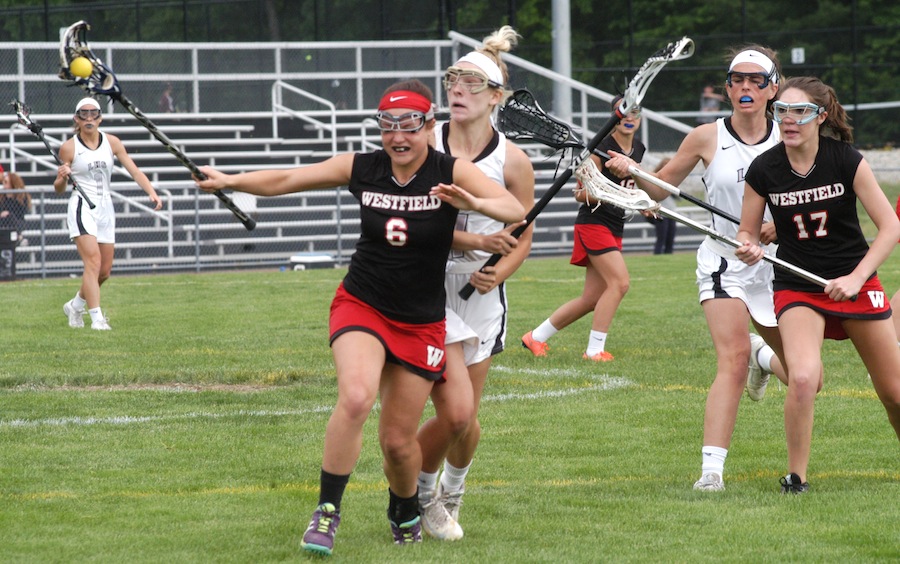 LONGMEADOW – The second-seeded Longmeadow Lancers (19-1) demonstrated why they are the cream of the crop in Western Massachusetts’ girls lacrosse, scoring 13 of the game’s first 14 goals of a Central-West Division 1 quarterfinal en route to a 19-5 win over No. 7 Westfield Saturday.
Longmeadow built an early lead, scoring early and often en route to a 13-1 half time advantage. Kay Conway, Allison Tetreault and Claire Fitzpatrick led the scoring attack for Longmeadow, tallying five points apiece. Ilana Kofman (4 points) and Jenna Joseph (3 points) also had key contributions for the Lancers. 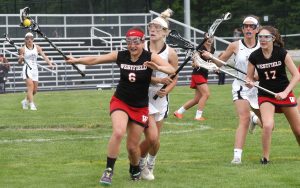 Westfield’s Marissa Otero (6) keeps the ball away while trying to find an opening against Longmeadow in a Division 1 girls’ lacrosse quarterfinal Saturday. (Photo by Jeff Hanouille)

Westfield’s offense came courtesy of sophomore Kylie Buchanon, who had 4 goals, while senior teammate Olivia Chaoush scored the other lone goal for the Bombers. Chaoush ends her high school career with 168 points.
“Unfortunately Westfield’s historic season has come to an end, the same way it started – with a loss to Longmeadow,” Bombers’ coach Paul Fenwick said. “As far as we’ve come this year, obviously we have a ways to go.”
“The girls never quit,” he added. “They never gave up, and now with the loss I think they’re even more inspired to work harder in the offseason to help close this gap.”