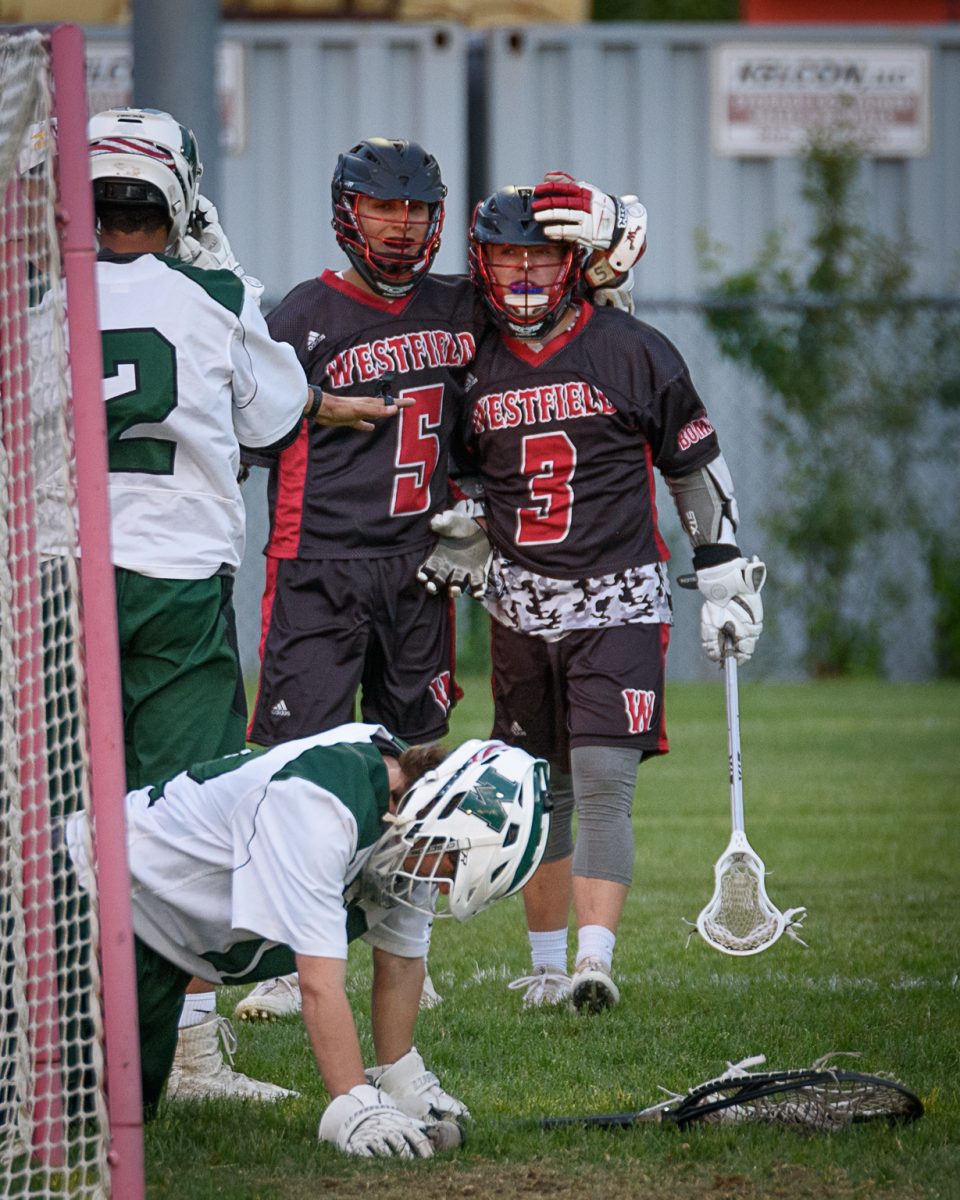 WILBRAHAM – Westfield junior goalie Alex Beauchemin did everything but stand on his head or do cartwheels, and the sixth-seeded Bombers escaped Minnechaug with a thrilling 5-4 win over the third-seeded Falcons in a Central-West Division 2 boys’ lacrosse quarterfinal Saturday night.
Beauchemin made 11 saves, several of which came on one-on-one situations, each one proving to be more important than the next.
“It was a great team effort,” Beauchemin said. “(I) couldn’t have done it without all of these boys. … (I) loved having them out there to defend me.”
Close defenseman Mitch Weiss, Gavin Carzello, Kris Meneses, and defensive middies Tyler Shrewsbury, Dan Antonellis, and Zach Cree locked down Minnechaug’s offense with one of the most physical efforts displayed in some time.
“It’s crazy,” Beauchemin said. “Every time we play these guys it’s huge. You know it’s going to be tough coming into it, and we stepped up.” 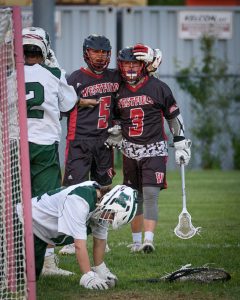 Westfield’s Matt Bonsall (5) and Zach Gentle (3) teamed up for four of their team’s five goals en route to a thrilling 5-4 win over Minnechaug in a Central-West Division 2 boys’ lacrosse quarterfinal Saturday in Wilbraham. (Photo by Marc St. Onge)

Westfield took the first step against Minnechaug when Matt Bonsall muscled his way past three defenders down low and found the back of the net for the first goal of the game 4:03 into the first quarter.
Minnechaug tied it 1-all with 1:23 remaining in the quarter on a sidearm slingshot from Andrew Fidalgo.
In the second quarter, Fidalgo cut across the center field out in front of the Westfield net and tallied a go-ahead goal with 9:49 left in the half.
Westfield put forth a workman-like effort over the next two minutes. The effort paid off as Zack Gentle found the back of the net to tie the game 2-2.
With a one-man advantage, Westfield’s Landon Reyes gave his team the lead, scoring with 4:55 remaining in the half.
Minnechaug’s Connor Moriarty managed to force another tie with a goal with 7:02 on the clock in the third quarter. Gentle reclaimed the lead for Westfield with 3:25 left in the quarter. Fidalgo tied it with a score with 8:37 remaining in regulation.
Bonsall was on the receiving end of a pair of quick passes as Westfield took the ensuing faceoff and scored the eventual game-winner just seven seconds after Minnechaug’s score.
“Any time we play Minnechaug, especially in the playoff – they’re our rivals – we anticipate this kind of game,” Westfield coach Mark Cavallon said. “Alex … and our defense – they were just super.”
Said Beauchemin: “We got a lot of heart in us. (We’re a) young team (with a) lot of fight. We want to keep going.”
Westfield will travel to Shrewsbury to take on No. 2 St. John’s (15-3) in a semifinal matchup Tues., June 6 at 4 p.m.