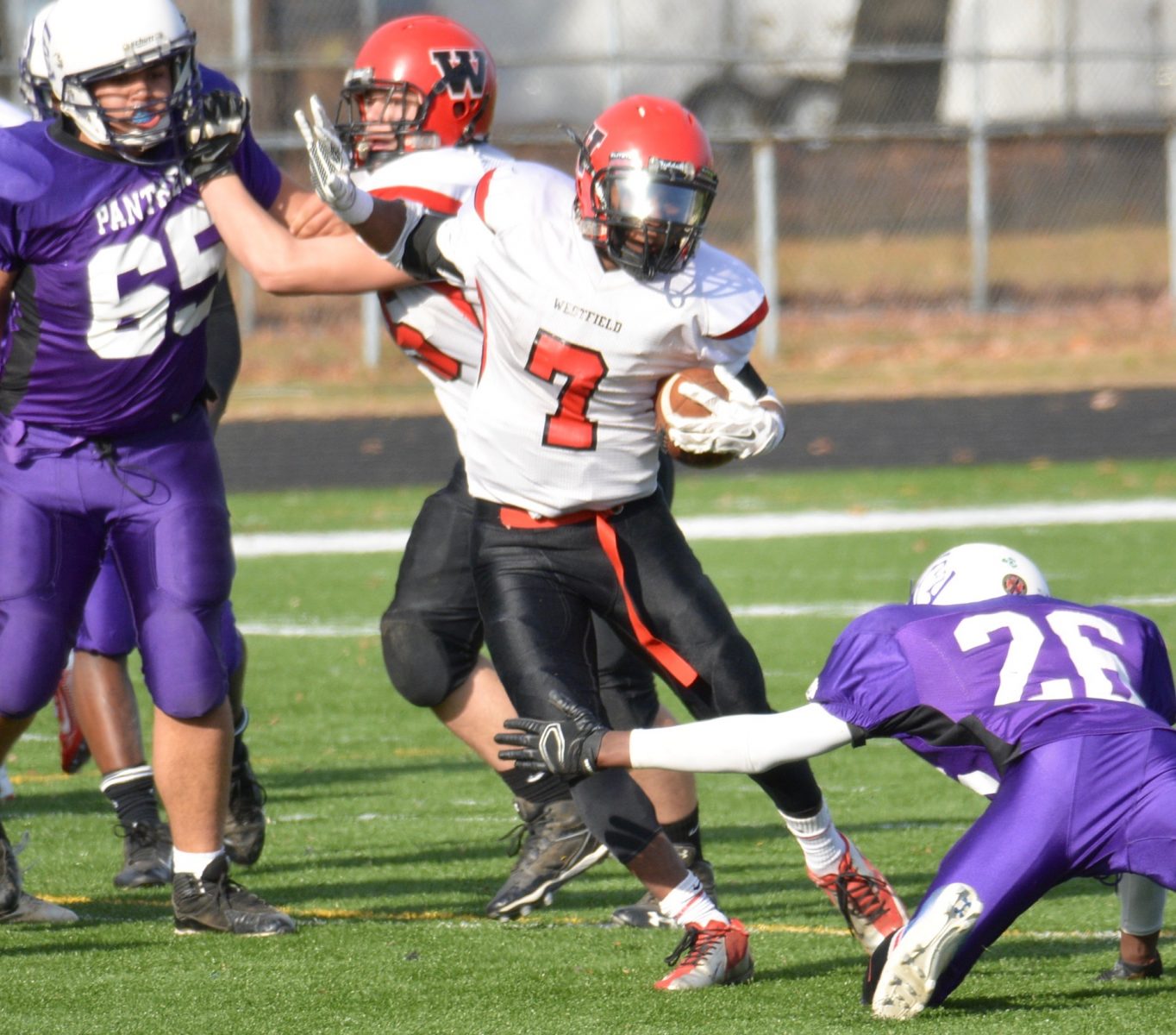 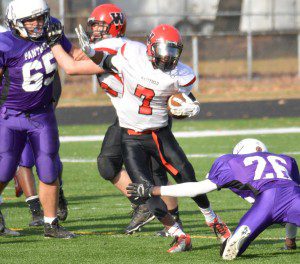 SPRINGFIELD – For generations to come, this Westfield-Cathedral high school Thanksgiving Day game will be remembered forever.
On Thursday, Westfield created a lifetime of memories with an epic 50-0 win over the Cathedral Panthers at Central High School.
It was the final meeting between the two teams on Thanksgiving Day as Cathedral and Holyoke Catholic high schools are set to soon merge into one school, Pope Francis. It is anticipated that football will be dropped by the program, according to school officials.
Bombers junior quarterback Austin St. Pierre, who battled injuries for much of the 2015 regular season ran the offense to near-perfection. St. Pierre rushed for three touchdowns, and threw for another – a 71-yarder – against Cathedral.
“We will be remembered for going out on a good note (in this series),” St. Pierre said. “We will go down in history.”
“The fact is that we scored more points than last year.,” he said. “That was our number one goal.”
Westfield surpassed its 48-point shutout of Cathedral in 2014 with Thursday’s rout. The Bombers, who have now won nine straight in the turkey day classic and 14 of the last 15 contests – end the series with an all-time mark of 44-28. They end the season on a three-game win streak after starting the season 0-8.
“There’s no question that this team is a totally different one than the one we had earlier in the season,” Westfield coach Robert Parent said. “Our kids battled and regrouped. It all came to fruition the last three weeks of the year … Anything anyone is going to remember is the last (Thanksgiving Day) game.”
It was an inauspicious start for Westfield.
The Bombers were stopped on their opening drive, and were intercepted deep in Cathedral territory on their second possession. But it was all down hill from there for the Panthers.
With 5:37 remaining in the opening quarter, Cathedral snapped the ball out of the end zone, resulting in a safety. Then with 1:49 left on the first quarter clock, St. Pierre broke free for a 14-yard touchdown run, the team’s first of many on the day. The Bombers led 8-0.
Westfield built on its late first quarter success in the second quarter when St. Pierre scored on a short 3-yard TD run with 5:32 remaining in the half. St. Pierre’s 2-point run made it 16-0.
Late in the second quarter, Westfield senior safety Dylan Wainscott intercepted the ball, setting up the Bombers deep in the red zone to begin the drive.
Westfield junior running back Wilton Royal scored on a 2-yard scamper with 3:11 remaining in the half. Following a 2-point conversion, the Bombers led 24-0.
Wainscott continued his heroic effort, intercepting a ball near midfield and returning it nearly half the length of the field and crossing the goal line to give his team a 30-0 lead. Another 2-point try made it 32-0.
Just when it appeared Cathedral might make it out of the half with somewhat of a manageable deficit, Westfield effectively squashed the Panthers’ hopes with a safety with 50 ticks on the clock and a 71-yard TD catch-and-run from Zach Adams in the waning seconds of the half. St. Pierre delivered the ball to Adams on a screen pass, and Adams took it all the way into the end zone. The Bombers tacked on a 2-point run for a 42-0 advantage.
Westfield added one more score in the second half, a four-yard keeper from St. Pierre. A 2-point run, the Bombers’ final points of the game, resulted in a 50-0 lead.
“We went in and played a good game,” said Wainscott, who earned top defensive honors for his effort against Cathedral. “It was a rough first quarter, but once we got into the flow of the game, we played better.”
St. Pierre was the named the Bombers’ Offensive Player of the Game.