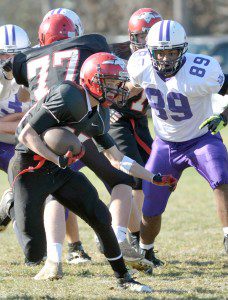 WESTFIELD – The Westfield High School football team enjoyed another holiday feast.
Westfield won its sixth straight Thanksgiving Day game and 10th in its last 11 holiday “bowls,” soundly defeating Cathedral 46-14 on Thursday at Bullens Field.
Senior halfback Quinn Barbeito rushed for 118 yards and one touchdown on eight carries and had two receptions for 72 yards and a TD to lead Westfield (3-8).
“We practiced hard all week,” said Barbeito. “We knew we had to get a win on Thanksgiving. We’ve won our past five games on Thanksgiving – we couldn’t lose. Coach (Bill Moore) told us to score fast and go after them – we did.”
Barbeito credited the offensive line and the team’s no huddle approach to his success.
“Cathedral definitely couldn’t keep up,” he said. “We kept them away.”
Westfield’s lone failure occurred on its opening series, being thrown for a loss on a fourth down try, despite runs of 17 and 29 yards from Barbeito. But the Bombers’ special teams unit broke through when Cody Neidig returned a punt 39 yards for the game’s first touchdown and a 6-0 lead with 7:12 remaining in the first quarter.
Westfield junior quarterback Jake Toomey scampered into the end zone for successful 2-point conversion and an 8-0 lead.
“You always have to come in thinking you’re playing the number one team,” Neidig said of his team’s approach to facing 1-9 Cathedral.
On its second possession, Westfield started from its own 32 and needed just six plays to make it 14-0. Barbeito took it in from 25 yards out with 2:09 left.
In the second quarter, Westfield drove 58 yards in six plays and scored when Ben Geschwind rumbled into the end zone from three yards out. The extra point made it 21-0 with 2:40 remaining in the first half.
Westfield’s special teams unit made heads turn again when Rashaun Rivers returned a punt 38 yards for a touchdown, but a penalty wiped out the play. Still, the Bombers needed just two plays to score.
On its first play, Toomey dumped off a five-yard pass to Barbeito. The senior half back lateralled the ball to Rivers, who raced 21 yards to the Cathedral 4-yard line. Carl King took the ensuing handoff and scored. The Bombers led 28-0 at the 1:31 mark. Neidig intercepted the ball to end the half.
The second half featured much of the same.
Westfield scored on its opening possession, thanks to Jack Templeton’s six-yard touchdown run. The key play on the drive was a 20-yard run from Barbeito.
And the rout was on.
One series later, after forcing a 4-and-out, Westfield drove the short field and scored on John Toomey’s five-yard run. The Bombers led 40-0.
Cathedral finally cracked the goose egg on the scoreboard late in the third quarter, scoring on a 54-yard touchdown pass from Cullen Burke to Alexander Provost with 46 ticks on the clock. The Panthers’ 2-point conversion was successful.
Westfield’s response was fast and furious and it featured – not surprisingly – a long kickoff return from Barbeito. Barbeito followed with a catch-and-run on the first play from scrimmage, hauling in a short pass and running 43 yards for the touchdown. The Bombers led 46-8 with 13 seconds left in the third quarter.
Cathedral fullback Ben Roberts added a one-yard score late.
“It was nice to get to see some seniors,” said coach Moore. “Especially for Jack Templeton, who scored his first touchdown of the season, and Carl King, who has battled liver disease. “We’ve had our ups and down in the wins and loss column. But these guys are going to be very successful off the field.”