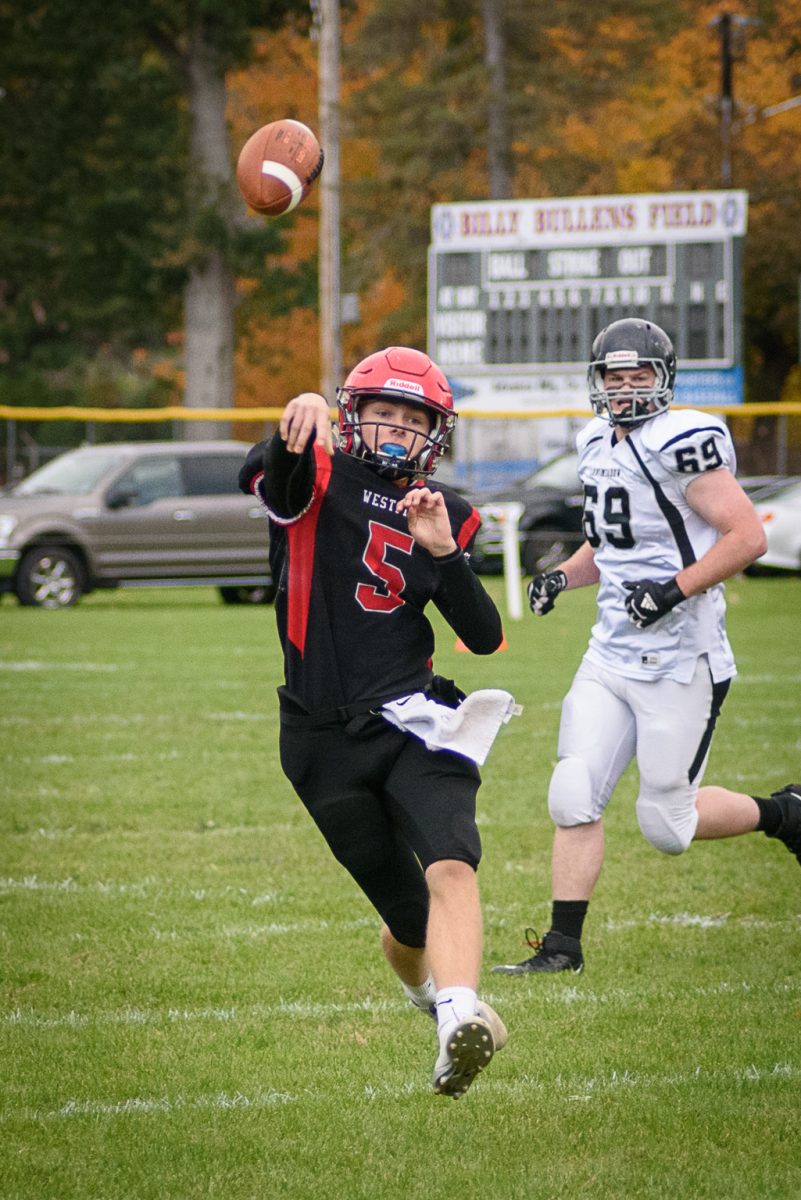 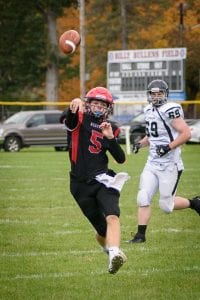 Westfield quarterback Matt Adamites (5) fires off a pass under pressure against Longmeadow during a 2019 regular season contest at Bullens Field. Adamites and the Bombers will kick off the 2021 high school fall football season Friday against Amherst at Bullens Field. The game will begin at 7 p.m. (THE WESTFIELD NEWS FILE PHOTO)

WESTFIELD – After a long, suffering COVID and injury riddled 2020-21 campaign, the Westfield High School football team is back to kick back the competition and kick off the 2021 fall sports season.
“We are taking it like a normal year,” Westfield High School football head coach Rob Parent said. “We have had a normal camp with normal restrictions. Our approach is to win rep after rep. You win enough of them – – you win the day. Our goal is to make sure we get better every time we step on the field.”
Westfield returns to the field this fall with a senior-laden team. Some 17 players are expected to suit up for the Bombers this season.
Versatile senior quarterback Matt Adamites returns for Westfield. Adamites helped engineer several big victories for the Bombers, often only stumbling against some of the area’s toughest teams like Central or Minnechaug.
“He’s a heck of an athlete,” coach Parent said of his senior QB. “He can run, he can throw, and he has good pocket presence. …When he tucks the ball and runs, he is a dangerous runner. That is a huge difference in this league. …Consistency is going to be the key.”
Adamites will be aided by a solid wide receiver core which features the likes of senior captain Andrew Scott, seniors Matt and Michael Collins, junior Conor Connally, sophomore Antonio Adams, and freshman Kash Kelly.
Senior running back and co-captain Ryan Cimini also returns for the ’21 season.
“Ryan is just a solid football player all-around,” coach Parent said. “He might be the most in tune with our playbook offensively and defensively.” Senior Josiah Alvalle and freshman Lucas Guay are also expected to be involved in the team’s rushing attack.
Adamites, Cimini, and the rest of the Westfield skilled offensive players will be operating behind a solid offensive line, comprised of sophomore left tackle Jadon Gibbs, senior left guard Connor Ward, freshman center Declan Connally, senior guard/co-captain Sean Daly, and senior right tackle Dylan Arooth.
“We have a good mix of (offensive linemen),” coach Parent explained. “We are athletic, we have some size up front, and they’re having fun with it. This group is well-coached and seems to be getting along quite well.”
As far as the defense is concerned, stability is key. This unit returns more than a half-dozen starters. “They look sound,” Parent said. “It’s just going to come down to the fundamentals of the game. …We hope to see a lot of growth.” 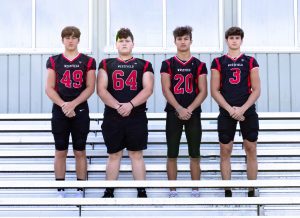 Westfield will be put to the test right from the very start. The Bombers kick off their season Friday night against 2019 Division 5 Super Bowl representative Amherst at Bullens Field. The game begins at 7 p.m.
“It’s going to be a tough test for the opener,” Parent said. “They have a really talented quarterback who is athletic, two very talented wide receivers who are also athletic, they’re big up front … and they have former Minnechaug coach Mike Dublin,” Parent said. “Games like this you have to start fast, get after it quick, and garner momentum in the first game as fast as possible.”
Getting off to a fast start will be critical to Westfield’s success this season. The Bombers have an especially challenging schedule with road contests at Northampton (Sept. 17) and Pittsfield (Sept. 24) in consecutive weeks, Central (Oct. 8), and Longmeadow (Oct. 29). They host Holyoke (Oct. 1), Minnechaug (Oct. 15), and Chicopee Comprehensive (Oct. 22).
“It’s vital to us from both a momentum standpoint and confidence standpoint to start the season in the right direction,” Parent said. “This might be arguably the toughest schedule since 2018 when we played Leominster, Longmeadow, and Central. We need to build confidence … and a rhythm by working together.”
There are other key factors which may figure in this team’s success, the Bombers head coach said.
“My old principal used to say the toughest of a town was measured by who turns out on a Friday night. Toughest towns were the toughest football teams,” Parent said. “As a player it is huge to have the support of the community. You can feel that on the sideline. To have the community rally and support you in defining moments of the game are critical. …Everyone feeding off that energy is a definite game changer.”
And let’s not forget the Westfield High School marching band.
“The band,” Parent said. “That’s what makes the game the game. That’s a difference maker.” 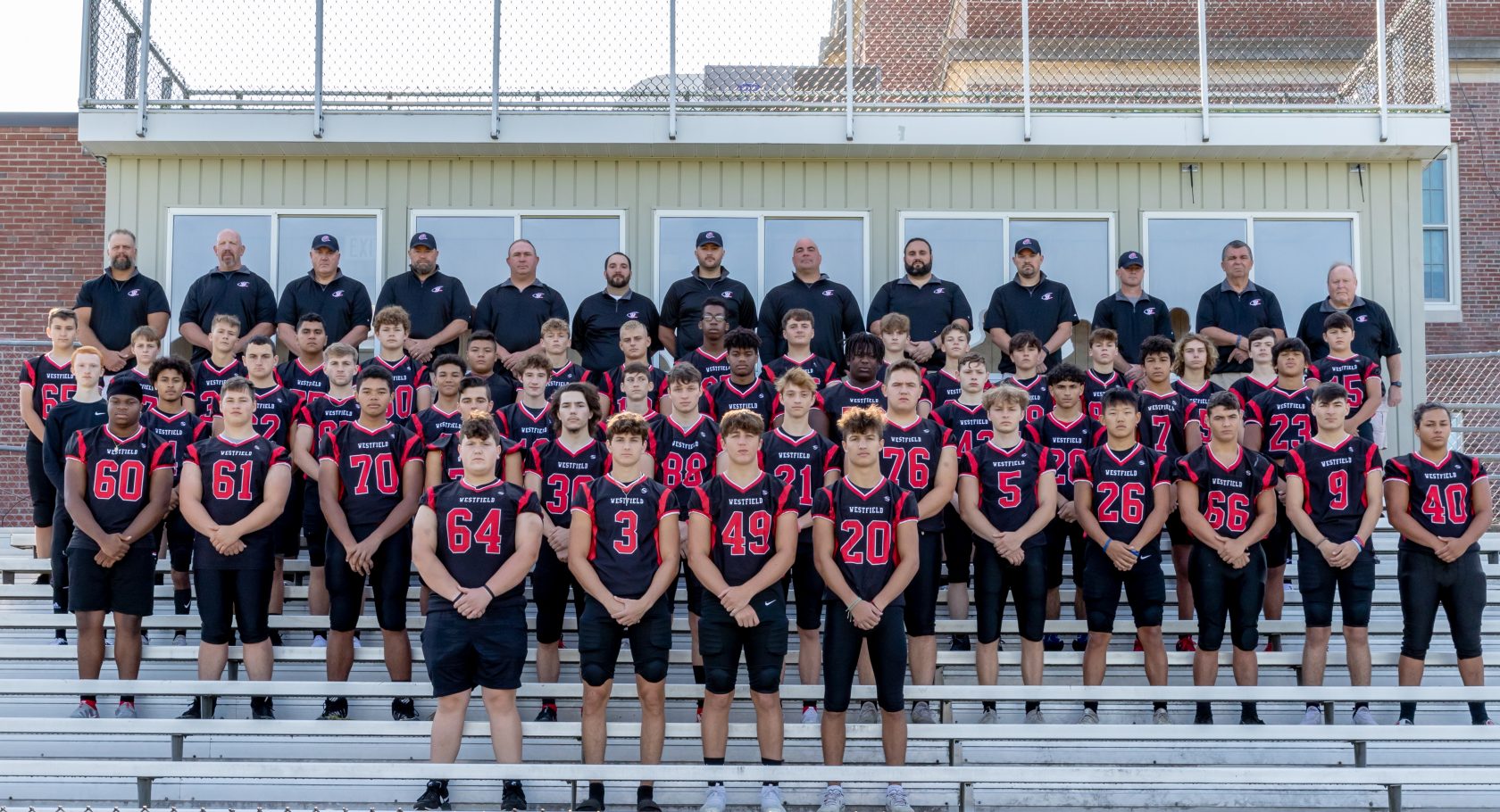