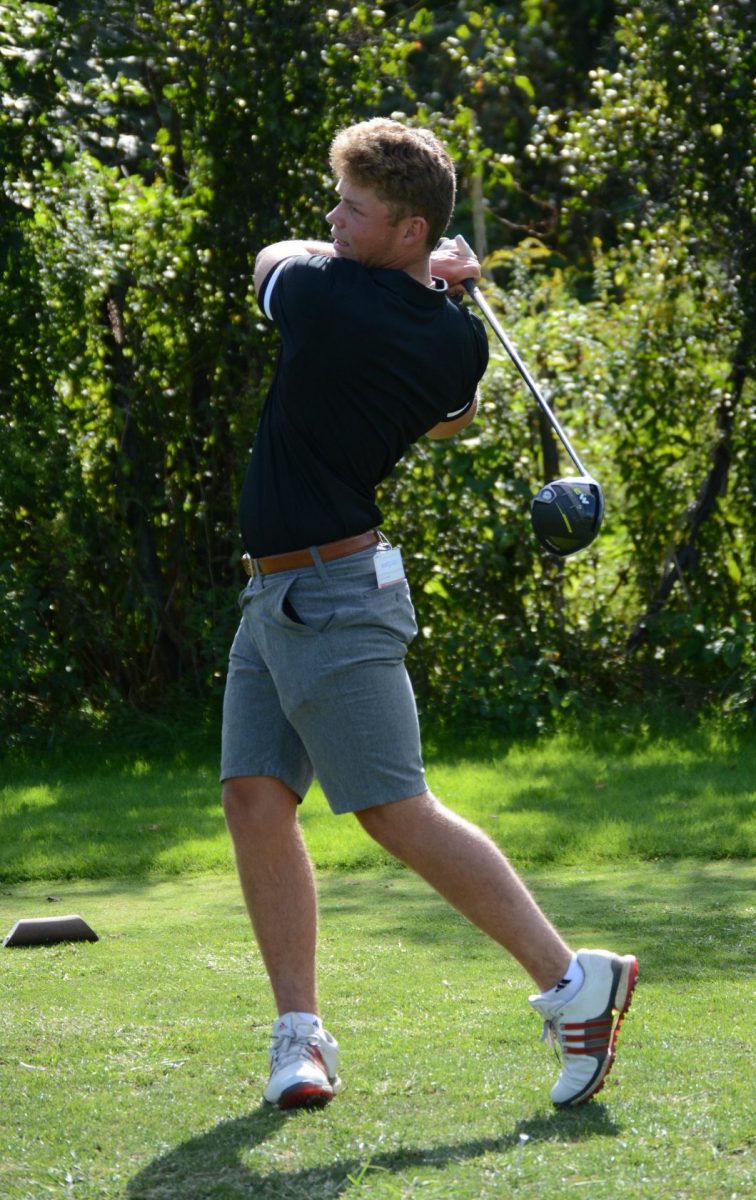 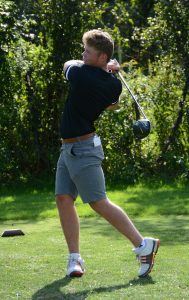 WESTFIELD – Although Westfield senior golfer Jeremy McCormick might prefer the diamond over the links – – the team captain is also an outfielder for the Bombers – – he appears to be managing nine (holes, not innings) just fine.
McCormick shot a 5-over 36 from the No. 3 spot on the front nine at Tekoa Country Club to lead the Westfield High School golf team Tuesday. The Bombers lost to the Minnechaug Falcons, 160-169.
“I feel like I played better than I scored, but I will take the 41,” McCormick said. “The course was a little soft, but my putting was fine.”
Although McCormick hit a rough tee shot and had to three-putt on the fifth hole, he birdied the fourth.
“I need to focus on what I can do to avoid the big numbers and put up a score I feel comfortable with,” McCormick said. “Our first match is not going to be an indicator (of future success). I think we are going to compete with all the best teams.” 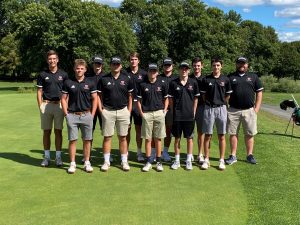 McCormick and fellow senior captains Anthony Schabowski and Joey Calderella will continue to be looked upon to lead the team this season.
“Expectations are pretty high,” Westfield High School golf coach Chris Strycharz said. “We have a lot of kids back. A lot of kids played over the summer. Everything so far has been pretty good. We expect really good things from everybody this year.”
Westfield will next take travel to Oak Ridge Country Club Sept. 13 to take on league foe, Agawam, before returning home the following day (Sept. 14) for an independent match against Southwick at Tekoa.

GIRLS SOCCER
Cards deal injury-riddled Saints loss
Pope Francis 7, St. Mary’s 1
Pope Francis raced out to a 4-0 first half lead and never looked back. Isabella Meadows recorded a hat trick for the Cardinals.
Allie Goodreau scored the lone St. Mary’s goal. Her sister, Emma, assisted. Saints’ goalies Maddison Therrien (5 saves) and Lillian Nadler (10) combined for 15 saves.
It was a tough outing for St. Mary’s in more ways than one. Already missing all-Western Mass sweeper Emma Bialas (preseason knee injury) and all-Western Mass first team goalie Amelia Willenborg (pre-game wrist injury), the Saints suffered injuries to five more starters.
“Just a tough way to open,” St. Mary’s coach Patrick Olearcek said. “We knew Emma Bialas was out and understood we needed to reshuffle on our defense but losing Amelia literally two minutes before the game started was very tough. She is without a doubt an elite goalie who makes us so much better when she is in there. …Maddison Therrien and Lillian Nadler faced so many shots in net replacing Amelia and really worked hard in their first ever appearances. I can’t say enough about their efforts.
“Pope Francis passed the ball and worked it up and down very well,” Olearcek added. “We need to get more to where they are right now.”

Hornets buzz past Tigers
McCann Tech 5, Westfield Technical Academy 0
Lindsey Deland made eight saves in goal for Westfield Tech. “The score definitely isn’t going to be a reflection of how our season is going to play out,” Tigers coach Lyle Washington said. “We’ll regroup.”
Westfield will look to bounce back against Putnam Thursday in Springfield. The game will begin at 4 p.m.

FIELD HOCKEY
Smith shuts outs Southwick
Smith Academy 5, Southwick 0
Both teams were seeking their first win since 2019 after having not played in the “Fall 1” or “Fall 2” seasons due to the coronavirus. Smith Academy received the victory with balanced scoring across all four quarters. Southwick managed to take some shots and earned four penalty corners but could not convert.
Charlotte Hennings and Makena Valentine scored two goals apiece. Cat Kokoski and Makena Valentine each had one.
Southwick goalie Ezri Johnston finished with seven saves.