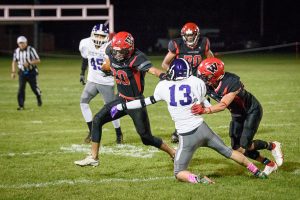 WESTFIELD – So far this season, it’s Bombs away for every opponent of the Westfield High School football team.
Westfield High School senior quarter Matt Adamites racked up four touchdowns (2 passing, 2 rushing) and the Bombers cruised to its third straight win to begin the 2021 season with a 54-7 rout of Holyoke Friday night at Bullens Field.
Westfield senior wide receiver/defensive back Matt Collins had a touchdown reception, and made two interceptions, one of which he returned for a TD.
“Everyone is making plays,” Adamites said, following the team’s postgame celebration. And he could not have been more right.
Westfield’s offense needed just two plays to light up the scoreboard. Bombers senior running back Ryan Cimini took his second handoff and rumbled seven yards for the team’s first score.
On their next series, Westfield drove 65 yards in eight plays. The drive culminated with a 21-yard touchdown pass from Adamites to Collins. The score came with 3:48 left in the first quarter and resulted in a 13-0 lead.
Westfield’s defense remained steadfast throughout the first quarter, limiting Holyoke to negative total yardage on offense until the final play of the quarter when the Purple Knights completed a nine-yard pass.
The second quarter featured much of the same.
Holyoke put together a short drive and moved the ball to the Westfield 35-yard line. With the Purple Knights knocking on the red zone, the Bombers defense stiffened and Cimini made a jarring hit on the intended receiver to break up the fourth down pass.
Westfield took over on their own 35-yard line and needed just six plays to make it a 20-0 advantage when Adamites hit senior wideout Andrew Scott for a 43-yard TD pass.
Holyoke attempted to get something going on their next drive but Collins stepped in front of a Quinn Cauley pass, intercepting the ball and returning it 33 yards for a touchdown. 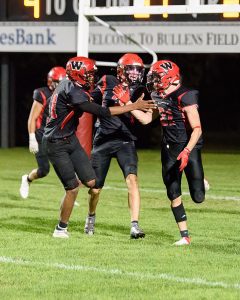 “They were trying to throw in the flats early on so once I started noticing that, I played up and got a pick-six,” Collins said. “They were just trying to abuse where we weren’t, but we got there. …I just broke on the ball, I saw him have a bad break and got an easy pick and returned it.”
Westfield padded its lead in the final minute of the half with a 10-play scoring drive that Adamites capped off with a 3-yard keeper. After the Ian Dixon extra point kick, the Bombers led 34-0 with 58 ticks left.
Then, on the ensuing kickoff, Westfield allowed its first points of the season when Holyoke’s speedy senior wide receiver/kick returner returned the ball 80 yards for a touchdown to give the Purple Knights a glimmer of hope heading into the second half.
Westfield opened the second half with a long, time-consuming drive that ended with a spectacular interception by Holyoke on its own 2-yard line. The Purple Knights offense sputtered again and they were forced to punt.
Westfield took over deep in Holyoke territory but turned the ball over again, fumbling the ball away. Still, the Purple Knights failed to capitalize.
Westfield’s next drive netted 63 yards and ended in another 3-yard scamper by Adamites. And if that was not enough, Collins secured his second interception of the game.
Even the reserve players could not be stopped for Westfield. Bombers freshman running back Lucas Guay ripped off three long runs for 113 yards in the fourth quarter, including a 57-yard touchdown run. Senior Josiah Alvalle closed out the scoring with a 9-yard rushing TD in the waning seconds.
“This year we have a way better atmosphere,” Collins said. “The locker room is full of a lot more energy.”
Through three games now, Westfield has outscored the competition by an astounding total of 133-7. The Bombers are flourishing in nearly every phase of the game.
“Every week so far we’ve gotten better – – that’s a huge step,” Westfield High School head football coach Rob Parent said. “As long as we know and we believe we can progress, move on, that’s the right mentality to have.”
That approach is essential, especially considering a road contest at Central (Oct. 8) and a home game against Minnechaug (Oct. 15) looms in the next two weeks.
“It doesn’t get any easier from here,” Collins said. “We need to have a really good week of practice, and for the rest of the season, honestly.”
The Bombers head coach agreed.
“The next four games are a grind,” coach Parent said. “The mindset for Central is you have to win every rep. You can’t think the next play or three plays ahead or four plays ahead. You have to be in the moment. You have win the rep; you have to win your battle. You have to minimize the mistakes; you have to minimize the big plays. They can score from anywhere on the field with like 17 different players so they’re going to be super explosive.
“We have to play smart, heady football,” Parent added. “Keep the ball in front of us, keep the runner in front of us, stay committed to the game plan. The chips might fall, but you have to bounce back and you have to respond from the other side.”

BOYS SOCCER
Tigers hold off Braves
Westfield Technical Academy 3, Taconic 2
David Bulatov, Manny Litvac, and Jon Vella each scored a goal for Westfield Tech and Tigers goalie logged nine saves to earn a shutout.
Westfield Tech took a nice 2-0 lead and then Taconic’s keeper saved a penalty kick. The Braves cut the lead in half but the Tigers responded with another goal.
“It got physical and intense …but it made for an exciting finish,” Westfield Technical Academy boys soccer coach Kyle Dulude said, referring to cards given to Taconic late in the game. “Our guys kept their composure. That was the key for us today.”

Red Raiders silence Rams
Hampshire 5, Southwick 0
Hampshire held Southwick without a goal. The Rams will attempt to bounce back when they travel to Springfield to take on the Central Golden Eagles Tuesday at 4 p.m.

FIELD HOCKEY
Tigers rally to tie Bombers
Westfield 2, South Hadley 2
South Hadley rallied with a second half goal to tie Westfield. Gabby Moroney had one goal and assists for the Tigers. Bella Alcaraz had the team’s other goal.
Jess Isler scored both goals for Westfield. Karlie Harlin and Rowan McDonald each had one assist.
Westfield goalie Lindsey Brown made eight saves.