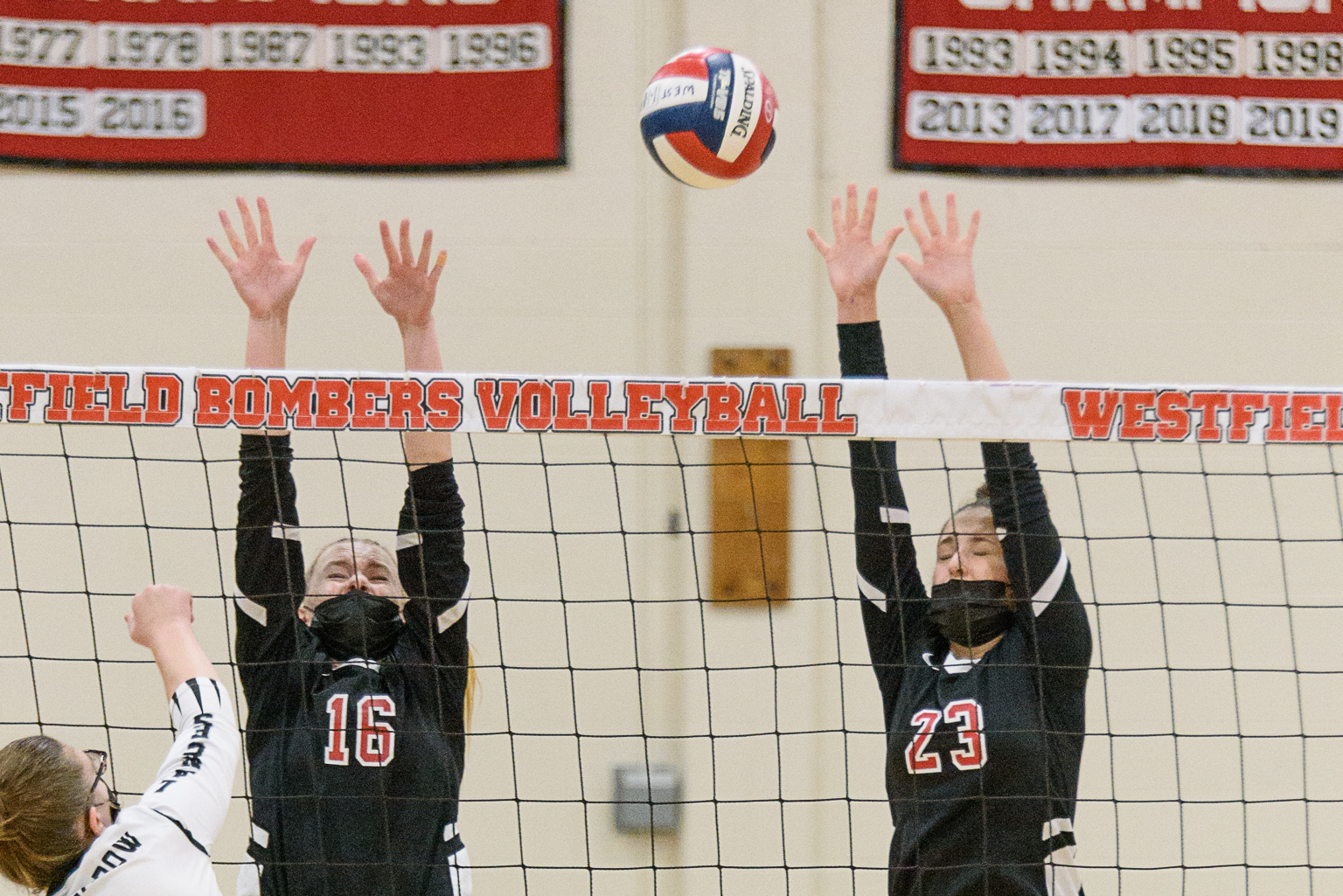 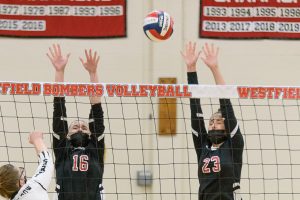 WESTFIELD – The high school girls volleyball season may just be a day old for Westfield but the Bombers appear to be in midseason form.
Westfield stormed past Longmeadow 3-0 in a high school girls volleyball opener Wednesday night, defeating the Lancers 25-11, 25-10, 32-30.
Westfield’s Livia Ciubotaru and Emma Petzold landed 12 kills apiece. Abbie Menzel collected 27 assists for the Bombers and Kaitlin Price had 18 digs.
“We really had to work a lot in the preseason this year,” Petzold, a senior, explained. “We had a lot longer preseason and we had more opportunities to play. That really helped us pull it together as a team.”
Westfield High School girls volleyball head coach Tyler Wingate said his team was itching to play.
“(They felt) really grateful to get that opportunity to play last year,” coach Wingate said. “It was condensed for sure. The girls just left really hungry for offseason volleyball. …This was a long time coming.”
Westfield opened the match with two dominating sets. The Bombers obliterated Longmeadow with an impressive all-around effort – – solid serves, crisp sets, strong net play, and good defensive awareness on the court, all while limiting mistakes to a minimum. The Lancers biggest run through the first two sets was 3-0.
“We played nice and composed; we served well,” coach Wingate said. “We waited for them to give us some mistakes and then we capitalized where we needed to.”
The third frame was one of the most electrifying sets in recent memory, especially for an early season contest. It had a playoff feel as Westfield rallied from a 22-15 deficit with the roar of the home crowd building with every key play. The emotion was off-the-charts.
It was an inauspicious start for Westfield in the final set. Longmeadow put together a stunning 5-1 start and led by as many as seven points, 22-15, before the Bombers turned things around.
“We really had to buckle down and really work through it together, trust each other,” Petzold said.
Westfield worked its way back, but still had to stave off a set point from Longmeadow three times. Both teams exchanged points for several exhilarating minutes of volleyball action. The game was tied at 25, 26, 27, 28, 29, and 30 before junior Lauren Carnes landed a kill and then an ace to secure the victory.
“I knew I just had to get the serve in and I knew a trick would pull an ace,” Carnes said.
Coach Wingate expressed his satisfaction with the effort from his team in the opener, including the late game heroics.
“This was a nice start,” he said. “I think we knew if we could keep it within striking distance, our serve would get us there. We did some things to almost give it away but it says a lot about the group to get this opening night victory.”

BOYS SOCCER
Tigers team up to shut down PVC
Westfield Technical Academy 8, Pioneer Valley Christian 0
Westfield Tech stunned Pioneer Valley Christian with seven first half goals. Seven different players scored for the Tigers.
Zach Zelazko, Owen Carpenter, and Logan Gendron scored their first career goals. Adam Strycharz, Jon Vella, Emanoil Litvac, and David Bulatov tallied their first goals of the season. Sean Johnson delivered two assists in his debut.
“We have a big squad with a lot of freshmen,” Westfield Technical Academy coach Kyle Dulude said. “We have great leaders in Alec Smith and Jon Vella. There is a great sense of belonging and pride, exactly what the program needed.”
The Tigers coach said the last year helped shape this season’s group of ball players.
“I believe Covid pushed our program to very low numbers last year and with the emergence of a huge freshman class, we have bounced back from that feeling of defeat from Covid,” Dulude said. “We feel a lot of normalcy and appreciation to all come back together again. We have a great group of guys this season.”