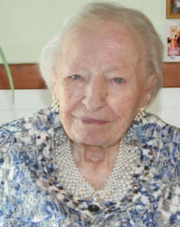 WESTFIELD – Our most cherished Aunt, Natalia Masaitis, 105, (1916-2021), peacefully passed away on September 8, 2021. The daughter of Anthony K. and Kazimiera Masaitis, Natalia was born in Westfield in 1916. The beloved family members who passed before her include an infant brother, Anthony (1919), her father, Anthony K. (1973), her mother Kazimiera, (1983) and two other brothers, Benedict (1991) and Elgy (2005). She is survived by one niece, Linda in Virginia, two nephews, Tom in Florida and Bob in California and many grandnieces, grandnephews, great grandnieces and great grandnephews.

Natalia graduated from Westfield High School in 1932. In 1942 she enlisted in the United States Navy. After completing “Yeoman” training she was assigned to a Navy Chaplain’s office in San Francisco for two years. Subsequently she was transferred to the Hawaiian Islands for two years. At the end of WWII, she left the US Navy and attended Boston University where she graduated with honors, earning a Bachelor’s Degree in Business Education. During the Korean War, Natalia re-enlisted in the US Navy and was eventually transferred to the Pentagon in Washington, DC. She was assigned as the personal secretary for the Chief of Naval Operations, who at the time was Admiral Arleigh Burke. After her second discharge from the Navy, she attended Columbia University in New York City and earned a Master’s Degree in Education. She remained active with the US Navy Reserve until her retirement as a Chief Petty Officer in 1976. Natalia was later hired by the US government’s Overseas Training Office as a teacher to military dependent children at various military bases around the world. This work was her passion and allowed her to teach and travel extensively throughout the Far East, Middle East, Europe and Africa. These were the opportunities she cherished most in her life. Once she returned to Westfield to retire, Natalia was able to fulfill her utmost passion of planting and growing the most beautiful flower gardens at her house. Natalia was truly a thoughtful and giving person to everyone she met.

Services will be private. www.firtionadams.com