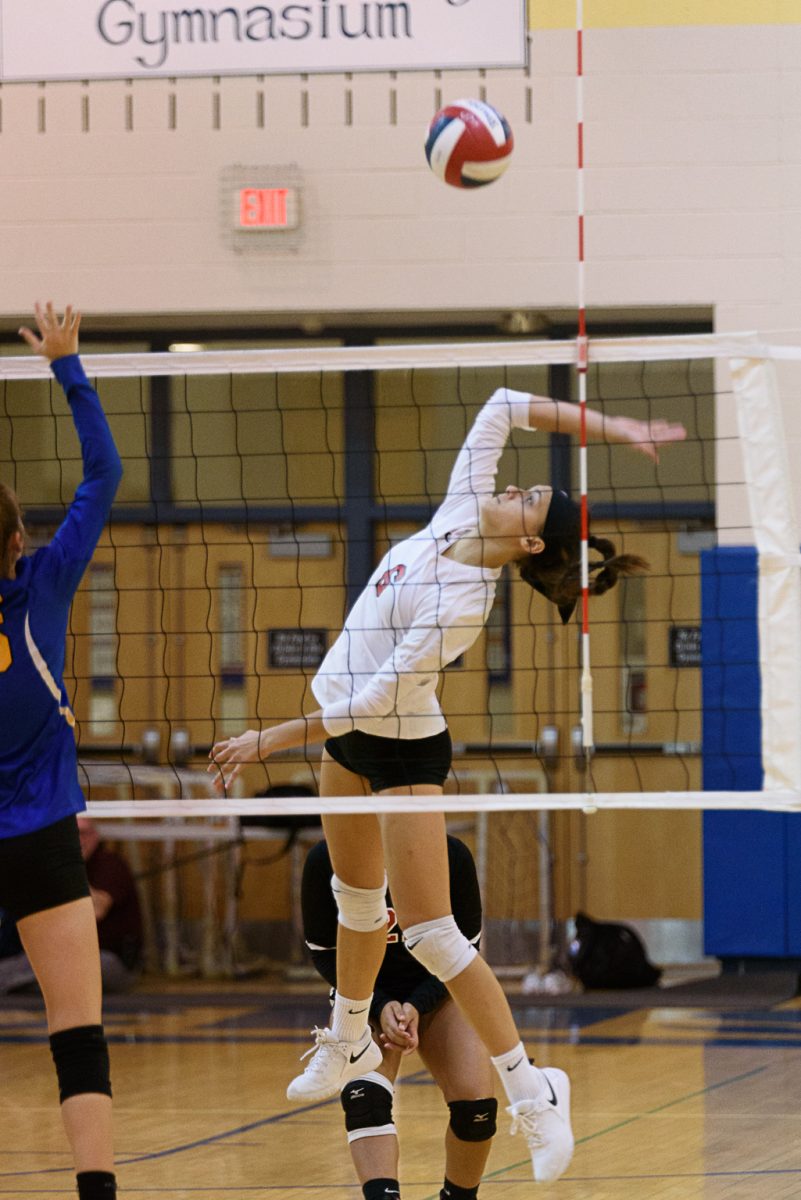 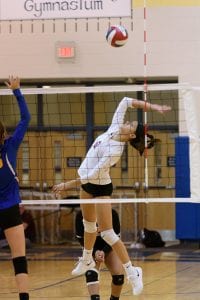 CHICOPEE – Potholes and speed bumps often slow travelers to a crawl, but not even a potential road block in Chicopee could get in the way of the Westfield High School girls volleyball team.
Westfield dotted its road map to the postseason with a victory, sweeping past Chicopee Comp 3-0 Wednesday night. The Bombers won 25-16, 25-15, 25-17 to improve to 8-2 overall, 6-0 Western League.
Westfield can now secure a second consecutive Western League title with a win Friday night at West Springfield. The game begins at 6:30.
“We have to keep working and pushing to get better,” Westfield girls soccer head coach Tyler Wingate said.
Westfield appeared determined to do just that against Chicopee Comp, rolling past the Colts by nine points in the opening set. As good as they were though, the Bombers were even better in the middle frame.
After briefly falling behind Chicopee Comp 3-2 in the second set, Westfield rallied for five straight points behind some solid serves from senior setter Brigid Moriarty (25 assists). A kill from senior Emily Gelinas gave the Bombers a 7-3 lead.
A service error halted the run, but junior outside hitter Viktoria Pavlyuk (13 kills) unleashed a devastating kill to regain control. Chicopee Comp soon countered with a 4-0 run to pull within a point, 9-8. Westfield responded with a 6-0 run that included a thunderous kill by junior outside hitter Irelis Rodriguez (6 kills, 12 digs).
Chicopee Comp did all it could to try and slow the Westfield attack, but even timeouts only delayed the inevitable. Pavlyuk issued a pair of kills down the stretch, and Westfield cruised to a 10-point win.
Chicopee Comp exhibited a more spirited effort early in the third set. The Colts built a 6-2 advantage. With junior Grace Regan serving though, Westfield put together an 8-0 run to go up 15-9. A 4-0 run made it 19-10. Rodriguez delivered a kill that rang the score up to 20-11. Senior defensive specialist Yanaira Henry (2 aces, 9 digs) landed an ace, smacking the ball into the upper lip of the netting, the ball trickling over the net and landing on the court to make it 22-12. A kill from Pavlyuk gave Westfield a 23-13 advantage. Yet another one from Pavlyuk ended it.
“If we see a block open, we just swing as hard as we can,” Pavlyuk said. “We worked together really well.”
Said coach Wingate: “That’s the game that we play. When things are going well, we have some nice weapons up front. …We want to be in contention with the Minnechaugs, Longmeadows, and Amhersts of the world. We’re going to see all three of them again. I think this group is just really handling what’s coming next.”

FIELD HOCKEY
Southwick 4, Franklin Tech 1
Emily Martin had a hand in all three Southwick scores, recording a hat trick (3 goals) and one assist. Rams’ Alex Grimaldi had one goal and one assist, and Avey Glynn collected an assist.
Southwick goalie Clare Stratton finished with three saves.

GIRLS SOCCER
St. Mary’s 6, Hampden Charter School of Science 1
Allie Goodreau scored three goals and had two assists, Emma Goodreau had two goals and two assists, and the St. Mary’s Saints cruised to a convincing win.
Chloe Lussier finished with a goal and an assist, and Eli Umana Kimura also assisted.
St. Mary’s goalie Amelia Willenborg was strong in net, corralling eight saves.
“Before the game I spoke about getting off to a fast start and the girls really responded,” said St. Mary’s girls soccer head coach Patrick Olearcek, whose Saints tallied five goals in the first 25 minutes.
It was a marked improvement for St. Mary’s the second time facing HCSS. The first meeting between the two teams this season resulted in a tie.
“This result was a real positive sign of the growth our team has had over the past 10 games,” coach Olearcek said.
The tournament-bound St. Mary’s Saints remained unbeaten, improving to 8-0-2.