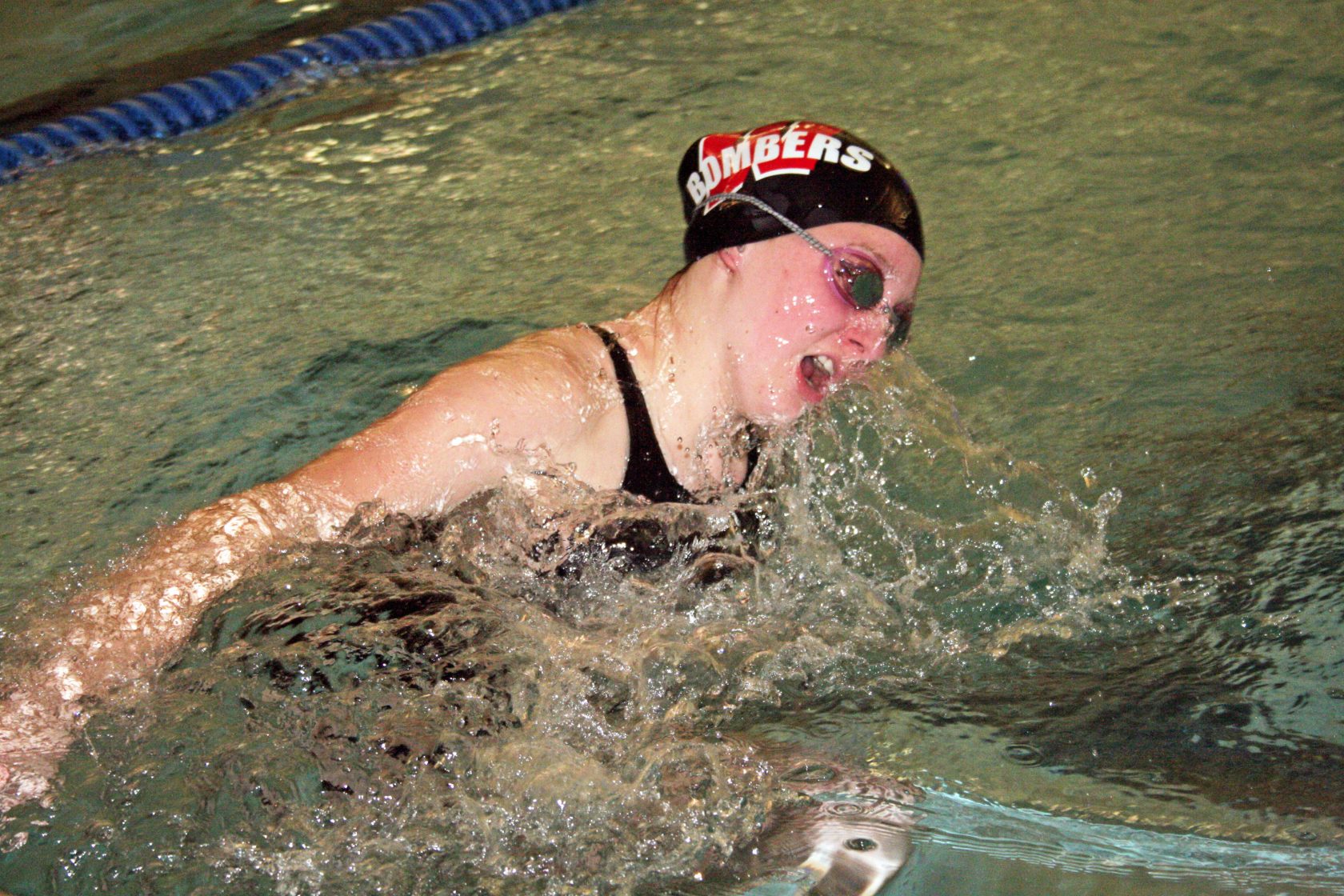 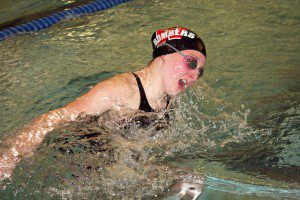 MONSON – The Westfield High School girls’ swimming and diving team continued on its winning rampage, crushing Monson on the road Friday, 142-37.
Unbeaten Westfield (3-0) outscored its opponent in every event and finished first in every event, save for the 50 freestyle.
Westfield best demonstrated the depth of its team’s talent in the three relay events. 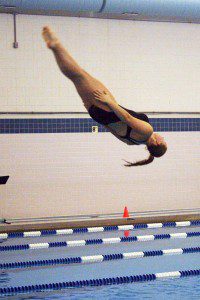 Westfield’s Maura Berry performs a back somersault in the diving portion of Friday’s competition against host Monson. (Photo by Terry Longley) 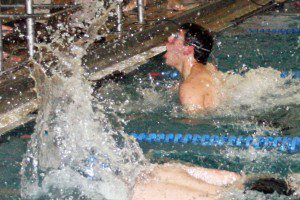 BOYS’ RESULTS
This thriller, or heartbreaker, depending on your side of the pool was decided on the final two events.
Both teams enjoyed leads throughout Friday’s meet pitting two very evenly matched teams. In the end, the Bombers came up just three points short, losing 90-87 to the Mustangs.
While Monson proved to be the deeper team with more swimmers, Westfield scored several points with important second, third, and fourth place finishes individual events. The Bombers also placed first in several events.
Nick Rosso (2:12.87) won the 200 IM. Slav Pahshuk (25.13) won the 50 freestyle, and teammate Austin Kearney stunned the crowd with a standout performance to garner second.
Ross (56.23) and Gabe Centeno put the “one-two” on Monson in the 100 butterfly, winning the event 10-3. Sam Cloutier, Westfield’s lone swimmer in the grueling 500 freestyle, outswam three Monson swimmers to win with an impressive time of 6:00.21.
With a leaner squad of just 10 boys, the Bombers were still able to win two of the three relay races – Pashuk, Kearney, Centeno, and Rosso (1:42.73) in the 200 freestyle relay and Cloutier, Chris Tu, Centeno, and Rosso (4:04.16) in the 400 freestyle relay.
It was Westfield’s first loss of the season. The Bombers’ boys’ team fell to 2-1.

GIRLS’ ICE HOCKEY
Panthers freeze out Oakmont
Cathedral (WHS Co-Op) 7, Oakmont 1
The Cathedral girls hockey team had to come up with big third-period efforts to earn its first two wins of the season. Saturday against Oakmont, the Panthers put the game away early.
Cathedral took a 5-1 lead after the first period of play and cruised to a 7-1 victory as freshman Brenna Hoar notched a hat trick and added an assist to give her a team-leading seven points for the season.
Sophomore Madison Pelletier added two goals in the game, giving her six on the season. Kelly Shea and Mackenzie Pelletier each added two assists, and junior goalkeeper Lexi Levere stopped 11 of the 12 shots she faced.