WESTFIELD – Sydnie Brock scored the game’s only goal in the 75th minute to lift Westfield Tech over St. Mary 1-0 Saturday as part of “Westfield Soccer Day” at Westfield State University.
“The score doesn’t reflect how my girls played today,” Westfield Tech coach Lyle Washington said. “We maintained control for most of the game. …We just had a tough time penetrating their defense and finishing.”
The game was held as part of a four-game slate, showcasing the Whip City’s boys’ and girls’ soccer teams. Donations were also collected to help those affected by Hurricane Harvey.
Westfield Tech goalie Lilya Stepanchuk needed to turn away just two shots in earning a shutout. St. Mary goalie Jessica Crosby finished with eight saves. 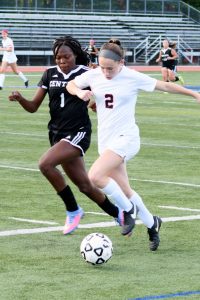 “I can’t say enough about how my defense played today,” coach Washington said. “St. Mary’s has a few really good forwards – one that’s really making a name for herself at a young age – so to control the ball the way we did against their team is very promising.”
St. Mary coach Patrick Olearcek was pleased with his team’s effort.
“It was a true nail-biter. Jess Crosby (8 saves) was fantastic in goal,” he said. “Caitlyn Olearcek, Lexi Shedd, Erin Olearcek, Paighton Ramos, and Caroline Leahy were all stellar in their play.

BOYS’ SOCCER
Tigers shut out Saints
Westfield Technical Academy 6, St. Mary 0
Six different players scored, and Westfield Tech shut out St. Mary Saturday at Westfield State University.
Phillip Lisyanyy, Dan Kontsimal, Kirill Okhrimenko, Brad Marion, Bodhi Hall, and Ruvim Suprunchuk each tallied a goal.
“We started a little sluggish, but eventually sped up play,” Westfield Tech coach Kyle Dulude said. “We were also able to get in over 20 players on our full roster which was nice.”
For many players, it was their first varsity minutes.

Pitt silences WHS
Pittsfield 2, Westfield 0
Pittsfield scored one goal in each half of Saturday’s game to defeat Westfield Saturday in the final game of the quadruple header at Westfield State University.
Mike Lurgio collected four saves for the Bombers.
“It was a disappointing game tonight because we just made a couple of mental mistakes on the two goals we gave up which is frustrating,” Westfield coach Andrew Joseph said. “I thought we played pretty well, especially in the second half.”