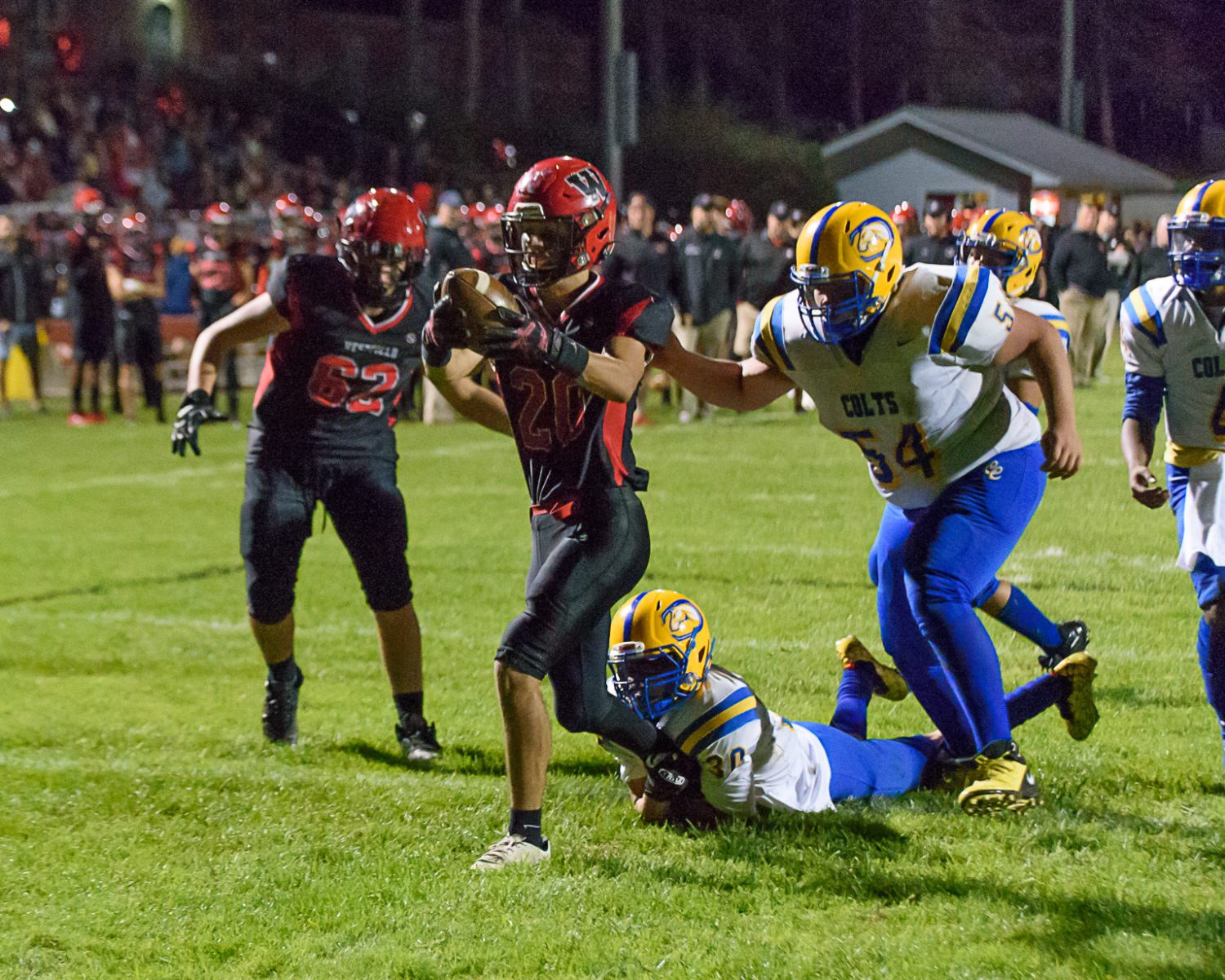 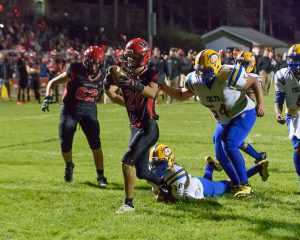 WESTFIELD – Six up, five down.
For the fifth time in six tries, the Westfield High School football team wound up on the winning side of things this fall season. The Bombers trounced the winless Chicopee Comprehensive Colts, 63-7, on “Senior Night” Friday at Bullens Field.
Westfield improved to 5-1 with just one regular season contest remaining, an Oct. 29 matchup at Longmeadow. The Bombers have now beaten every Western Massachusetts team they have faced not named Central.
“We’re playing really good football but we’re far from perfect,” Westfield High School football head coach Rob Parent said.
Although Westfield was not perfect – – the Bombers committed one turnover and more than a half-dozen penalties – – they sure did look the part of a serious contender.
Senior running back Ryan Cimini had a monster effort, rushing for 244 yards and four touchdowns on 23 carries. Senior Andrew Scott had two 72-yard kickoff returns for touchdown. Freshman quarterback Jaxson St. Pierre once again appeared poised in the pocket. And the defense locked down the opposition for the umpteenth time. 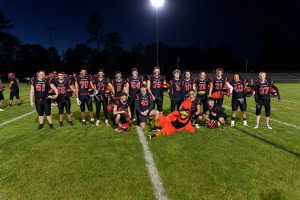 “My boys up front did great tonight,” Cimini said, referring to the Westfield offensive line. “They pushed them forward and we kept running it down their throats over and over again.”
Westfield’s defense went right to work from the opening whistle, forcing a turnover on Chicopee Comp’s first play. The Bombers took over on the Colts’ 41-yard line but also subsequently turned it over, fumbling on their third play from scrimmage.
Chicopee Comp took over on its own 2-yard line. Two plays later, the Westfield defense sacked the Colts quarterback for a safety. On the ensuing kickoff, Scott scored his first special teams touchdown. The home team led 9-0.
“It was all about my blockers,” Scott said. “I wouldn’t have able to do it without them. I just got a good hole and I was able to take it.”
Westfield finally took over on offense midway through the first quarter, and it was well worth the wait. The Bombers began on their own 32 with 6:54 on the clock. They drove 68 yards in eight plays, capping it off with a one-yard touchdown plunge from Cimini. Ian Dixon’s extra point made it 16-0.
The scoring barrage continued.
Westfield scored on each of its next two drives. Cimini scored on a five-yard rushing touchdown early in the second quarter, and Lucas Guay (6 carries, 72 yards) scored on a 1-yard TD plunge midway through the quarter.
Then, late in the half, Scott scored his second special teams touchdown. The extra point gave Westfield a 36-7 lead.
The second half featured more of the same.
Cimini capped off a 62-play drive to open the first half with a nine-yard touchdown run. Westfield forced a turnover on Comp’s next series and marched a short distance before scoring on another Cimini run, this time from four yards out.
Chicopee Comp fumbled away its next kick return. Another short field led to a Guay nine-yard rushing touchdown. Noah Delgado capped off Westfield’s scoring in the waning minutes on a 27-yard TD run.
Now, Westfield will turn its attention to its final regular season contest, a road trip to Longmeadow to face the Lancers Friday night at 7.
“Longmeadow is a really solid team,” coach Parent said. “They’re well-coached, well-disciplined. If we have too many mistakes like we did in the first half of this one, it’s going to be a much tighter ball game going into halftime than it was tonight.”
The game could also weigh heavily on whether or not Westfield receives a No. 2, 3, or 4 spot in the state playoff tournament. The Bombers entered Friday night’s game against Chicopee Comp ranked third in the state.
“If you can secure a top four spot in the power rankings, that’s a huge advantage,” coach Parent said. “Get a home playoff game, and if you happen to win that win, potentially a second home playoff game. Those things matter. In a statewide playoff format where you can travel coast-to-coast, I’d much rather not take a two-hour bus ride to go play a playoff game on a Friday night.”