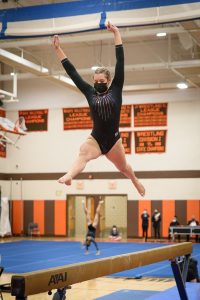 WESTFIELD – Two tri-meets into the 2021 regular season the Westfield High School gymnastics team is still standing atop Western Massachusetts unbeaten.
Westfield scored 130.7 points, defeating Agawam (122.40) and Chicopee Comp (103) late Wednesday evening at the Brownies’ home gym.
Kaela Johnson led the way for Westfield with a first-place all-around finish in the Oct. 6 meet, besting Chicopee Comp’s Elizabeth Santos (32.50) and Bombers’ Bella Goodreau (32.45) with a score of 33.95. Johnson finished first on the balance beam (8.75), tied Goodreau for first on the uneven bars (8.1), and tied Agawam’s Neve Mickiewicz for first on the floor exercise (9.0). Goodreau was second on the beam (8.45).
Westfield’s Rylee Altieri placed second on the vault (8.45) and Lizzy Galczynski won silver on the vault and beam with identical scores of 8.3.
For Westfield, it was their second straight sweep at a tri-meet. In their season opener, the Bombers (4-0) beat Minnechaug and Agawam. They will travel to Wilbraham Oct. 13 to take on the Minnechaug Falcons.

BOYS SOCCER
Tigers celebrate “Senior Night” by silencing competition
Westfield Technical Academy 4, Putnam 0
WESTFIELD – “Senior Night” was a success for Westfield Technical Academy’s boys soccer team late Wednesday evening at Jachym Field.
Senior Adam Strycharz scored. Juniors Nick Povar and David Bulatov tallied goals. Senior Tim Lezhnyak, Zach Zalazko, Manny Litvac, and Trey Hooper earned assists. Seniors Alec Smith and Steven Velazquez were solid on defense. And Westfield Technical shut out Putnam 4-0.
“We are playing extremely well right now,” Westfield Technical Academy boys soccer coach Kyle Dulude said. “Things seem to really be coming together. The guys are learning their roles and the chemistry is building.”
The state rankings agree. In a recent release, Westfield Tech was ranked 13th in the state, behind some teams that they beat this season or had a better record than.
“We just need to focus on playing the best we can,” coach Dulude said.
During an unofficial pregame ceremony, the underclassmen made presentations to the seniors. “Top notch,” Dulude said. “The brotherhood is there and these guys are living it up.”
Westfield Tech will embark on a road trip for the remainder of the season with games at McCann Tech (Oct. 8), Drury (Oct. 14), Gateway (Oct. 15), Hoosac Valley (Oct. 19), and Commerce (Oct. 20).
Said Dulude: “We will need to really come together as a team to finish the season strong and get ready for the postseason.”

Saints defeat Indians
St. Mary’s 6, Ware 1
Jonathan Baillargeon added another hat trick to his regular season tally, Brady Collins scored twice, and Ben King had one goal as St. Mary’s handled Ware Thursday.
Nathan Campbell kept St. Mary’s defense on top of the Ware attacks with Seamus O’Neill and Josh Cote containing runs. Trevor Corriveau continued to key the team’s offensive runs.
“(Trevor’s) presence and skill has kept us strong in the middle of the field,” Saints coach Andy Lussier said. “Our game play is still coming together and evolving, and we feel the timing is right as we come into the postseason. We’re still pushing hard to clean up our game as we prepare for tournament.”
Thomas Baillargeon made 12 saves in net for St. Mary’s.

GIRLS SOCCER
Saints down Pioneers
St. Mary’s 5, Pathfinder 1
Allie Goodreau netted a hat trick, Emma Goodreau had a goal and an assist, and Eliana Umana Kimura chipped in with a goal as St. Mary’s chased Pathfinder Thursday. Anna Puttick and Macy Woodger each had an assist.
Amelia Willenborg made 10 saves for St. Mary’s.
“While we were not as crisp or aggressive as we normally are, we still came away with a solid win,” St. Mary’s girls soccer coach Patrick Olearcek said. “Each game is not going to be a masterpiece but good teams find ways to win and we did that today.”