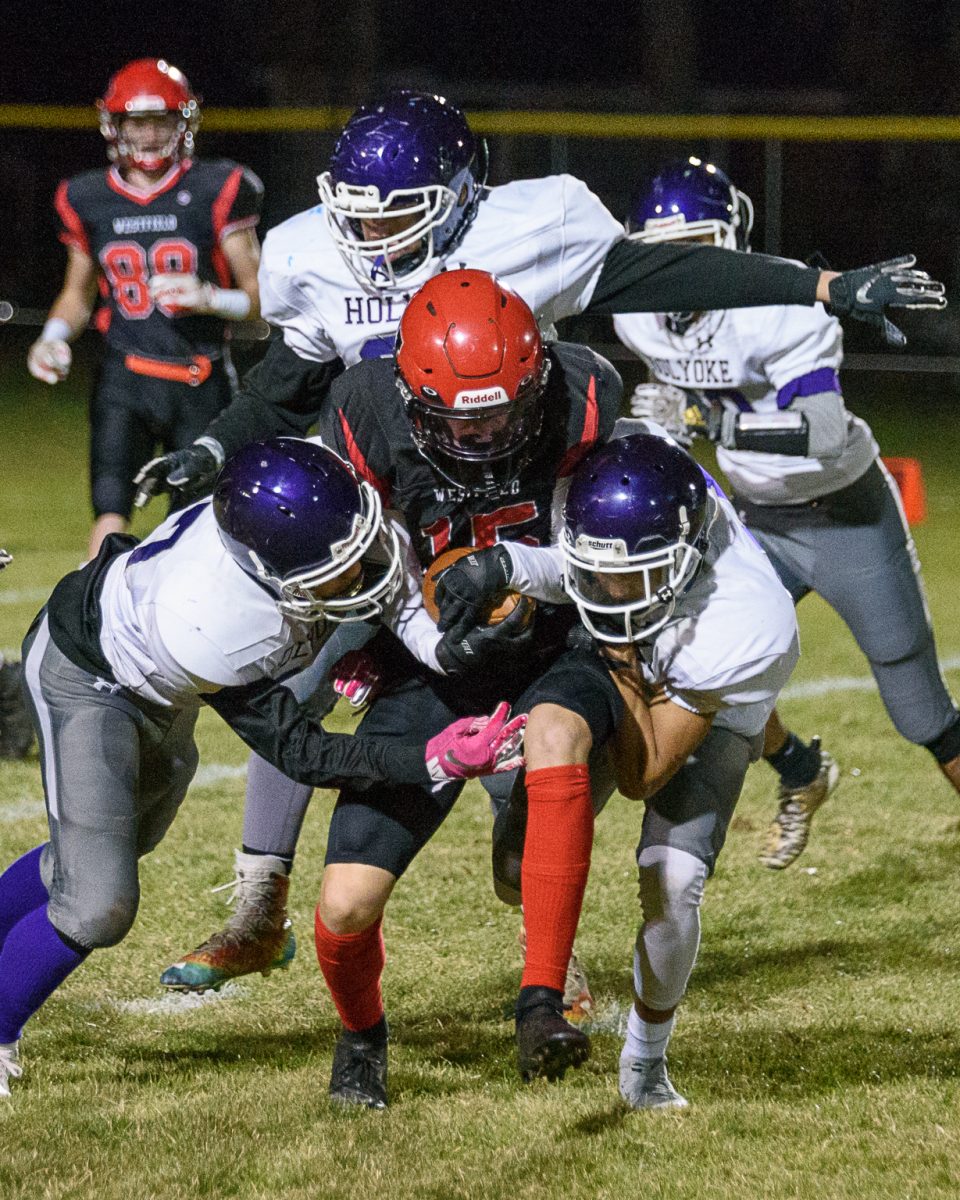 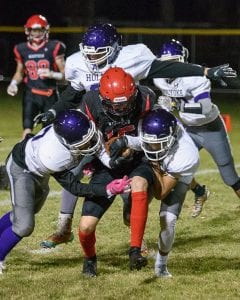 WESTFIELD – The Westfield and Holyoke high school football team did not combine for 18 touchdowns like they did when the two teams met for a 69-54 Bombers victory in Week 8. The eye-popping nightmare for statisticians was a bit more subdued in the second go round.
In the end though, the results were still much to the liking for the Whip City as Westfield turned back Holyoke 26-8 Friday night at Bullens Field.
Westfield (6-4) quickly put to rest a bad taste still resonating from the prior week’s 28-0 shutout at the hands of Minnechaug in a West Division 2 semifinal. The Bombers drew first blood, scoring on a two-yard touchdown run from senior running back Nick Clauson with 7:03 remaining in the first quarter.
Holyoke bounced back in the second quarter, scoring on a 22-yard pass from senior quarterback Gabriel Fernandez to sophomore wide receiver Jael Cabrera. The same two Purple Knights connected again on the ensuing two-point conversion to make it 8-7.
Westfield countered with another successful drive. The Bombers regained the lead when Clauson plunged into the end zone from a yard out with 5:35 left in the half to take a 14-8 advantage.
Westfield kept churning upfield in the second half.
On their very first drive of the third quarter, Westfield scored. The key play came on a 65-yard Matt Adamites pass to Andrew Scott. The Bombers capped it off with a 3-yard touchdown from sophomore running back Ryan Cimini, and led 20-8 less than two minutes into the half.
Holyoke turned over the ball, fumbling on its first possession of the second half.
Westfield wasted little time in scoring, converting the turnover into points when Adamites connected with sophomore Michael Collins on a 28-yard touchdown pass. With 7:52 left in the third quarter, the Bombers led 26-8.
Holyoke turned over the ball again on its next drive when Westfield sophomore Matthew Collins intercepted the ball. The Bombers could not get anything going though.
Holyoke took possession, but stalled out on Westfield’s 28-yard line. The Bombers ate up some nine minutes with their next drive before attempting a 32-yard field goal that went just wide.
Holyoke took over, but time soon ran out.
Westfield will now finally turn its attention to a Thanksgiving Day rematch with Minnechaug. The Falcons will first face the Central Golden Eagles in the D2 championship game before the 3rd annual holiday bowl in Wilbraham. Game time for Westfield-Minnechaug is 10 a.m.