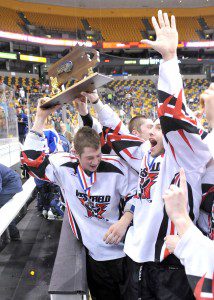 BOSTON – There have been several dynasties celebrated over the years at The Garden from the Boston Celtics to the Boston Bruins to the … Whip City?!?
The Garden has been the Westfield High School hockey team’s home away from home over the last decade or so, representing the state several times and claiming multiple championships in Division III.
Westfield brought home its third state championship in 11 years and first since 2008, defeating Swampscott 4-1 in the state finals Sunday afternoon at the home of Bruins.
“We wanted to go out with a bang,” said Westfield coach C.B. “Moose” Matthews said. “I’ve had a lot of fun. This was a great group of kids.
The Bombers’ dynamic duo of senior forwards Adam Collier and Sean Spohr had a hand in three of their team’s four goals. The sights and sounds of Boston failed to prove to be a distraction for them.
“Sophomore year, we were more focused on being at the Garden this year,” Collier said. “This year we wanted to win it.”
After killing off 3 penalty minutes early, Westfield pounced on top of Swampscott with two first-period goals.
Connor Sullivan took a crossing pass from Chris Sullivan 10 minutes, 44 seconds into the opening period and struck for the game’s first goal. Then, with 40.2 seconds remaining in the period, Spohr delivered a searing pass into the crease to Collier, who shoveled it in for a 2-0 lead.
Despite facing a two-goal deficit, the Big Blue fans responded with chants of “It’s not over” and “I believe that we will win.” But Swampscott was quickly left singing the blues.
In the middle frame, Westfield tallied a third goal when Collier scored off a Spohr rebound with 2:48 left. Brandon Miemiec set up the play.
Swampscott finally scored in the third period when Robert Serino picked up a loose puck behind the net, beating the Westfield defensemen, and squeezing a beautiful wrap-around shot past Bombers’ senior goalie Nick Liberto with 8:55 remaining.
But the celebration for the Big Blue was short-lived as time expired, and Anthony Cagliostro tacked on a goal in the final minute with assists from Spohr and Collier.
Senior goalie Nick Liberto turned away several shots, allowing Westfield to gain the early lead.
“I just wanted to stay focused to give my team the first goal,” Liberto said. “That was huge.”
The Bombers veteran goaltender and his defensive supporters never let down their guard.
“We learned from Wachusett that a full 45 minutes was expected of us,” Liberto said.
In the state semifinals, Westfield skated out to a 5-0 lead but yielded four of the game’s last four goals and escaped with a 6-4 victory to advance to Sunday’s championship. That late near-collapse would not play itself out again.
“(Liberto) brought us here. It could have went either way very quick,” coach Matthews said. “Our goaltender stood on his head.”
The celebration is not over yet though.
A rally for the 2012-13 Division 3 state champion Westfield Bombers hockey team will be held Wednesday night at Amelia Park Ice Arena, beginning at 8 p.m.
Notes: According to published reports, Swampscott was missing two players after they were found to have violated the school’s alcohol policy at a high school dance on Friday night, and were subsequently suspended from the game.