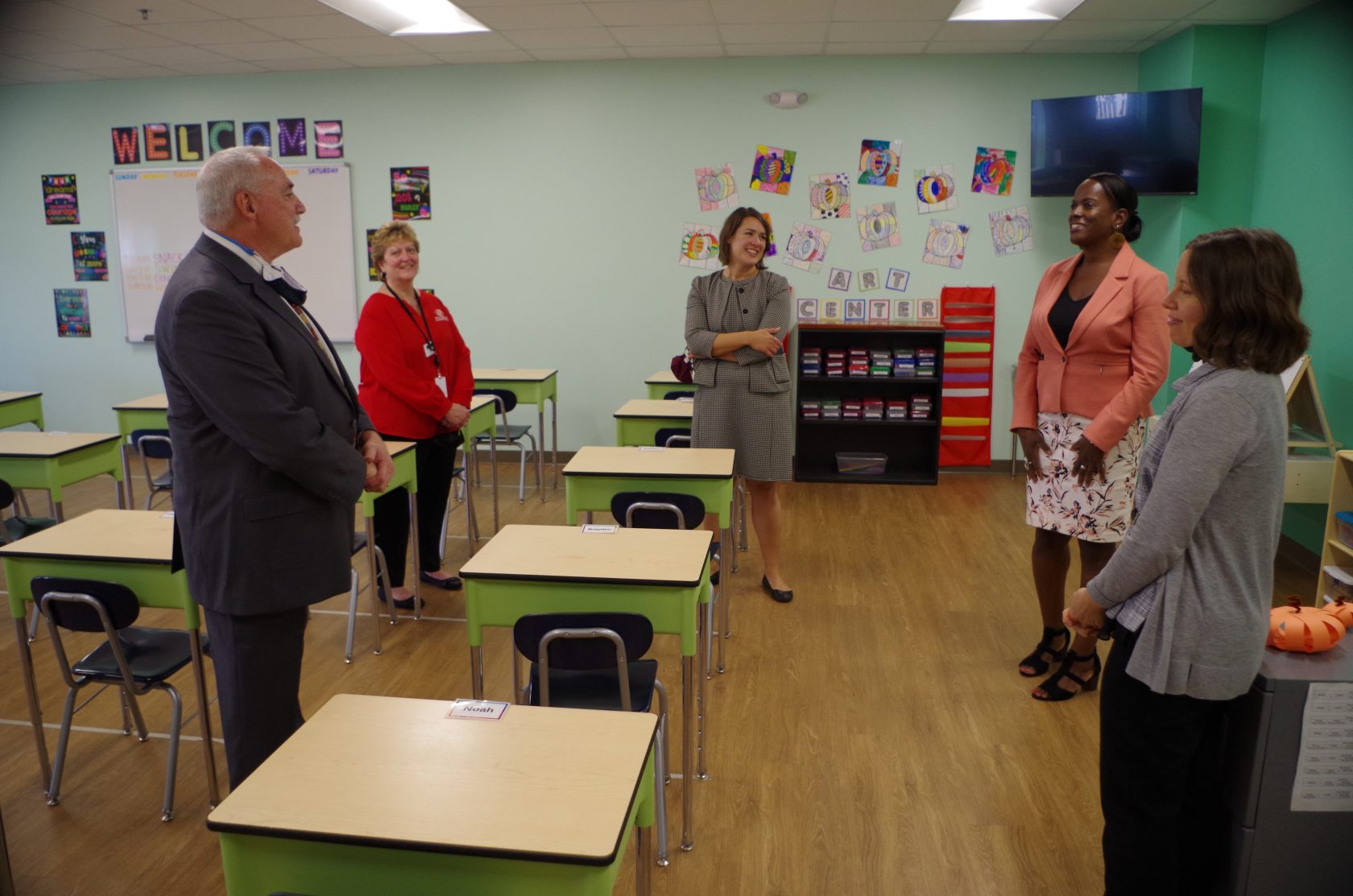 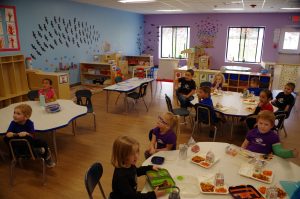 Preschoolers enjoy lunch in a classroom of the new William R. Parks Early Education Center at the Boys & Girls Club of Greater Westfield, after helping dedicate the building at a Wednesday ceremony. (MICHAEL BALLWAY/THE WESTFIELD NEWS)

WESTFIELD — For the CEO who has led the local Boys & Girls Club as it expanded its childcare and preschool services over the past 17 years, there was just one surprise at the dedication of the club’s $3.5 million, 15,000-square foot addition on Wednesday.

“This is something I never expected,” said Parks after the name was unveiled. “I’m totally humbled by it.”

Speakers at the Oct. 13 ceremony praised the new building, designed to serve 400 children in preschool and elementary grades, but also lauded its namesake, the chief executive of the Boys & Girls Club of Greater Westfield since 2004.

State Sen. John Velis, who has coached sports at the club, said Parks has been a tireless advocate for his organization and the children it serves. 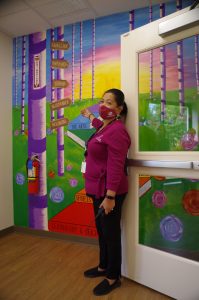 Charisse Balicki, licensed childcare director at the Boys & Girls Club, points to a mural in the new building designed by Jocelyn Carella-Erickson, the club’s visual arts director, and painted by staff. The mural shows the values of “Acceptance,” “Belonging,” “Diversity,” “Equity” and “Knowledge,” and program areas of “Leadership and Service,” “Sports and Recreation,” “Health and Wellness,” “Education” and “The Arts,” leading to a bright future. (MICHAEL BALLWAY/THE WESTFIELD NEWS)

“It’s tough to overstate what you do for the community,” Velis said. “Every community needs a Bill Parks.”

Kidz Klub and other youth programs were instrumental in filling the childcare gap during last year’s hybrid learning schedule, said Westfield School Superintendent Stefan Czaporowksi. For several months, classrooms were split in half, with students attending school every other week and learning remotely during the off-weeks. For students without a parent at home during the daytime, the Boys & Girls Club made a huge difference, he said.

Ron Hadorn, vice president of the 11-state Northeast Region of the Boys & Girls Clubs of America, said Parks’ leadership stands out when comparing the Westfield club to others during the COVID-19 pandemic. He said it’s “heroic” that the Westfield staff was able to provide so many services, and expand its building, when children needed it the most.

“For most of our clubs in the country, their activity went down to 20 percent of what they were doing” previously, he said. “Truth is, in America, there are a lot of kids who need something after school.”

The Early Education Center deserves to bear the name of the chief executive who has led the club’s expansion in the past two decades, said Mike McCabe, vice president of the club’s board of directors. 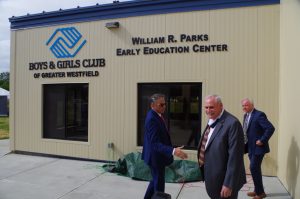 Mike McCabe, vice president of the board of directors of the Boys & Girls Club of Greater Westfield, reaches out to congratulate William Parks, the club’s CEO, after helping unveil the new name of the club’s Early Education Center. Also helping with the reveal was Jim Irwin, president of the board of directors. (MICHAEL BALLWAY/THE WESTFIELD NEWS)

McCabe described himself as a 1970s “latchkey kid” who depended upon the club in his youth and has remained close to it since then. He said a decade after the club opened its 28 W. Silver St. building in 1991, the Boys & Girls Club of Greater Westfield had fallen on tough times in the mid-2000s. Budgets were tight and programs were being cut. Parks changed all of that, McCabe said.

“Without his leadership, compassion and endless drive, we could not be where we are today,” McCabe said.

Samantha Aigner-Treworgy, the state’s commissioner of early education and care, said the expansion of affordable childcare will benefit not only the children who attend the programs, but also the parents who can pursue employment opportunities, and the greater society. 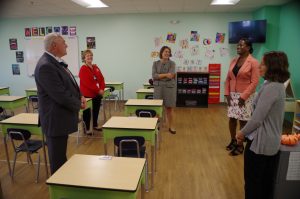 From left, William Parks, CEO, and Kellie Brown, chief operating officer, both from the Boys & Girls Club of Greater Westfield, thank the leaders of two agencies that helped fund the club’s $3.5 million expansion while chatting in the new second-grade classroom. At center is Samantha Aigner-Treworgy, the state’s commissioner of early education and care. At right are Theresa Jordan, director, and Kira Wilke, associate director of research and development, from the nonprofit Children’s Investment Fund. (MICHAEL BALLWAY/THE WESTFIELD NEWS)

“This is actually what transforms communities,” she said. “Being able to be the place where children can come to learn, to be joyful. Not only the children, but the parents, as well, and the staff.”

Her department provided $1 million of the construction costs as a state grant. She said she’s seen several childcare centers open during her term, but singled out Westfield’s for how quickly it moved from groundbreaking to finished building — less than a year.

“This is a huge feat to do in any circumstances, but to do it in the middle of COVID, wow,” she said.

The Building Futures campaign also received a large grant from the Children’s Investment Fund, a Boston-based nonprofit. Theresa Jordan, the fund’s director, said she was impressed with the club’s “high-quality spaces for young children,” both indoors and out. 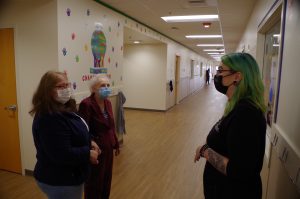 The Boys & Girls Club started Kidz Klub in 2006, Parks said, with an enrollment of just 28. By 2011, the program had grown past 100 participants and the club needed more space. The “Raise the Roof” campaign that year resulted in a 15,000-square-foot addition to the club’s existing building, moving the gymnasium to the second floor and adding classrooms below it. That allowed Kidz Klub to expand to 200, but interest continued to grow.

In the meantime, said Parks, the club had identified preschool services as one of the region’s needs, and determined that it needed a new wing “so we could expand our licensed childcare programs to serve all the children in Westfield who are in need.” 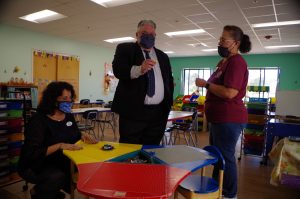 Construction began in February, Parks said, and finished one week early on Aug. 10, giving staff enough time to open the building alongside Westfield’s public schools on Aug. 30. He credited excavators J.L. Raymaaker and Sons and builders One Construction with keeping the project on time and on budget.

In addition to the preschool facilities, the new building includes one classroom each for kindergarten through grade 4, which are used for before-school and after-school Kidz Klub, and all-day programs during the summer. Moving the elementary grades out of the main Boys & Girls Club building has allowed for an expansion of technology and arts spaces there, as well as the 21st Century Program for Franklin Avenue School pupils. The Kidz Klub classrooms for grades 5-7 remain in the main building. 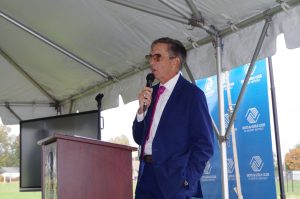 Mike McCabe, vice president of the board of directors at the Boys & Girls Club of Greater Westfield, speaks about his experiences as a youth member of the club in the 1970s during the Oct. 13 dedication of the club’s new Early Education Center. (MICHAEL BALLWAY/THE WESTFIELD NEWS) 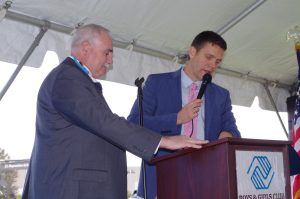 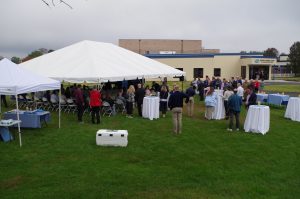 Staff and supporters of the Boys & Girls Club of Greater Westfield gather on Oct. 13 for a dedication ceremony of the $3.5 million Early Education Center, at right. The facility, which is attached to the other Boys & Girls Club building, opened Aug. 30. (MICHAEL BALLWAY/THE WESTFIELD NEWS)