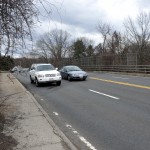 The Route 20 bridge over the CSX Railroad in West Springfield, will be demolished and replaced as  part of the CSX railroad and MassDOT expanded transportation project. Commuters along the Route 20 (Westfield Street) corridor will be effected by  a two-lane traffic choke point at the bridge during the two-year construction project . (Photo by chief photographer Frederick Gore)

WEST SPRINGFIELD – State transportation officials presented details of a bridge reconstruction project on Westfield Street that will constrict traffic to two travel lanes for nearly two years, at a public hearing last night.
The state Department of Transportation (DOT) said the bridge over the CSX railroad is being raised to accommodate “double stacking” of over-the-road containers, also known as Conex containers, which are transported by rail to rail yard, then offloaded onto trucks for local delivery.
The current bridge, located next to Charles Avenue and about a half mile from the Westfield line, has a clearance of 19 feet, 10 inches. The railroad needs a clearance of 21 feet to double stack the shipment containers.
The $6.5 million project, to be completed by the summer of 2014, will require the construction of a temporary bridge next to the existing span, which will be demolished and replaced to provide the needed clearance for CSX.  CSX plans to transport the double-stacked containers from New York, through the Berkshires and western Massachusetts, to Worcester.
The state is funding the project, one of five bridge projects associated with the double stacking initiative, through the accelerated bridge program which has been allocated a total of $18 million.
The project will increase the road surface elevation by between five and eight feet and change the configuration of the approaches to eliminate a “broken-back curve” and create a banked sweeping curve along 1,860 feet of the four lane highway.
Mayor Gregory C. Neffinger said that many of the containers will be offloaded in West Springfield, doubling the volume of truck traffic to and from the city’s rail yard.
Neffinger said the Route 20 bridge project should be linked to reconstruction of the Union Street railroad overpass bridge to increase clearance and allow trucks from the rail yard to access Memorial Avenue, reducing the volume coming through the city’s core district.
The federal government has funded $1 million for the design of the Union Street overpass reconstruction, with the actual construction projected at between $12 and $15 million, but CSX has balked at involvement in that effort, Neffinger said.
Neffinger said reconstruction of the Route 20 bridge, which was built in 1982, “will have no value to West Springfield and will be a major disruption.”
City Councilor George Kelly evoked cheering from the more than 100 residents packed into the City Council Chambers for the public hearing, when he questioned the validity of the hearing because the project, currently at the 25 percent design phase, is set to begin Monday, April 2, 2012 when preconstruction work, such as surveying and erecting construction zone warning signs, is slated to start.
“I’m very concerned that this hearing is so close to the kick-off date,” Kelley said. “I don’t know how you can take our concerns and incorporate them (into the project design). I think there is a rush to get things done. Let’s do it the right way, not the quick way.”
Kelly said that he has served as chairman of the council’s transportation committee in the past and in that role worked with CSX on a number of issues.
“We always tried to be accommodating, but that was not always reciprocated,” he said.
Kelly said the project, as presented last night, will result in traffic jams at the choke points and block access to and from side streets in an area farm beyond the construction zone.
“We need your help to get things changes,” he said. “I’d appreciate if you worked with the City Council, the mayor and citizens.”
Conservation Coordinator Mark Noonan, who served in that position, as well as the principal planner and a City Council member in Westfield, said the state does not plan to file a notice of intent with the West Springfield Conservation Commission. Noonan said that DOT officials have cited a law exempting bridge projects from local environmental board review, but said that exemption should not be applied to this project.
“The state should have to comply with the law as any private citizen would,” he said. “The Conservation Commission has not reviewed (the environmental impact) of this project.”
Residents speaking at the hearing raised a wide range of concerns, many directly related to public safety. A chief concern is the speed at which traffic moves through that area, the configuration of side-street intersections, the lack of guardrails in much of the construction area and the fact that existing guardrails are improperly placed.
Thomas J. Yarsley, a resident of Alderbrook Lane and an engineer with more than 40 years experience, also drew applause when he questioned the need for the reconstruction of the bridge, which is structurally sound.
“How much consideration has been given to lowering the railroad bed to attain that clearance?” Yarsley asked. “As an engineer, I was always taught to take the simplest solution. Lowering the bed, if feasible, is a no-brainer.”
Joseph Sipitkowski of 2287 Westfield St., a direct abuttor to the construction site and also a professional engineer, present a slide show and pointed out deficiencies in the present road configuration with a laser pointer. Two of Sipitkowski’s issues are that the current guard rail near the bridge is located on the wrong side of the sidewalk next to the roadway. He also said that the guardrail, intended to keep vehicles on the roadway, is not sufficiently long, especially in the cusp of the curve east of the bridge, which permits out-of-control vehicles to slide off the pavement.
Sipitkowski showed photographs of accidents, including one of a vehicle that struck the side of his home as he mowed his lawn, as evidence of that poor design.
“There have been multiple accidents, with injuries, throughout that whole area,” he said. “The Daytona Race Track begins at East Mountain Road in Westfield.”