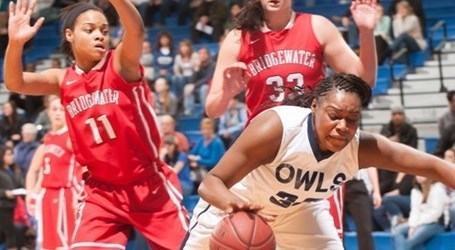 WESTFIELD – Tournament MVP Rachel Kusz hit what proved to be the game-winning three pointer with 37 seconds left in regulation to lead second seed Bridgewater State to a 60-57 upset win over top seeded Westfield State in the 2015 Massachusetts State Collegiate Athletic Conference women’s basketball title game at the Woodward Center on Saturday afternoon.
Kusz scored 16 points in the game, and hit four of six three-point tries to power the Bears win. Bridgewater improves to 16-10 on the season and earns the league’s automatic bid to the NCAA Tournament. The Bears have now calimed five straight MASCAC tournament titles, and have won six in total.
Top seeded Westfield State falls to 22-5, and had a school record 16-game win streak snapped.
Westfield jumped out to a 9-2 lead in the first few minutes of the game, but Bridgewater quickly bore into that lead, tying the game at 11 after capping a 9-0 run with a Vanesa Conceicao jumper.
Bridgewater held a 21-20 lead at the half.
Westfield endured a scare early in the second half when conference player-of-the-year Jen Ashton went down hard with an apparent injury and left the game with 17:10 of second half, with the Owls down three, 28-25. BSU converted on back to back possessions, on jumpers from Kusz and Megan Boutillette to grab a 32-25 lead that forced an Owls timeout with 15:22 left that allowed Ashton back into the game.
Westfield pulled itself back into the game, taking a 41-40 lead on a Jill Valley drive with 11:05 left in the game.
Bridgewater then had its turn with adversity, as leading scorer Boutilette fouled out with 9:52 left in the game and BSU up 45-43.
The Owls tied the game at 53-all on a Forbasaw Nkamebo layup, then a Canceiciao three pointer gave the Bears a 56-53 lead with 3:56 to play.
Westfield answered one more time on a hustle rebound from Rebecca Sapouckey, who dished to a driving Ashton for a layup and a 55-56 game with 1:15 to play. On the ensuing possession the Owls got a steal near midcourt from Nkamebo, who drove to the hoop and was fouled with 59 seconds left in the game and hit both free throws for a 57-56 Westfield lead.
Kusz then drilled the decisive three pointer from the left corner with 37 secs left to give the Bears a 59-57 lead.
After and Owls miss and missed free throw on the ensuing Bridgewater possession, Westfield had a chance to tie the game. After a timeout, the Owls got the ball to Ashton on the right wing, who drove to the hoop and made what appeared to be a game-tying layup, but the hoop was disallowed as Ashton was called for a charge with seven seconds left in regulation.
Chesea Saucier hit one of two from the line for Bridgewater, and the Owls’ long outlet pass in an effort to get an opportunity at a game-tying three went out of bounds as time was expiring.
Boutillette finished with 16 points for the bears, and Canceiciao added 11.
Westfield was led by 21 points from Jill Valley, 13 points and eight rebounds from Nkamebo, and 10 points and six assists from Ashton.
Westfield will await word of a possible at-large NCAA bid or an ECAC tournament bid on Monday.
Westfield state senior Gabby Felix scored her 1,000 point on a jumper just 2:37 into the game. Felix was well on her way to becoming the Owls 13th 1,000 point scorer before missing the second half of the 2014 season with a serious knee injury. She battled her way back into the lineup this season and suffered through a 0-13 shooting night in the semifinals while just one bucket short of the magic mark.