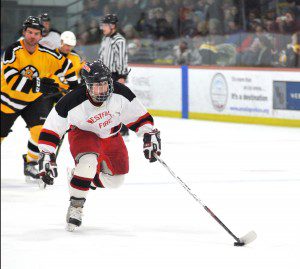 WESTFIELD – The current National Hockey League season may be in full swing, but there is nothing wrong if people want to get a bit nostalgic – in fact it is encouraged.
On Sunday, former Boston Bruins players will visit the Whip City when the Bruins Legends take on Westfield’s Firefighters Local Union 1111 in a charity hockey game at Amelia Park Ice Arena. The puck is scheduled to drop Sunday at 5 p.m.
Local firefighter and event co-ordinator Ray Nielsen said the event is coming at the most opportune time.
“Westfield (hockey) is so hot right now,” Nielsen said. “The Bruins are doing well. We have Westfield High School and St. Mary, and Westfield Youth Hockey.”
Bruins Legends, such as Don Marcotte, Bob Beers, and Dan Hodge, Quinton Brickley, Mike Boccuzzi, Tim Sweeney, Frank Simonetti, Randy Wood, Steve Rooney, Bill O’Dwyer, and Scott Young, a two-time Stanley Cup winner and two-time Olympian, will battle a local team comprised of firefighters (Chris King, Dave Kennedy, Shawn Trant, and Scott Bullock, among others), Noble Emergency Room Drs. Craig Shacher and Dr. Jacques Blanchet, and the Westfield News Group’s very own, Patrick Berry (our president).
“It should be a really cool event, but the best part is that the cost is free,” said Nielsen.
All donations will go toward the firefighters’ Save-a-Life program, which is used to sponsor local sports organizations such as Westfield Youth Hockey and Westfield Little League.
“All the money is given back to the community,” Nielsen said.
With economic hardships facing local sports organizations, Nielsen said it is more important than ever before that the community help out and attend events such as these.
Two clinics will be held prior to the charity game – one for Mites and Squirts (3 p.m.); another for Pee-Wee and Bantams (4 p.m.).
Marcotte and Beers will run the clinic with players from the St. Mary High School hockey team, and Westfield Youth Hockey League coaches.
“Hopefully kids will get a chance to work on skating techniques and maybe learn a tip or two,” Nielsen said. “And it’s an opportunity to skate with a past Bruin.”
Activities will abound with a Chinese raffle for hockey gear and Easton sports bags; a sports memorabilia auction; and, an autograph session with Bruins Legends in between the second and third periods.
“We are hoping to make it again as family friendly as possible,” said Nielsen of the event which has drawn favorable crowds and donations in past years.
The city’s youth hockey players are expected to join the Bruins Legends on the ice during the national anthem, alongside the local National Guard, and Westfield firefighter Roger Bernier on the bagpipe. St. Mary pastor Brian McGrath will deliver a blessing, and Westfield Mayor Daniel M. Knapik is expected to drop the puck.