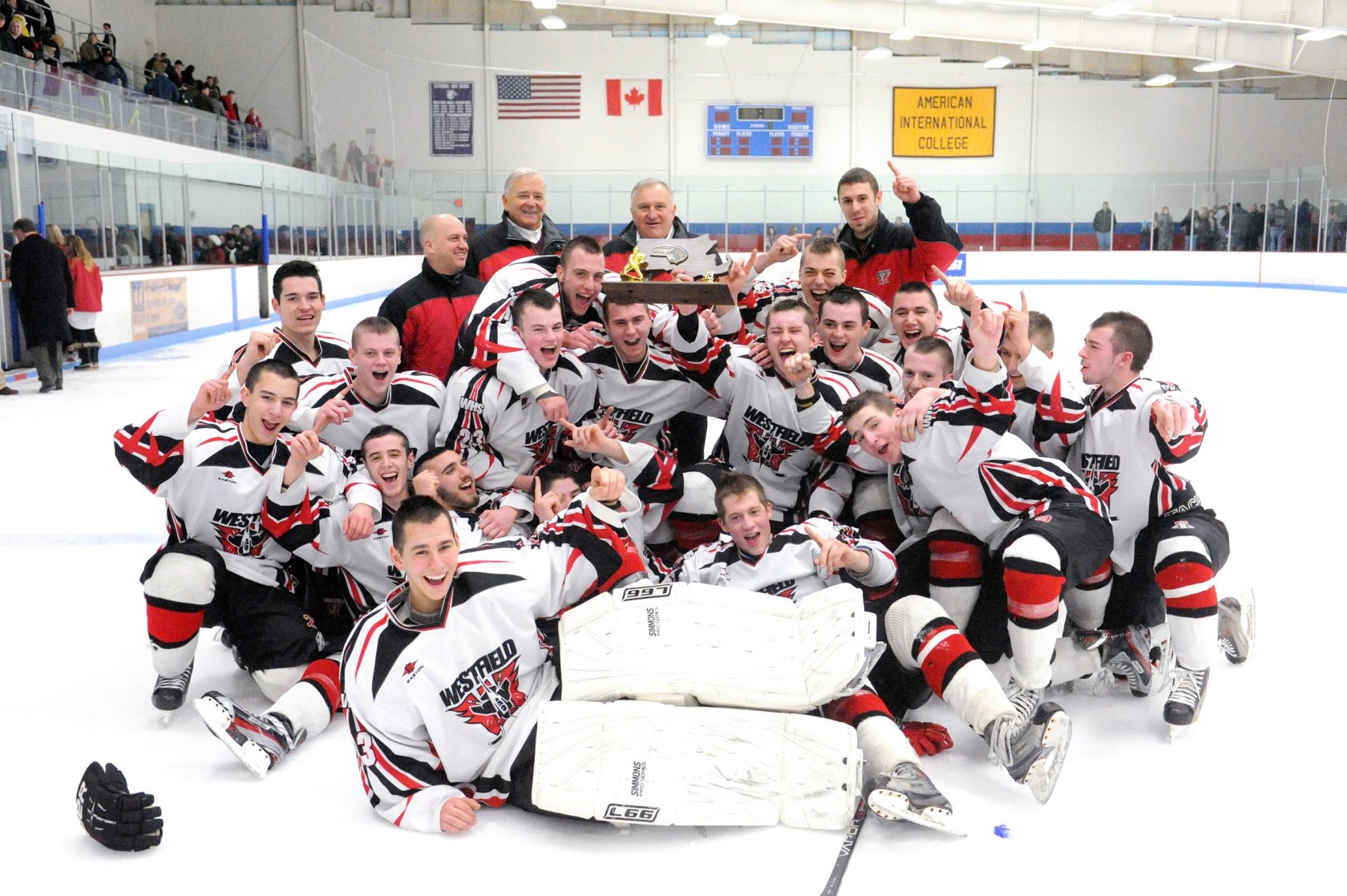 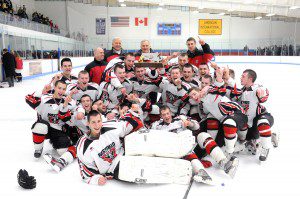 WEST SPRINGFIELD – If there was ever any doubt to who the Western Massachusetts Division 3 champion hockey team is, that debate was over in a matter of minutes – 13 minutes, 24 seconds to be exact.
That is the amount of time (13:24) that it took top-seeded Westfield to take a 3-0 lead against No. 2 East Longmeadow in the west sectional finals last night en route to a 7-0 championship blowout at the Olympia in West Springfield.
Sean Spohr and Adam Collier led Westfield (16-2-2) with four points apiece. Collier finished with one goal and three assists, while Spohr enjoyed a hat trick (and an assist).
“We’ve been looking forward to this game ever since last year,” said Spohr, whose team blew a 3-0 lead against Longmeadow in the WMass finals last season, and lost 5-3.
Maybe that is why the Bombers made every shot count.
Westfield scored three goals in a 2 minute, 11 second span late in the first quarter to silence the opposing crowd.
Spohr opened the late first-period scoring barrage 10:47 in with a brilliant stick-handling display, deking a defender in the crease, skating to his left untouched, and backhanding the puck past East Longmeadow sophomore goalie Matt Gasperini. Collier and Brandon Niemiec assisted on the play.
Neil Parrow took a pass from behind the net, and chipped it in with 2:39 remaining to make it 2-0. Mike Santinello and Chris Gentile earned the assists.
Then with 1:36 left, Collier scored on a power play. Spohr and Adam Hosmer assisted.
If there was a still any lingering doubts – doubtful, considering the pride and confidence of the Whip City – they were put to rest about midway through the second period when Spohr tacked on a second goal, the team’s fourth, to increase the lead with 8:23 left. Craig Lacey and Collier assisted on the play.
A few hats dotted the ice later on in the second period when Spohr collected the magical third goal (a hat trick). The goal came with 3:53 left in the period and gave Westfield a 5-0 lead. Collier and Nate Barnes set up the play.
No magician was around to pull a rabbit out of the hat for East Longmeadow (10-9-2) though. Except Westfield found something – another goal – scoring with 1:29 left. Connor Sullivan netted the goal, and Sam Evans and Chris Sullivan each assisted.
Neil Parrow tacked on a seventh goal, thanks to Mike Santinello and Ethan Nassar, in the third as running time elapsed with the game out of hand.
“Our defense played super, getting the puck out quick,” Westfield coach C.B. “Moose” Matthews said. “Our back-checking was out of sight, eating up the wings. We played with a lot of heart.”
Westfield, which now moves on to the state semifinals against the Central champion at Fitchburg State’s Wallace Civic Center, Thursday, hopes its heart continues to beat strong.
“I’m sure (our players) will be ready,” coach Matthews said. “They got a taste of it now.”
The Bombers will face the winner of Groton Dunstable (16-1-4)/Wachusett (16-3-2) Thursday at 7:40 p.m.