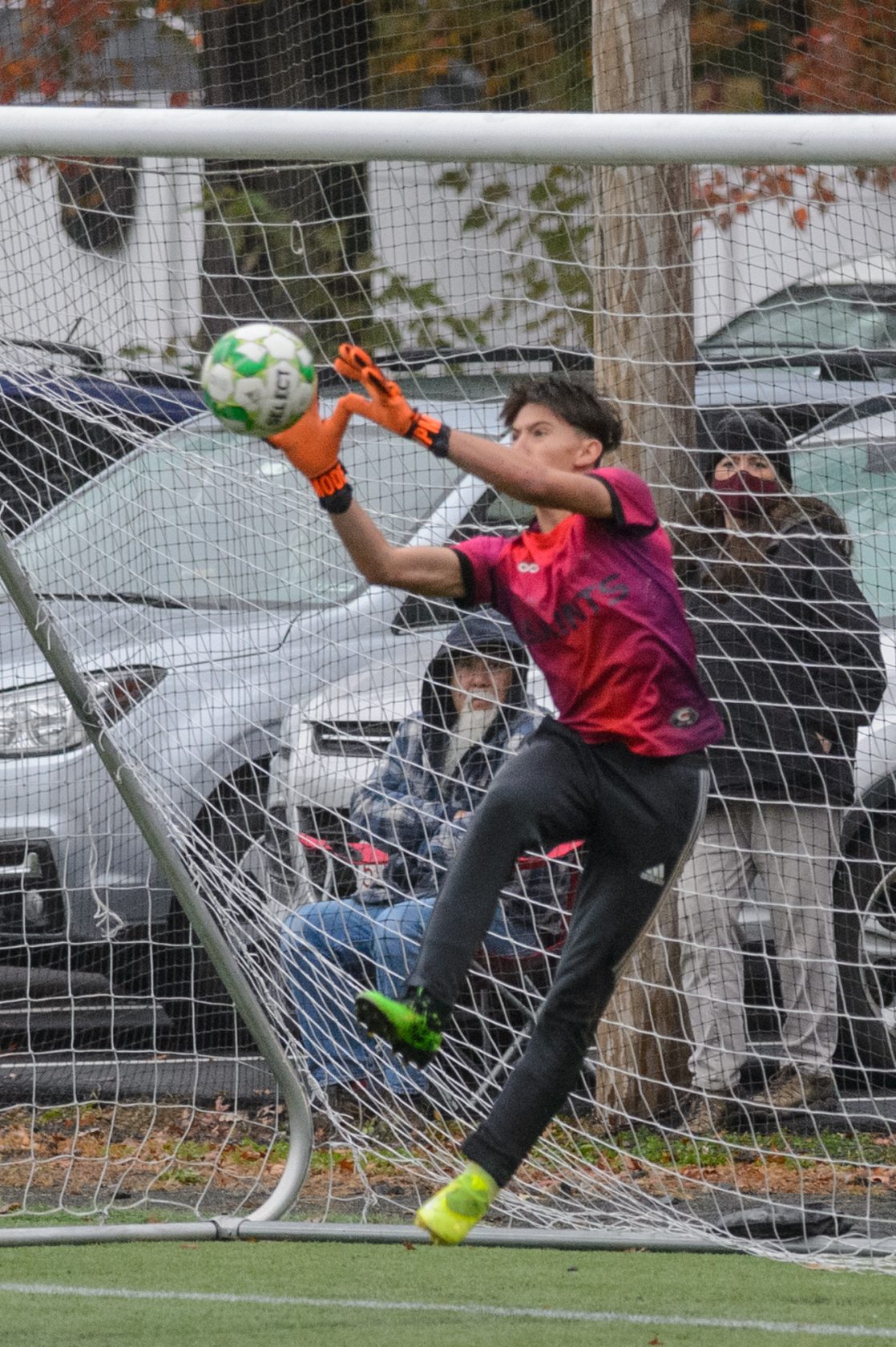 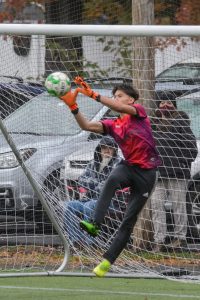 WESTFIELD – The new Pioneer Valley Interscholastic Athletic Conference-sponsored Western Massachusetts tournament season has arrived – – and has received quite the stirring start.
No. 3 St. Mary’s ran into a buzzsaw in the first round of the Class B boys soccer quarterfinals as sixth-seeded Monument Mountain stormed past the Saints 9-0 on a soggy, overcast afternoon Monday at Roots Athletic Center.
Six different players scored for Monument. Senior captain Jackson Potoski and junior Tyler Sprague tallied two goals apiece for the Spartans. Four others each had one.
“(We) struggled to keep pace with a very skilled, disciplined and deep Monument Mountain program,” St. Mary’s boys soccer coach Andy Lussier said. “Our lack of depth combined with Monument’s speed and quick touches were hard to keep pace with.”
St. Mary’s defense was under attack from the opening whistle. Saints goalie Thomas Baillargeon made 18 saves, coming up with several early saves to try and keep the game close but the attack was too fierce to control.
Monument senior captain Eddie Boyko lost his shoe in the 12th minute but still got a strong foot on the ball for his team’s first real scoring opportunity. Baillargeon made the save.
In the 15th minute, St. Mary’s had its first chance to score when Jonathan Baillargeon sent a nice cross pass through the box but nobody was there to follow it up.
St. Mary’s dodged a few more bullets midway through the opening half. The Saints thwarted two Monument corner kicks and the Saint goalie made another save. The pressure proved to be too much though as the Spartans secured the game’s first goal on a couple of nice touch passes that resulted in Potoski’s first goal from inside the box, past a diving goalie.
Monument kept its foot on the collective pedal, peppering the St. Mary’s goal with shot after shot after shot. Baillargeon must have turned away some seven or so shots before Boyko sank a shot with about five minutes remaining in the first half. The Spartans slipped another goal into the Saints’ net just before the half to go up 3-0.
The floodgates opened in the second half as Monument tacked on six more scores.
“We held our own for 20 to 25 minutes then just got gassed,” coach Lussier said. “The Saints played with grit for not giving up for the full 80 minutes and pushed right to the final whistle. We’re extremely hard of their sportsmanship and heart as they exemplified what it means to play sports.”
Coach Lussier credited Nathan Campbell, Josh Cote, Everett Stec, and the Saints keeper with strong defensive play, shutting down several Monument offensive attacks.
Said Lussier: “Thomas Baillargeon was big goal for us today stemming the Monument goal attempts.” 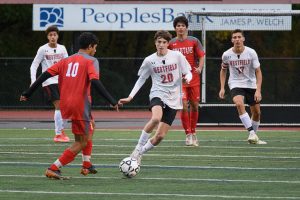 PVIAC CLASS A BOYS SOCCER QUARTERFINALS
Spartans advance past Bombers
No. 1 East Longmeadow 4, No. 8 Westfield 1
No. 1 East Longmeadow built a 3-0 halftime lead and held off a late rally from eighth-seeded Westfield at the Spartans’ home turf.
Nichita Solopa scored an unassisted goal for Westfield with five minutes remaining to give Westfield some momentum going into its next match, a regular season contest prior to the unveiling of the state tournament field Sunday.
“We hung as tough as we could but fell to a strong team,” Westfield boys soccer coach Andrew Joseph said.

DIVISION 1 STATE GOLF CHAMPIONSHIP
McCormick represents Bombers
Westfield High’s Jeremy McCormick finished tied for 85th at the D1 state championship with a 94. Wellesley’s Ryan Keyes won the competition by shooting a 1-under on the par-71.