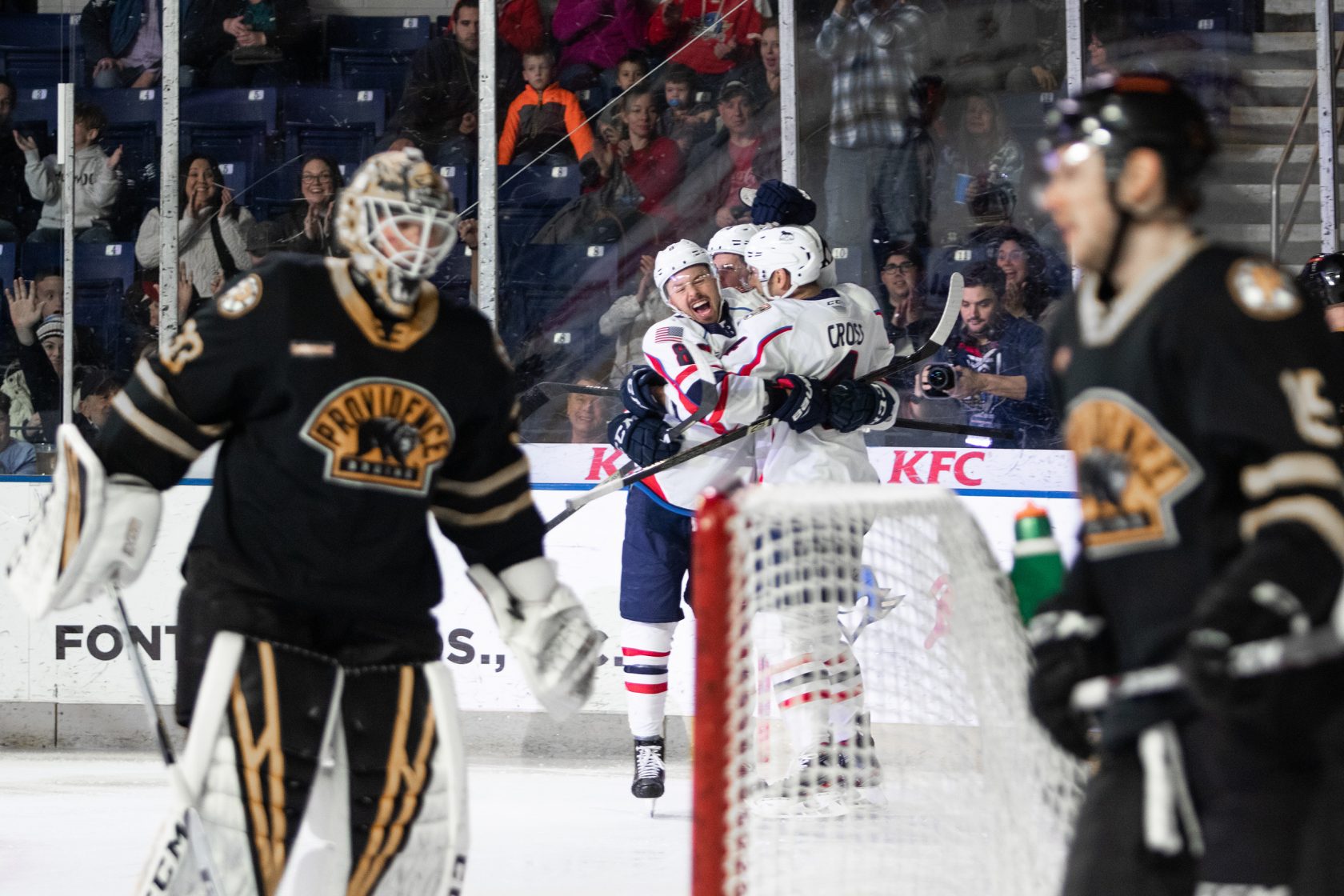 PROVIDENCE, R.I. – The Springfield Thunderbirds (15-14-1-0) could not capitalize on early chances, and the Providence Bruins (18-9-1-2) completed the home-and-home sweep on Sunday afternoon with a 5-0 win over the T-Birds inside the Dunkin’ Donuts Center.
The first period carried over surprisingly little bad blood from a feisty third period and overtime session the previous evening. Springfield had multiple chances to draw first blood with a power play and scoring chances in the opening minutes. Owen Tippett caught the crossbar with one chance, and Dryden Hunt could not pound a loose puck past Bruins goaltender Dan Vladar on the T-Birds’ first man advantage of the night. 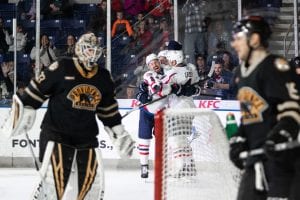 The Bruins survived the early threat and wound up getting 12 of the final 15 shots of the opening period. Two of those shots found their way into the net behind Sam Montembeault off the stick of Providence blueliners. First, Jeremy Lauzon funneled a wrist shot from the left point through a cutting screen and got credit for his first tally of the season to make it 1-0 at 6:11.
Near the end of the period, Jakub Zboril found himself in a similar situation at the Bruins’ offensive blue line, firing a wrist shot from the center point. With heavier traffic in front of Montembeault this time, the puck again found its way through the maze to extend the Bruins’ lead to 2-0 into the first intermission, to go along with Providence’s 17-8 first period shot edge.
Things went downhill in the second for the T-Birds after Tommy Cross was issued a match penalty for a hit to the head of Cameron Hughes. With a major power play out of that, the Bruins struck twice in less than a minute on goals from Jack Studnicka and Paul Carey.
Providence locked it down defensively, with Vladar securing his second shutout in his last four starts with 42 stops in the victory. Oskar Steen picked up the final Bruins goal on the power play in the opening minute of the third.
Montembeault’s night ended with 28 saves in defeat.
The T-Birds get a few days to regroup before hosting the Bridgeport Sound Tigers for Star Wars Night on Friday at the MassMutual Center at 7:05 p.m.
For more ticket information or to become a 2019-20 Springfield Thunderbirds ticket package member, or to purchase single game tickets, call (413) 739-GOAL (4625) or visit www.SpringfieldThunderbirds.com. – Courtesy of Springfield Thunderbirds

Sat., Dec. 15
Providence Bruins 5, Springfield Thunderbirds 4
The Springfield Thunderbirds battled back from a second intermission deficit to take a point from the Providence Bruins in a 5-4 overtime loss on Saturday night inside the MassMutual Center.
Former Bruin Tommy Cross jumped out to a red-hot start just 5:00 into the opening period, as Jayce Hawryluk set him up on a rink-wide feed from left circle to right circle in the offensive zone. Cross immediately let a wrister fly that tickled the twine in the top shelf, beating Max Lagace to give Springfield the 1-0 advantage.
Providence’s penalty kill proved to be its best asset in bouncing back from goals in the opening period, as Jack Studnicka picked up a shorthanded goal, sneaking a forehand shot through Philippe Desrosiers at 5:45 to tie the game on the rookie’s 11th goal of the season.
Cross was not finished, though, and on the same T-Birds power play, the longtime Bruin found a lane toward the net on the left wing side and slapped the puck through Lagace at 6:18 to restore the T-Birds lead, 2-1.
The Bruins responded one more time while shorthanded at 14:56, as Trent Frederic took his time with a 2-on-1 advantage to snap a wrist shot through Desrosiers’ blocker side to tie the game, 2-2.
Each team kept the opponent’s goalie busy, as Providence threw 18 pucks on Desrosiers, while the T-Birds launched 11 in Lagace’s direction.
Both teams kept the offense going with no hesitation to start the second. Robert Lantosi got the Bruins their first lead at 1:51 as he picked up a rebound in a race to the net to beat Desrosiers to make it a 3-2 game.
T-Birds captain Paul Thompson took little time to get the game back even as he beat Lagace on the glove side on a breakaway snap shot at 2:04 to tie things up, 3-3.
For almost ten minutes, defense finally reigned supreme, but after the Bruins drew their third power play chance on a Jack Rodewald goalie interference penalty, Providence finally solved the Springfield PK with Peter Cehlarik one-timing a cross-ice pass from Lantosi through Desrosiers to give the Bruins a 4-3 lead, which would hold up heading into the third.
With both teams pushing one another in a literal and figurative sense, the third period produced post-whistle fireworks at just about every stoppage in play. When Brady Keeper and Jeremy Lauzon took matching minor penalties, 4-on-4 hockey ensued and at 9:52, Aleksi Saarela danced into the offensive end on the right wing, cut to the net on his backhand, then shuffled a forehand shot into the top shelf to tie the game and eventually force the 4-4 game into overtime.
After generating about a minute of offense, a tired trio of T-Birds got caught on the ice, and with the game on his stick, Bruins captain Paul Carey out-waited Desrosiers from backhand to forehand to score the game-winner, ending the T-Birds’ streak of five straight wins in games that extended beyond 60 minutes. – Courtesy of Springfield Thunderbirds