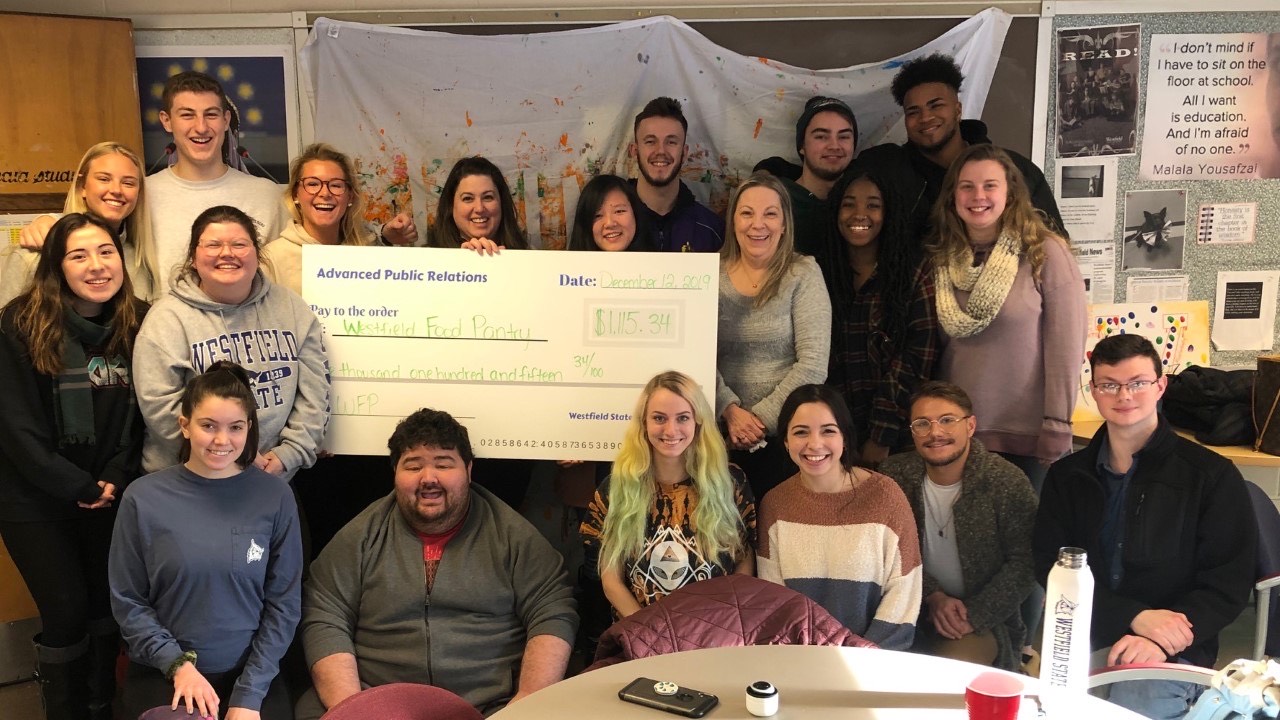 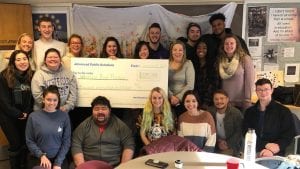 Students from the WSU Advanced Public Relations course at WSU presented a check for $1,115.34 to the Westfield Food Pantry. (Photo submitted by Suzanne Boniface)

The students raised the money through four separate events that took place over the week in different locations. Each event benefited the Westfield Food Pantry or helped to raise awareness about the organization that provides food to the financially insecure. The check for the donations was presented to Food Pantry Director Rebecca Hart on Thursday.

“The Advanced Public Relations Course is a civic engagement course at WSU.  Each semester we plan an awareness and a fundraising campaign for a non-profit,” said Suzanne Boniface, adjunct faculty of Communications at WSU, “This year we are working for the Westfield Food Pantry.  The students are divided into two teams. One group is the awareness team and the other is the fundraising team.”

The first activity on Dec. 3 took place in the Tim and Jeanne’s Dining Commons on the WSU campus. The activity was dubbed “Toss Out Hunger” and it gave students the chance to play a game of water pong. The game was the same concept as beer pong in which one attempts to throw a ping pong ball into an opponent’s cups of beer, but the beer was replaced with water. Students could play for a donation of one dollar each.

Two similar activities that took place on Dec. 5 were also organized by the students. The first one will take place from 8 a.m. to 2 p.m. at the Ely Campus Center. There, students and visitors can take part in “Paint for Pantry”, in which passersby could pop balloons filled with paint. After they are popped, a special message relating to awareness for the Food Pantry will be revealed.

The Paint for Pantry activity continued later that evening at the Shortstop Bar and Grill. There, visitors to the restaurant dipped their thumb or finger in a small amount of paint and marked it on a board as a way to show support for the food pantry.

In addition to the activity, the Shortstop Bar and Grill donated 15 percent of all food bills throughout the night to the Food Pantry.

The final event took at the Holyoke Mall all day on Dec. 7. Visitors to the table set up by the fundraising team donated one dollar to play a game of Plinko, the game most known from the game show “The Price is Right” for the chance to win a Starbucks gift basket.