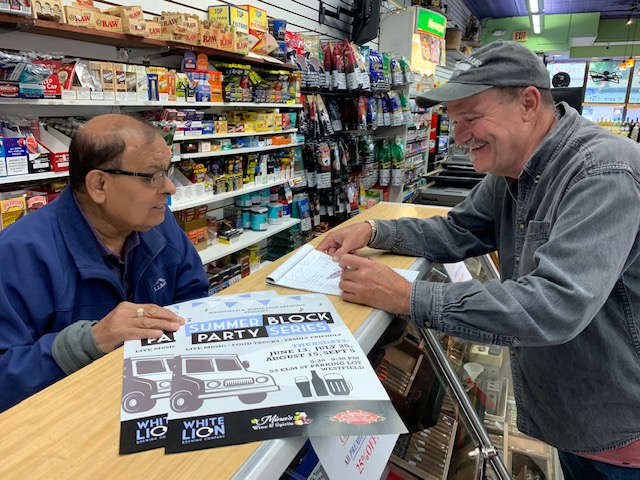 “This is what I’ve wanted to do for a long time,” said Prob Reshamwala, longtime owner of the Tobacco Barn and Mina’s Wine & Spirits on Elm Street. 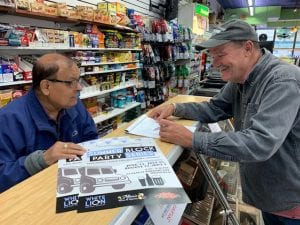 Prob Reshamwala, owner of the Tobacco Barn and Mina’s Wine & Spirits, reviews logistics for the first Summer Block Party Series in downtown Westfield with musician Tom Sawyer. Sawyer is coordinating the musical acts set to perform during the series.

Reshamwala said Tuesday that he researched a variety of events over the years and had taken notice of the atmosphere that beer garden events create that have sprung up throughout the valley.

“I have wanted to find a way to bring people of all ages together downtown and with the success of events hosted by the White Lion Brewing Company, this type of summer series seemed right,” said Reshamwala.

Posters are starting to pop up – like the “pop up” concept – in business storefronts and Reshamwala is hopeful that the series will take off. The series takes place from 5:30 to 9:30 p.m. at the 53 Elm St. parking lot. Ample parking is available on Elm Street as well as in the municipal parking areas.

“We will have tables and chairs and lawn games including cornhole,” said Reshamwala.

The series kicks off on June 13 with Tom Ingram and Jim Fogarty performing songs ranging from the Beatles to current artists. The series continues on July 25 with the Buddy McEarns Band, playing blues and rockabilly tunes, followed by Whiskey Traveler on Aug. 8, performing contemporary country music, and wrapping up the series on Sept. 5 will be Standing Bear, whose music encompasses the Grateful Dead to contemporary jam.

“Originally we had set Aug. 15 as one of the dates, however, we noticed a conflict with one of the Westfield on Weekends Concerts on the Green,” said Tom Sawyer, who is coordinating the logistics for the musicians. 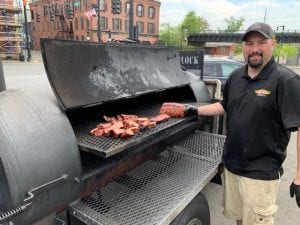 Dan Puza Jr., store manager of North Elm Butcher Block, is ready to heat the grills and serve a variety of barbecued offerings during the Summer Block Party Series in downtown Westfield.

The bands are scheduled to perform from 7 to 9 p.m.

“We are still discussing ways to provide up-and-coming local performers with some exposure before the bands start,” said Sawyer.

Ray Berry, founder and general manager of White Lion Brewing, is eager to bring the beer garden concept to the city.

“We are well-versed in bringing pop up beer gardens to communities and look forward to being a part of this series,” said Berry, noting that conversations between Reshamwala and Sawyer started earlier this year.

For any outdoor event, smoked meats and chicken are always a party favorite, and Dan Puza Jr., store manager of North Elm Butcher Block, will have his grills fired up for the festivities.

“Whenever we can get out into the community we enjoy doing it,” said Puza, noting his menu offerings will include barbecued pulled pork, beef brisket, barbecued ribs, pulled chicken, smoked chicken legs and turkey drumsticks.

Reshamwala said that while it has taken some time for this idea to come to fruition, he is hopeful that area residents will partake in the festivities and enjoy their time downtown.

“Mayor Sullivan and Peter Miller from City Hall have shown great support for this endeavor,” said Reshamwala, adding, “We hope this series brings people and businesses together this summer.”