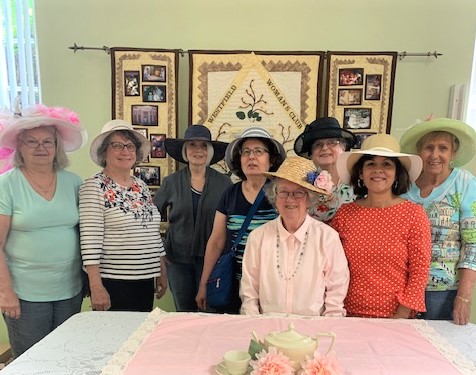 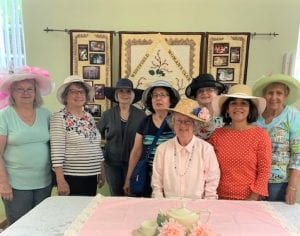 WESTFIELD – Sipping tea and enjoying scones and trifle — surrounded by flowers while wearing your best hat – aren’t the only reasons to attend the 22nd Annual Westfield Woman’s Club Garden Tea, but that would certainly be reason enough.

The party, which includes recognition of the Miriam Reed Community Service Award recipients, is June 26 at 1 p.m. at Stanley Park.

This year, for the first time, a couple is being recognized for their service to the city.

“We are honoring Anne and Harry Rock,” said WWC President Ann Mello. “In addition to their work on the Westfield 350, Anne has been a force behind the scenes at the Club.”

Mello and fellow WWC member Agma Sweeney touted Anne Rock’s ability to jump into any situation with a can-do attitude.

“She’s such a positive person,” Mello said. “She lifts us up – she’s just a positive force. Every great man has a great woman behind him, and Harry is super.”

Anne Rock is a retired teacher who spent 20 of her 37 years teaching in Westfield. The Rocks moved to the city 28 years ago, when Harry took the position of Westfield YMCA director, where he retired in 2016. Anne Rock attended the WCC Garden Tea over the years and eventually became a member. She was secretary of the Westfield Chapter of the American Red Cross, a past Zonta member and is a member of the Westfield State University Scholarship Foundation, the Shertluff Foundation, Westfield 350 Committee and is president of the Tuesday Afternoon Club.

The couple is honored with the award, said Anne Rock.

“It is with great appreciation that Harry and I have been chosen to be the Westfield Woman’s Club honorees this year,” she said. “We both wanted to find ways to give back to the wonderful community we call home. Thank you for this honor.”

Sweeney said Anne Rock has become an integral part of the community and embodies the spirit of Miriam Reed, the WWC member who started the Garden Tea as a fundraiser for a city nursery.

This year, proceeds from the Garden Tea Party will benefit phase one of the WWC building renovation project, which includes the addition of a handicap accessible lift and accessible bathrooms on the ground level.

Sweeney said this is something that will bring the 93-year-old clubhouse on Court Street into this century.

“We are retrofitting our building by creating an addition on the Holland Avenue side with a lift,” said Sweeney. “This will give access to the theater level and the ground level where we hold meetings and rent the space, so this will be a benefit to the entire community.”

The WWC clubhouse is one of the only buildings of its kind in the region. The WWC itself is a rarity today, but continues to thrive because of members such as Mello, Sweeney and Rock.

“The Woman’s Club is in the DNA of Westfield,” Sweeney said. “Our past president Angenette Fowler-Noble was the only female physician in the city and was the mother of Mary Noble, who gifted the city the land where the new senior center was built.”

Sweeney said it was women like Fowler-Noble who had the foresight to create the WWC. Mello admitted the makeup of the membership wasn’t always diverse and it was often the wealthy citizens who joined, but their mission was always to give back and do good work.

“It was a very select group in the beginning because 100 years ago, if you had time, this is where you gave it,” said Mello. “But most women didn’t have time – they didn’t have someone doing their laundry and help raising their children.”

While the membership is much more diverse today, Mello and Sweeney said WWC members do tend to be older, but that’s the nature of busy parents today.

“We do want to encourage young women to join,” Sweeney said.

For Mello, the best part of the Club, aside from doing good things in the community, is being with other women.

“For me, it’s about fellowship,” she said.

“I have found friendship. I found women to socialize with,” said Sweeney, noting that when the WWC was formed more than 100 years ago women were still fighting for their rights.

“Woman’s Clubs were a place where women could find their voice,” she said.

That is still true today.

“We want to stay viable and improve our facility and bring younger women into the fold,” Sweeney said.

The Garden Tea Party is from 1-4 p.m. and includes the infamous Hat Parade, refreshments and music by Ritchie Mitnik. The cover art for the program was created by WWC member Michele LePalme.