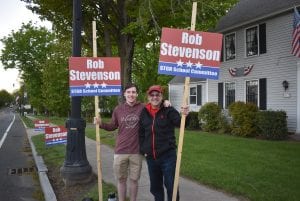 There were two contested races, one was the Southwick Board of Health three-year seat, which was narrowly won by Mikenzie Cain who received 315 votes to opponent Terry Putnam’s 306.

Town Clerk Michelle Hill said that it may not be the closest election result in town, but she could not recall a vote this close.

“I’ve never had to look into the possibility of a recount, but I will look into it tomorrow,” Hill said.

As of press time there was no indication that a recount would be requested.

Mikenzie Cain’s husband, John Cain, was elected to a two-year term on the Southwick Water Commission with 468 votes. 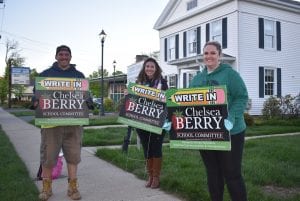 Before the results were in, Stevenson said that whether he won or not, “this was very interesting and enjoyable.”

When the results were announced, Stevenson, a Republican, said he looked forward to serving the community.

“I’m excited to be able to help and bring a new perspective to the committee,” he said. “It’s great to get a chance to do something like this and it’s humbling to see that when you’re willing to put yourself out there that you get support.”

There was no candidate on the ballot for Southwick Cemetery Commissioner, however, Heidi Johnston received 28 write-in votes and Lisa Anderson received five write-ins.