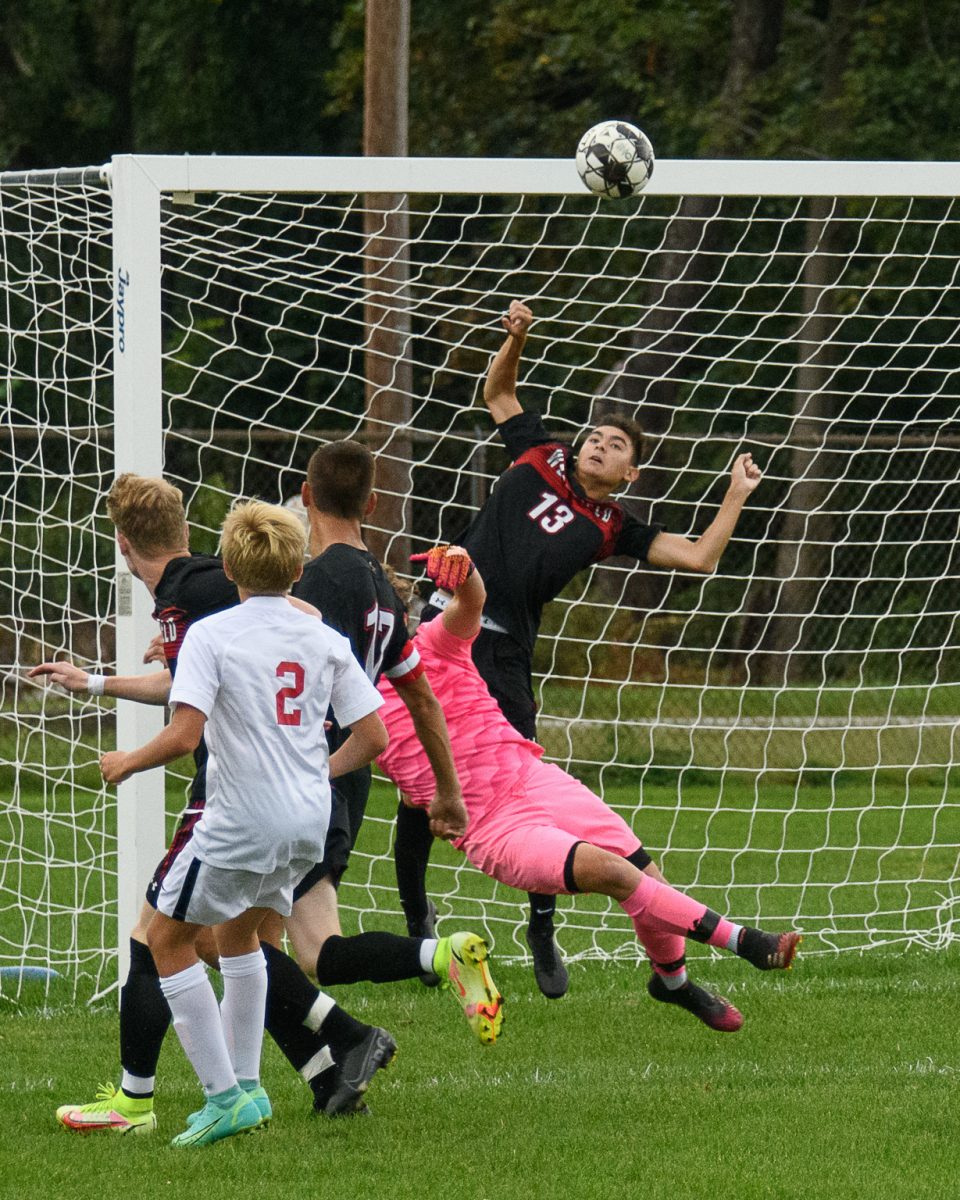 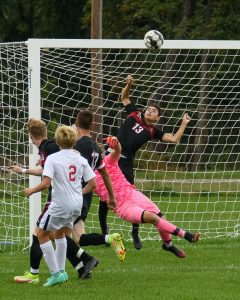 Jonathan Bulan (13) leaps into action after Westfield goalie Aiden Van Oostveen made a diving save in front of the Bombers goal. (MARC ST.ONGE/THE WESTFIELD NEWS)

WESTFIELD – Jeremy Edelson sent a ball to Jack Fortier that he hammered into the net for a 1-0 lead in Thursday’s high school boys soccer game at Westfield High. Some 90 seconds later, Fortier made it 2-0 with an assist from Shea Byrnes.
“We were just moving the ball pretty quickly,” Fortier said. “We got it up to me fast and I finished.”
Although Westfield’s offense raced out to the early two-goal lead, the Bombers defense would soon come under fire and the Pope Francis Cardinals would escape with a 2-2 tie.
Westfield senior goalie Aiden Van Oostveen (3 saves) came out of net to make the initial save on a Pope Francis shot near the midway point of the first half. He recovered in time to deflect the rebound shot high off the crossbar and harmlessly away.
A breakdown on defense by Westfield and a header from Pope Francis’s Jack Turmel resulted in a Cardinals goal in the 22nd minute.
“We had some miscommunication there,” Westfield High School boys soccer coach Andrew Joseph said. “On that set piece, that’s a goal that cannot happen.”
While it may have been a moment to forget, or rather learn one to learn from, Westfield’s keeper soon provided a highlight reel play that will likely have fans talking for quite some time.
With 10:03 remaining in the half, Van Oostveen made a spectacular diving save to his right to save a penalty kick attempted by Turmel.
“I read the penalty kicker a little bit and guessed the right way I guess,” Van Oostveen said.
The play drew the applause of his head coach. “That has to be the save of the year so far,” coach Joseph said. “He really bailed us out there.”
Pope Francis continued to pressure the Westfield goal in the second half. About six minutes into the last half, a rebound shot from Cody Martins found the back of the net. The game was tied 2-all.
“I feel like we were in control of the game and then just lost it,” Joseph said. Pope Francis didn’t lay down; they did the opposite. We have to give them a little bit of credit for working hard and coming back.”
Still, Westfield had some chances to go ahead.
Fortier nearly netted a hat trick and the likely game-winner on a penalty kick with 24:19 remaining in regulation but Pope Francis goalie Alberto Truoiolo (3 saves) made the save.
‘I thought I struck it pretty well, but he guessed the right way,” Fortier said. “It was a good save.”
When it comes to saves, Westfield might just very well be saving the best for last this season.
“I think we are still figuring out style; I think we are still figuring out an identity,” Joseph said. “You can tell it is still early. I don’t think we have everything clicking quite yet. We have some good ideas in attacking … we’ve cleaned up the defending a bit. I think we have come to understand what intensity level it takes to succeed at this level … but I don’t think we’ve put it together for 80 minutes quite yet.”

GIRLS SOCCER
Saints overwhelm Pioneers
St. Mary’s 8, Pathfinder 1
Emma Goodreau (4 goals, 1 assist), Allie Goodreau (4 goals, assist), Anna Puttick (goal, 3 assists), Aiden Levesque (goal), Macy Woodger (assist), and Eliana Uman Kimura (assist) accounted for St. Mary’s blistering offensive attack. Saints goalie Amelia Willenborg (10 saves) posted yet another shutout.
“I could not be happier with the win today,” St. Mary’s coach Patrick Olearcek said. “We had not won over there in so many years – – even with our most recent tournament teams – – so to come out and play like we did today and really take it from the very start was awesome to watch.”
“Everyone on the team contributed in some way today. Our defense was stout, our goalie continues to dazzle, and our communication was impressive.”
St. Mary’s (2-1) will next host Smith Academy Tuesday at Westfield Intermediate School on Southampton Road.