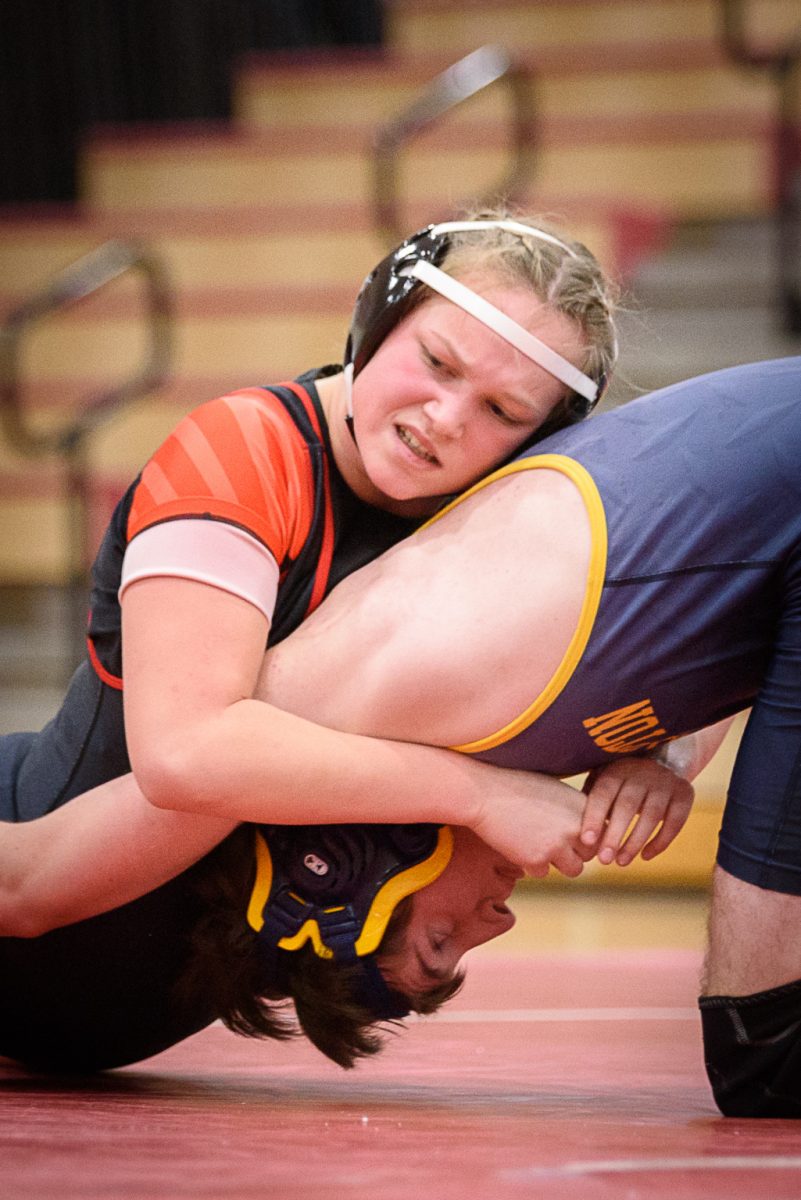 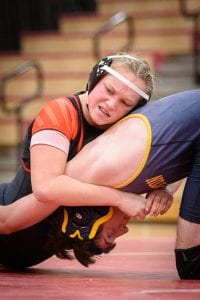 METHUEN – A high school goalie. A Young Marine. A student of the martial arts. And now a bronze medalist.
Westfield sophomore wrestler Caitlin Carter checks off all of those boxes, and more. Carter recently wrestled up a weight class at 162 pounds and wrested away a third-place medal at the state Division 1 girls wrestling championships at Methuen High School.
“Carter never gives up,” Westfield High School wrestling coach Chris Malinowski said. “She gives it everything she has for six minutes and it’s great to see it pay off. I couldn’t be more proud of her.”
Carter, who routinely appeared in 152 pound matches, rose to the challenge.
First, Carter knocked off Haverhill’s Gretchen Fieldhouse 2-1, hitting Fieldhouse with a reversal with less than a minute left in the match to complete a thrilling come-from-behind-victory.
Carter lost to eventual two-time state champion Central’s Samantha Springer. Springer is the only female wrestler to have beaten Carter this season.
With her tournament life on the line, Carter defeated Bedford’s Grace Hannigan by pin at the 1:20 mark of the first period.
Carter finally secured a bronze medal with a 2-1 win over second-seeded Boston’s Mireyda Perce Hernandez. The Westfield wrestler broke a scoreless tie with a takedown of Hernandez with four seconds remaining in the first period to take a 2-0 lead. She never looked back.
After seizing the slimmest of leads against Hernandez, Carter said her goal was to just keep her opponent from piling up any points.
“I was staying neutral; I thought ‘I can win this,’” Carter said. “I was really thinking smart. In the third period, starting out on the bottom, I made sure she wouldn’t score any points on me. I had to work from there to block her from getting points.”
Carter has her hand in quite the sporting life. During the 2019-20 fall season, Carter came up with several stops in between the pipes as the Westfield Technical Academy High School girls soccer team’s starting goalie.
Carter also gets a kick out of participating in martial arts and the Young Marines, a youth program which focuses on leadership, honoring veterans, teaching the importance of community service and promoting living a healthy, drug-free lifestyle.
She also works out a lot, lifting weights and running.
“(Caitlin) is, and always was, one of the hardest workers in the room,” Westfield High School wrestling assistant coach Mike Malinowski said. “There is never a time where she does not wrestle with the utmost confidence and desire to win. The strides of improvement she has made in the past two seasons are incredible. This is not the last time you’ll be seeing her name in the paper.”
Carter shares the same sentiments about the team’s coaching staff.
“The coaches really helped me this year,” Carter said. “I wouldn’t be here without them, and got me to where I am now.”
Carter said working with some of the heavier boys varsity wrestlers also helped her overcome challenges along the way. She credited senior wrestler Cam Foster for some of her success.
“There were times I was really down, (Cam) told me to just keep on going or had me work on improving something for competitions,” Carter said.
Now, everyone will be looking up to her.