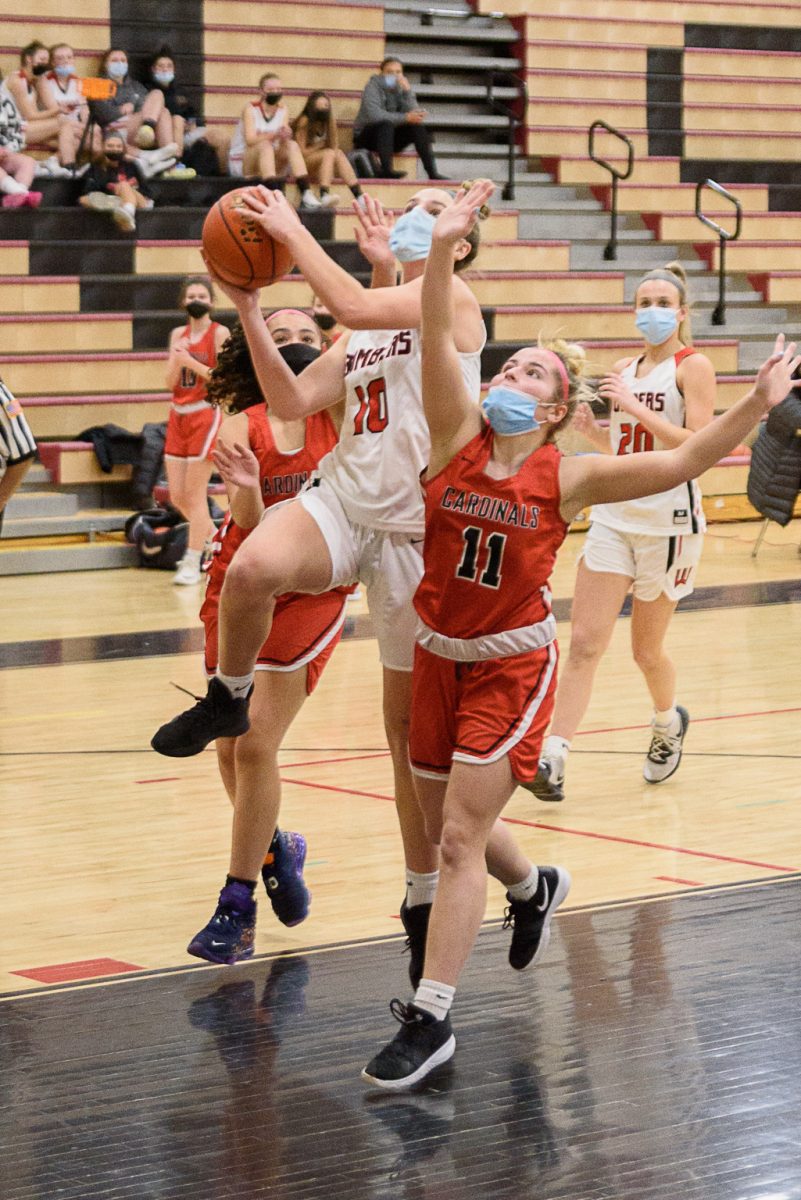 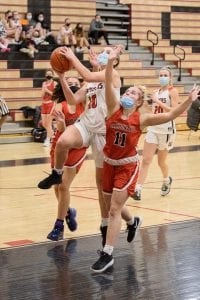 WESTFIELD – You have to applaud Westfield girls soccer senior guard-forward Chandler Pedolzky for taking matters into her own hands to help the Bombers end a two-game losing streak.
Pedolzky spurred a 24-0 run to begin Monday night’s high school girls basketball contest against Pope Francis, exploding for 11 first quarter points as the Westfield Bombers turned back the visiting Cardinals 48-24. She finished with a game-high 19.
“We had a few setbacks losing to Amherst and Agawam so the last few practices we’ve been really working on what we need to improve which is boxing out, passing to hands and not to somewhere else-wise,” Pedolzky said. “I think we adjusted to that well and it showed in tonight’s game.”
Pedolzky nailed the first field goal, draining a 3-point shot just over a minute into the game. Westfield’s Claire Griffith (8 points) buried two 2-point baskets, Bombers’ Morgan Fillion (4) and Saige Smith (4) each hit 2-pointers, and Ali Piper converted a free throw, all during the team’s 20-0 first quarter shutout.
Fillion and Pedolzky capped off the 24-point run with 2-point shots to begin the second quarter.
“I think we did a lot of team sharing overall passing to each other,” Pedolzky said. “A lot of our players got points on the board, not just a few. I think we struggled a lot against Amherst scoring-wise. We scored a lot more tonight obviously and had easier opportunities.”
Pope Francis attempted to whittle down the Westfield lead the best it could in the second quarter, but Pedolzky and her teammates had an answer each time. After Isabella Meadow scored the Cardinals first basket two minutes into the quarter, Pedolzky drew a foul and made both free throws. Lily Turmel made a 3-pointer to cut the deficit to 26-5 with 3:19 remaining in the half but Pedolzky made a two.
Westfield extended its lead to 22 points with just over four minutes remaining in the third quarter before Pope Francis responded with back-to-back 3-pointers, a long range shot from Meadow and a Christina Ronc and-one to make it 35-19.
Westfield’s Dayanara Morales put the game out of reach with a dominating fourth quarter effort in her first varsity game. Morales scored all nine of her points over the final eight minutes.
“We got back to having intensity to be in the right spots early,” Westfield girls basketball head coach Dylan Willey said. “I thought in our two losses we kind of got lackadaisical with getting back and kind of just going with the flow. Today we were better at establishing our defense first.”
Willey said Morales also added another key component with not only her scoring prowess late, but also grabbing several rebounds.
“Day was strong tonight,” coach Willey said. “She put herself in good position.”
Notes: Westfield suffered multiple injuries Monday night, including the loss of starting senior point guard Emma Pedolzky to a lower leg injury in the opening minutes against Pope Francis. Said her twin sister Chandler: “After the timeout, instantly we were playing for her. That’s like what we do when anybody gets hurt around here. We play for each other.” …Coach Willey also expressed his concern for Emma following Monday night’s game. “Emma may be the most important person on the team, just because she has a skillset to do a whole bunch of different things,” he said. “She’s not just our best defender. She’s not just our starting point guard. She uses her body well. She plays with her eyes up. She’s a great passer. To see her go down was unfortunate. Even on bad days we have some good resolve. We hope to have her back soon because she’s important.”