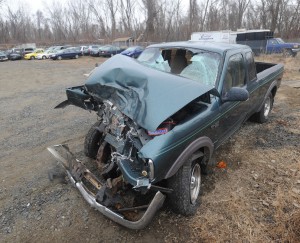 The remains of a 1993 Ford Ranger pickup truck await final disposition in the yard at Michael’s Towing on Clifton Street after a crash Thursday evening on Meadow Street in which the operator, who was not restrained by a seat belt, suffered a head injury. The truck hit two trees. (Photo by Carl E. Hartdegen)

WESTFIELD – A city man was admitted to Baystate Medical Center Wednesday evening after the vehicle he was operating on Meadow Street struck a tree.
The crash was reported to city police at 8 p.m. and officer Harry Sienkiewicz of the department’s traffic bureau arrived at the accident scene moments after the Fire Department ambulance, rescue truck and a pumper truck arrived.
Sienkiewicz reports that the 1997 Ford Ranger pickup truck, operated by Wes T. Kellogg, 41, of 79 Meadow St., failed to negotiate a curve while operating southbound on Meadow Street and struck a curb.
The truck then glanced off a large maple tree and continued to strike a second similar maple tree, head-on.
Kellogg was alone in the truck.
Sienkiewicz said that the pickup “hit it (the tree) with such force that the rear end was raised 20 feet off the ground.” When the rear of the truck came down, it struck the first tree and scraped down the trunk.
Sienkiewicz reports that Kellogg was not wearing a seat belt and was “partially ejected through the windshield of the truck” which caused him to sustain head injuries.
Sienkiewicz said he also suffered “major trauma to his right leg.”
Sienkiewicz said that the vehicle’s air bags deployed but said “air bags work in conjunction with seat belts” and stressed that “he would never have sustained the injuries he did if he was seat belted.”
“A high rate of speed was a factor in the crash” Sienkiewicz said.
Kellogg was extracted without complications from the vehicle by firefighters and transported to Baystate Medical Center where he was admitted.
He was reported to be in fair condition at the hospital on Thursday morning and by yesterday his condition had been upgraded to good condition.