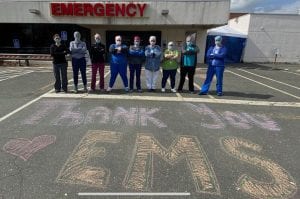 The professional musician began hosting the concerts from his Los Angeles home in early April and wanted to do something for his hometown. He reached out to Bruce Bussiere at Baystate Noble and decided to create a donate option on his Facebook page to collect funds to purchase personal protective equipment (PPE) for hospital staff during the coronavirus pandemic.

Kopatz had only performed on Facebook live once before that show. He set up his equipment in front of his home and performed for his neighbors as well as Facebook viewers as a way to keep playing and entertaining. Since then, it’s become a regular event. “I have been playing regularly and streaming it in front of my house on Saturdays for everyone’s enjoyment,” he said. “We’ve have been doing it since around April 4  We get close to 1,000 people streaming it live every show. Since then there have been around eight Saturdays I’ve performed and collectively over 10,000 views of all the shows I have done.”

Kopatz said although he has not been able to perform outside of his neighborhood yet and he misses the live music circuit in LA, he has worked steadily throughout the pandemic.

He has an in-house studio where he writes music for shows such as Ellen, CSI, Entertainment Tonight and Dr. Phil. He also produces pop music and works for Sony Home Entertainment, which he said he appreciates now more than ever because he still has work.

COVID-19 continues to affect life around the world and Kopatz said he was happy to help in some small way “back home.”

“I am so happy to have had a beneficial impact on my hometown hospital where my whole family was born and wear I myself have been a patient on a few occasions,” he said. “I am also proud of the outpouring of support from the local Westfield community and even my neighbors and friends in LA and throughout the country to have donated to an important cause. These are the very times we all need to stand up for each other.”

Bussiere thanked Kopatz publicly on Facebook. “From all of the staff at Baystate Noble we want to thank all those who donated being on the front lines for our community is what we do. A GREAT thanks to a phenomenal musician and human being Dave and his family have given us far more than we ever could have expected thank you so much we are indebted to you,” he wrote.

Kopatz said he takes precautions and urges others to do so.

“Covid cases are on the rise [in California] like all of America with the reopening,” he said. “There seems to be the ‘have masks’ and the ‘have not masks.’  I hope we will all start to consider the impact we have on one another and collectively err to the cautious side and wear masks.”

Kopatz’s efforts were noticed by an LA documentary company.

“They heard what I was doing and approached me to film my show and make a small documentary out of it,” he said. “It should be up on my YouTube channel that I am starting shortly.”

Kopatz performs live on Facebook most Saturdays from 5-7 p.m. and will play live July 4 with his trio.