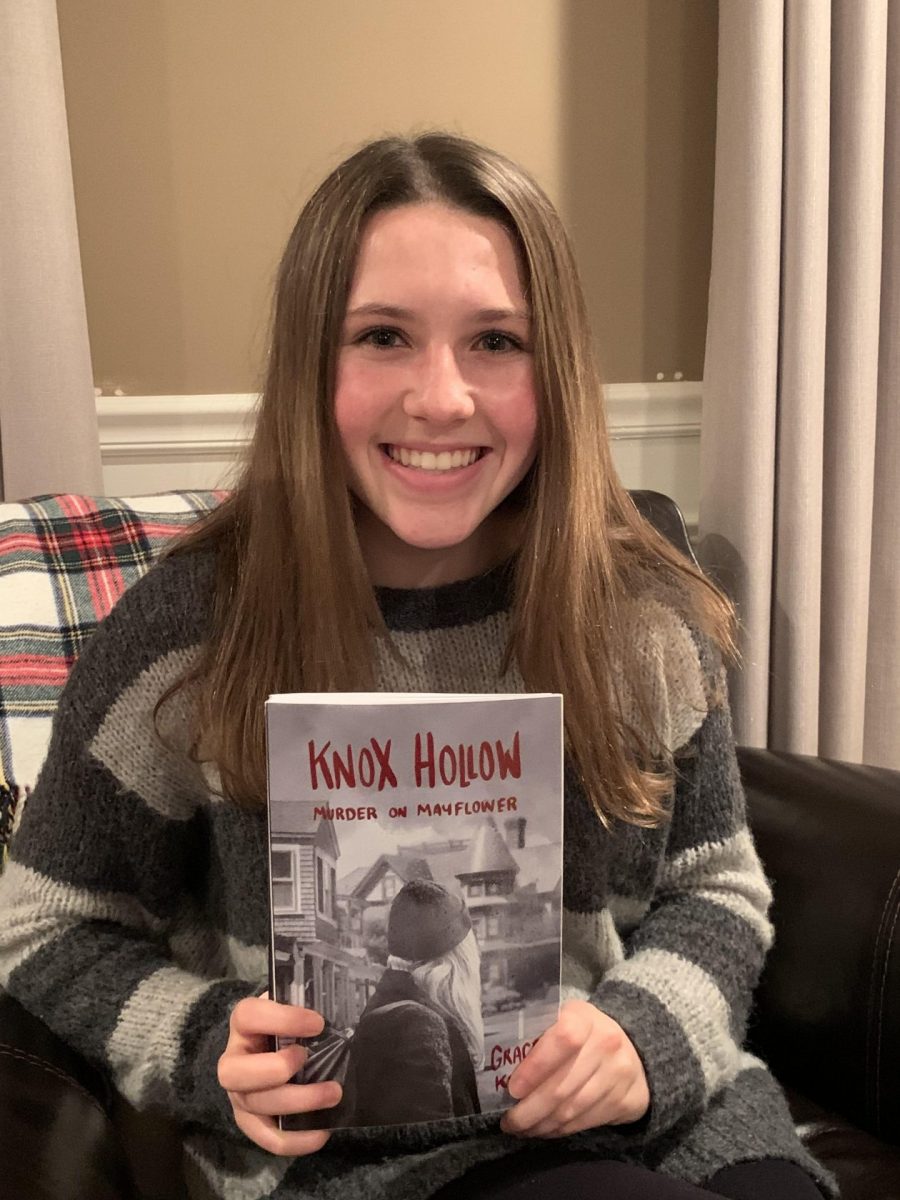 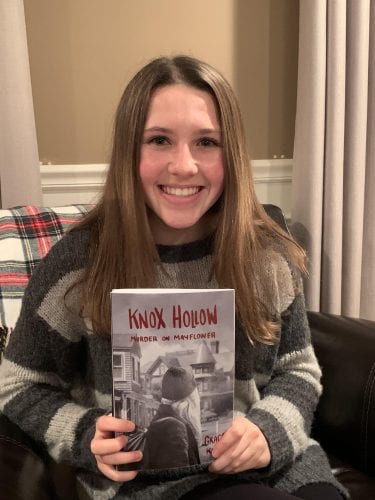 WESTFIELD – Grace Kuhn, a junior at Westfield High School, has published a novel called “Knox Hollow: Murder on Mayflower.” The novel centers upon a 17-year-old who becomes involved in a murder investigation, and it is available for sale on Amazon.

Sitting down on Google Meet with Kuhn and her former teacher, English Language Arts Supervisor Mary Keane, Kuhn said she always liked to write. “I would get an idea, and write a little,” she said.

Kuhn originally had the idea for this book in July, 2019. But when school started in the fall, with running cross country and other demands, she didn’t have time to work on the idea, and didn’t touch it again until March, 2020.

“I read the original in March, and wrote what would become the first chapter. I showed it to my Mom (Jennifer Kuhn), and she said she wanted to know what happened. A week later, the pandemic hit,” Kuhn said, adding, “I had a ton of time. I couldn’t control what was going on outside, but I could control what I was doing and how I carried on myself.”

Kuhn said the characters became a part of her, and she would think about them while she was running. They include Izzie, a 17-year-old who moved from Oregon to Knox Hollow. She said Izzie had a lot of issues going on in her family, including a divorce. She was not excited about moving to the wealthy town in Massachusetts, but ends up meeting a very close group of friends. She described Izzie as “sarcastic.”

Izzie meets Hazel, who Kuhn says is soft spoken and kind, and they become very good friends. Izzie talks about never having had a good friend like Hazel.

Izzie’s younger brother Luke is her best friend. He is very protective of her, and a lot of people think he’s her older brother.

Shea becomes Izzie’s love interest. He is also very shy, quiet and nice, and becomes a very big part of Izzie’s life, helping her to get through her family issues.

Asked whether she herself is sarcastic like Izzie or shy like the other characters, Kuhn said the latter. “I’m pretty shy, I’m not really sarcastic. We’re pretty similar, but (Izzie) is a more outspoken version of me. I’m more on the quiet side. I definitely think about what I say. She’s the opposite, says whatever is on her mind, then has to backpedal,” Kuhn said.

Kuhn said the story developed as she was writing. “When I first started, I didn’t think it would really turn into much. I had a rough plan. Other than that, I wrote wherever the pen took me. It’s a murder mystery, and when the murder happened, I said I had to do some planning, I didn’t know who the murderer was,” she said.

Kuhn said she has long been a fan of murder mysteries. “Ever since I was pretty young, I loved reading mystery novels. Agathie Christie is one of my favorites,” she said, adding that she was really struck by “The GIrl on the Train,” by Paula Hawkins. 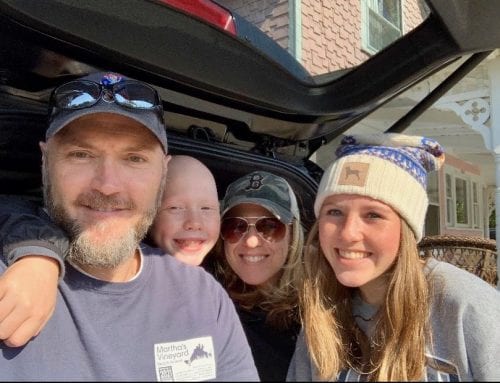 Kuhn also leaned on her friends in real life as she was writing. “My two best friends read it chapter by chapter as I was writing it. They kept me motivated because they were waiting for the next chapter. They have been so supportive – I don’t know what I would have done without their help,” she said.

The book is 20 chapters long. Kuhn started writing it in March, and finished in July. She said sometimes a chapter would take her a day or two to write, and then she would get writer’s block, and it would take her longer.

“I kept myself on a little bit of a schedule. A lot of times I would wake up and write, then walk with my Mom in the morning and go running, and then sit outside when it was nice out and write for hours, if I could,” she said.

When she finished writing it, she printed it out and made a lot of corrections. She put all 300 pages in a binder and gave to a lot of her family and friends to read. Then she had her Mom read it again. “I could not have done it without all the support of my family and friends,” Kuhn said.

Kuhn repeated that she didn’t think it would turn into anything, but her parents were very excited about what she had done, and encouraged and supported her to publish the book. She said her dad (A.J. Kuhn) had a good friend from high school who had self-published two books. She spoke to Grace, then ended up guiding them through the whole process and also helped to edit the book.

The family decided to go to the Harvard Book Store in Cambridge to print the book, where they have one of the oldest printers in the world, according to Kuhn, and a woman there designed the cover. “That’s one of her jobs. She asked me for an idea. I told her black and white and words in red. I don’t know how she got that, but I loved the cover,” Kuhn said. 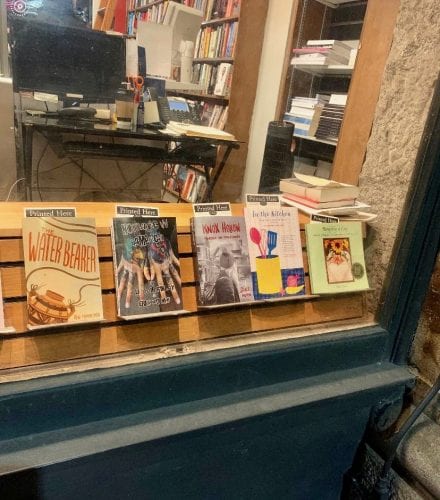 Grace Kuhn’s cousin took a picture of her book in the window of Harvard Book Store. (PHOTO SUBMITTED)

When the book was printed at the end of December, the Harvard Book Store put it in their front window. “My cousin lives in Cambridge, and sent me a picture of the window,” Kuhn said.

Keane asked her if she had let her teachers know she was writing the book.

“I’m pretty shy,” Kuhn said. Trish LeClair, a retired teacher, was one of her editors. Kuhn said one of her current English teachers found out from a friend of hers after she posted about it on Facebook. Then the superintendent posted, and the word really got out.

“I had Grace as a student when she was in 8th grade. Halfway through that school year, I left that job to become the ELA supervisor,” Keane said. When she got the job, Keane said she told her husband, “I have to tell Grace. Her writing was so notably outstanding. It was really fun and a joy to teach a student that loves writing,” she said, adding that Kuhn was nominated for a writing award last year by LeClair, which also thrilled her.

Jennifer Kuhn then briefly joined the conversation, and immediately became emotional. “It’s incredible. I could cry just talking about it. My husband and I are so proud of her. To watch how she did this, and how far she’s gone. I’m so proud of her that she took a horrible pandemic and made something good of it,” she said.

When asked if there might be a sequel to “Knox Hollow,” Kuhn said she is actually 130 pages into a new book, with different characters and set in a different town, that she started in September.

“I do have an idea for a sequel for ‘Knox Hollow’ with the same characters,” Kuhn added.