WESTFIELD – Most 11-year-olds spend their screen time playing online games or chatting with friends. But Finn Chisholm-Godshalk is not most 11-year-olds.

Although he does enjoy the same things as his peers, Chisholm-Godshalk also spends much of his screen time learning about history and searching for interesting historic artifacts.

One such item – a rare 1935 Danish World War II helmet – piqued his interest but the price was out of range at 400 euros.

“He emailed me and said I could have the helmet for free if I would give his wife English lessons,” Chisholm-Godshalk said. He agreed and began teaching Xiaofeng Lin Hong, who goes by Lin, twice a week for a total of 24 lessons. Adding to the unique nature of the exchange, Hong and her husband are Chinese and live in Latvia. 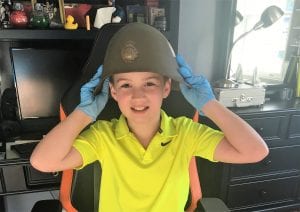 Finn Chisholm-Godshalk carefully places a 1935 World War II helmet on his head. The young history buff received the helmet in exchange for teaching English virtually to someone living in Latvia. (KIM CHISHOLM-GODSHALK PHOTO)

“My husband came up with this because he liked Finn very much,” said Hong. “Because I live abroad, I meet a lot of foreign people but no matter where you come from, people are the same.”

Chisholm-Godshalk’s sister Teagan, 13, pitched in and the siblings planned lessons, which Hong said were centered around helping her speak in a more conversational manner on her YouTube show about minimalism.

The two young teachers said they drew from their own school courses and their conversations with friends to create lesson plans, which were also guided by what Hong wanted to learn.

Hong said she wanted to learn to speak better English from young people.

“I wondered how different it would be to learn from kids,” she said. “I feel it’s a different experience learning from kids – it’s more fun. Adults talk more about the economy and politics. Kids feel more free and are more relaxed.”

The Chisholm-Godshalks taught Hong to speak just by telling her about their lives. Hong said she does not have children and does not have many opportunities to speak English, especially with children.

Chisholm-Godshalk said teaching someone across the world has been “very fun.” Hong said she was impressed with both young teachers and noted that the way they speak and the topics they speak about are much different than when she was growing up in China.

“I don’t know kids their age in China today, but when I was young, I put more emphasis on myself,” she said. “I am very impressed with them and their manners.

Before the planned lessons were over, Luca Hong sent Chisholm-Godshalk the Danish M-23 helmet in good faith. He said less than 100,000 were manufactured. For Chisholm-Godshalk the barter system was a win-win in many ways: he received a historic helmet, taught someone a language, made international connections, bonded with his sister and had a blast.

“I hope we stay in touch,” he said, which Hong and Teagan Chisholm-Godshalk agreed was the plan.