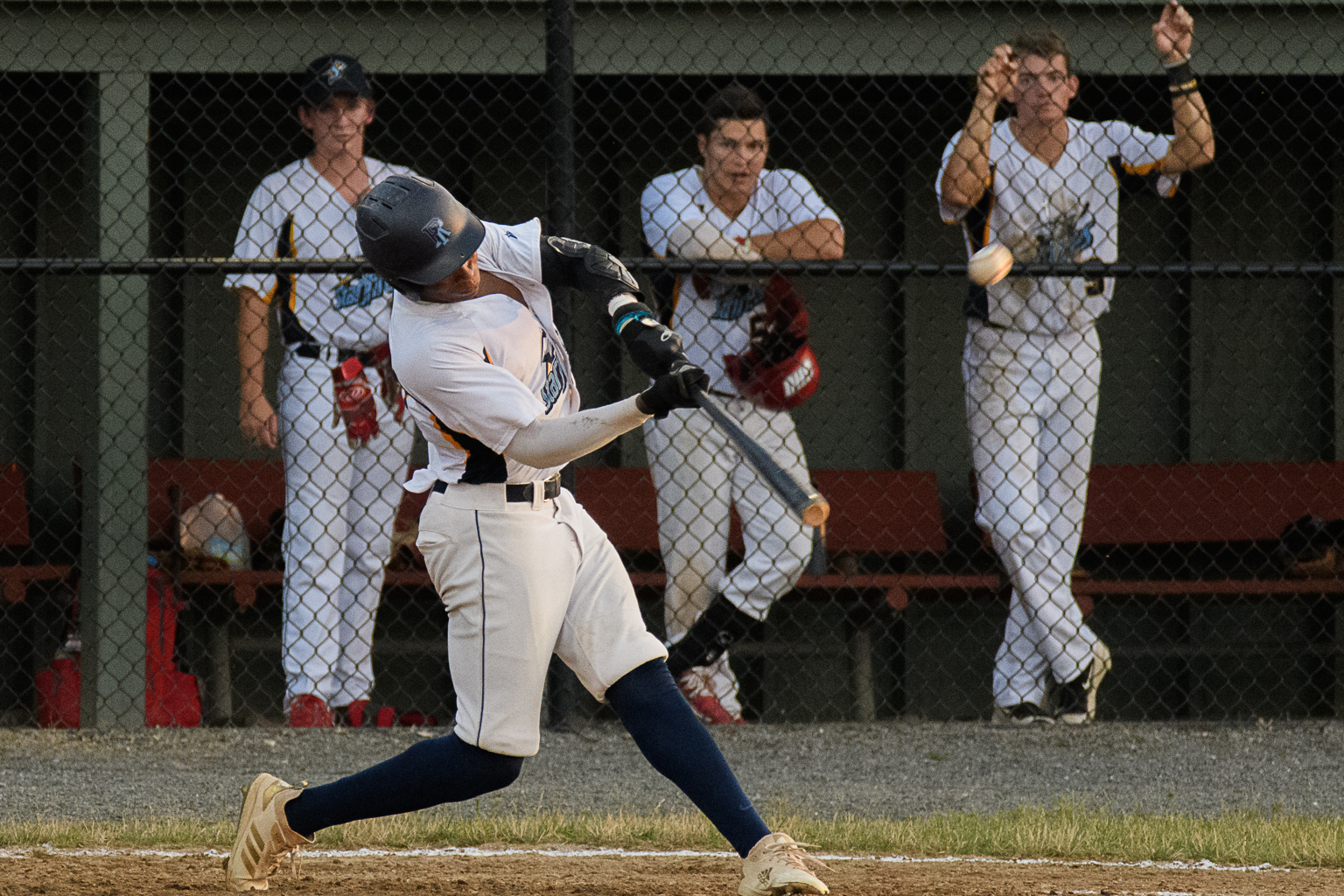 WESTFIELD – Westfield Starfires slugger Mark Coley may be locked into playing for the Whip City’s Futures Collegiate Baseball League for the 2020 season at Bullens Field, but he is leaving the ball park quite routinely these days.
Coley hit his league-leading (as of July 17) fourth homer in the Westfield Starfires 6-2, 10-inning loss to the Nashua Silver Knights Friday night at Bullens Field. 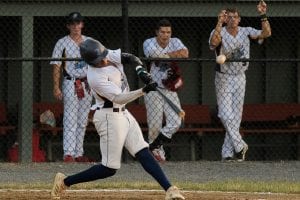 Westfield Starfires slugger Mark Coley sends one out of the park for a home run in Friday night’s 6-2 loss to the Nashua Silver Knights at Bullens Field. (MARC ST.ONGE / THE WESTFIELD NEWS)

Coley (University of Rhode Island) gave Westfield an early 2-0 cushion but Nashua got to the Starfires bullpen late, scoring six unanswered runs over the final two innings to complete a stunning come-from-behind victory.
Nashua’s late-inning rally began in the ninth when No. 3 batter Jared Dupere (Northeastern) singled to lead off the inning. Clean-up hitter Dominic Keegan (Vanderbilt) smashed a booming two-run home run over the right field fence to tie the game 2-all.
A thunderous 3-run homer from Dupere in the 10th inning shook the home team, and provided more than enough for the visitors to pull away.
Westfield wasted a solid outing from lefty Chase Jeter (Sacred Heart University). Jeter retired nine straight batters to begin the game. He tossed six scoreless innings before turning the ball over to the bullpen.
Nashua starting pitcher Patrick Harrington (Assumption) also started strong, but Westfield tested his arm sorely.
Harrington was cruising along until the third inning when he allowed consecutive one-out free passes to Michael DeMartino (Southern Connecticut State) and Braydon Seaburg (Quinnipiac). Coley, who had been launching balls out of the ballpark with some regularity as of late, hit a towering double deep into the outfield. DeMartino attempted to score, but was thrown out at home plate. Harrington induced a groundout to end the threat. 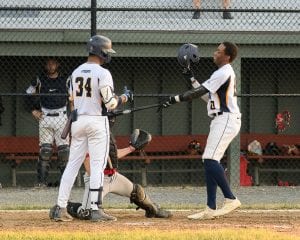 A thumbs up and a smile are all that’s allowed under COVID-19 after Mark Coley’s home run Friday night at Bullens Field. (MARC ST.ONGE / THE WESTFIELD NEWS)

In the top of the fourth, lead-off batter Nick Shumski (Merrimack) reached on an infield error. With one out, Shumski stole second base. Dupere singled and stole second. Jeter recovered though in time to strike out Ben Rounds (Harvard).
Westfield threatened again when Anthony Porrino (Sacred Heart University) laced a single down the left field line to begin the home half of the fifth. Two flyouts sandwiched around a ground out ended the inning.
Nashua had its chance a half-inning later when Troy Schreffler, Jr. (Maryland) hit a two-out single and stole second base. After issuing a walk, Jeter forced a ground out to end the threat.
Just moments before the dual shutout stretched into the seventh, Coley extended his arms and smashed a solo homer about 400 feet over the right center field fence to begin the sixth. Harrington finished out the inning by retiring the side (ground out, strikeout, fly out).
Westfield went up 2-0 in the seventh with a two-out, RBI single from Michael DeMartino. Michael DeMartino knocked in Drew DeMartino, who reached on a dropped third strike and advanced to second on a wild pitch.
A haunting silence in the eighth only portended what was to come in the ninth and 10th innings.
Notes: Reggie Crawford (UConn) slugged a one-run homer for the Westfield Starfires in Wednesday night’s 3-2 loss to the Worcester Bravehearts. Starfires pitcher Jimmy Hagan (Quinnipiac University), of Westfield tossed a scoreless 1 2/3 of relief. He allowed one hit, one walk, and struck out one batter. …Westfield rallied from a one-run deficit to defeat the New Britain Bees 6-4 Thursday night at New Britain Stadium. Porrino went 4-for-4 with two doubles, a walk, two runs, and a RBI. Ramon Jimenez (Boston College), of Chicopee finished 3-for-5 with a triple and run scored. Coley (University of Rhode Island) launched his third homer of the season.