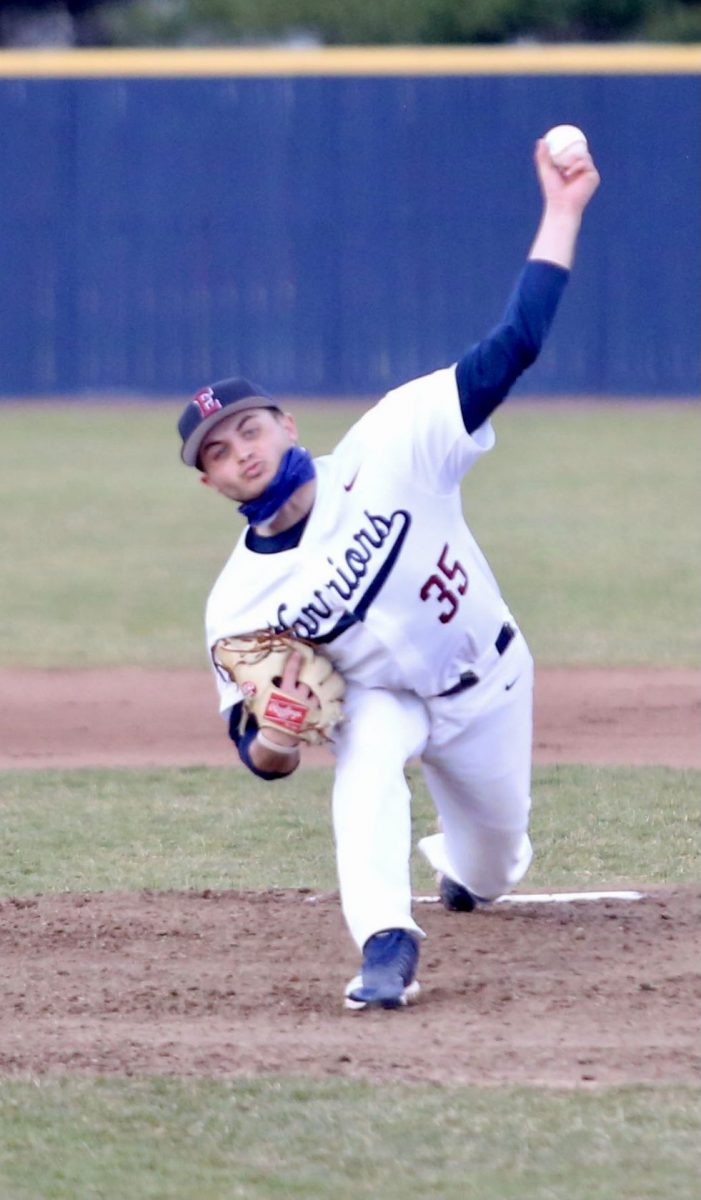 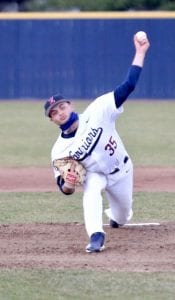 GORHAM, Maine – Junior lefty Aidan Dunn, of Westfield extended his season-opening scoreless streak to 21 1/3 innings before allowing a fourth-inning run as the No. 23-ranked Eastern Connecticut State University baseball team went on to a 7-1 non-conference victory over No. 22-ranked University of Southern Maine en route to a split of Saturday’s doubleheader at Ed Flaherty Field.
As Eastern (21-4) had done Friday in order to avoid a sweep against Southern Maine (16-8) at the Eastern Baseball Stadium, the Huskies rallied to avoid a second-game loss by scoring twice in the ninth inning to post a 4-3 victory. A hit-by-pitch, bunt single, sacrifice bunt and bases-loaded walk gave USM a literal walk-off win in the ninth inning.
In the first game, Dunn (4-0) pitched into the seventh inning for the first time this year before departing with two runners on and two out and the Warriors on the long end of a 5-1 lead. Dunn allowed four hits (three singles), fanned five and walked three. Sophomore righty Nathan Furino (East Haven) lowered his ERA to 2.25 by stopping Southern Maine on one hit the rest of the way. He fanned four without a walk and has now struck out 26 and walked only five in 16 innings. Dunn’s ERA is a staff-best 0.36.
For his efforts, Dunn received his first weekly Little East Conference honor, being named Pitcher of the Week.
Eastern scored three runs in the top of the fourth inning of the first game before USM became the first team this year to score against Dunn in the bottom of the inning on a leadoff double and a one-out single through the left side by Andrew Hillier. Dunn retired seven straight following Hillier’s run-scoring single and did not allow another hit until Tom Vesosky’s leadoff single in the seventh.
Eastern broke a scoreless tie with five runs in the middle innings of the opener on senior Drew Alexopoulos’ (Hanson, MA) two-run home run and freshman leadoff hitter Jason Claiborn’s (Prospect) single up the middle in the fourth and No. 9 hitter Noah Plantamuro’s (Bristol) two-out, two-run single that plated two unearned runs after the Huskies botched junior Matt Malcom’s (East Lyme) sacrifice bunt.
Freshman righty Nolan Lincoln (Londonderry, NH) rebounded from a rocky start in his third career start to pitch brilliantly in the first-game loss. Lincoln, who did not figure in the decision, gave up only four hits over his final six innings of work after allowing four hits and two runs in the first inning. He struck out seven and walked two in a season-high seven innings.
As it did in Saturday’s second-game win, Eastern struck in the eighth inning to overcome a two-run deficit in the second game, thanks to junior Dean Slavin’s (Tappen, NY) fourth home run of the year – a two-out, three-run shot after Claiborn opened the inning with a bunt single and senior John Mesagno (Tappan, NY) singled him to second.
On the day, Claiborn reached safely in each game with three hits and two walks, drove in two runs and scored one to extend his on-base streak to 22 and his hitting streak to 12. Mesagno also had three hits on the afternoon and Plantamuro and Alexopoulos had two hits each and drove in two runs. Alexopoulos also scored twice and Planamuro walked twice. Senior Luke Broadhurst (Stafford) – the team-leader with a .409 average — reached three times with two walks and a hit-by-pitch and scored twice. – Information from Eastern Connecticut State University was used in this report

OWLS WOMEN’S LACROSSE EARNS TITLE-GAME APPEARANCE: Westfield State women’s lacrosse will play for the Massachusetts State Collegiate Athletic Conference title for the sixth-straight season, as the Owls will travel to Framingham State for the 2021 title game on Sat., May 1, at Maple Street Field at 7 p.m.
The Owls finished tied for first in the conference’s regular season with a 3-1 record, alongside Worcester State and Framingham. Tiebreakers eliminated Worcester, and the Owls head-to-head loss to Framingham in the season-opening game proved to be the difference in determining the top seed and host site.
The Owls traveled to Framingham the last time the league had a championship game in 2019, and the underdog Owls prevailed 13-12 on that day. The cast of characters will be different this time around, as Westfield has just just five players who played in that game, and the starting lineup has turned over completely in the last 24 eventful months.
Westfield is the three-time defending conference champion, absent the 2020 season, when the NCAA suspended seasons due to the pandemic. The winner of Saturday’s title game will receive the league’s automatic bid to the NCAA Division III Tournament.
Westfield is led by senior midfielder Sam Donohoe, just two goals short of 100 for her career, and has 22 goals and five assists for the season. Sophomore attacker Cassidy Harvey is the team’s co-leader in points with 15 goals and 12 assists for 27 points.
Defensively, the Owls have been backstopped by freshman goalkeeper Kara Banagan, who has posted an 8.57 goals –against average, and has a 54.9 save percentage.
Framingham finished the year 8-1 overall. The Rams score an average of 16.3 goals per game and allow opponents 8.49 goals per outing
Westfield fell to the Rams by a 13-9 count in the season opener this year, falling behind 7-1 early in the game before battling back. Westfield was playing its first game of the season at that point after two previously-scheduled games were canceled due to covid protocols, while Framingham was playing its third game of the year. Westfield hasn’t lost since, rattling off seven straight wins from that point.
The league tournament was reduced to a single, #1 vs #2 championship game format, per the conference’s return-to-play plan.
Live video coverage of the game will be available at www.MASCAC.tv, and on the MASCAC TV app on Roku and AppleTV devices. Live stats will be available at www.WestfieldStateOwls.com. – Information from Westfield State University was used in this report