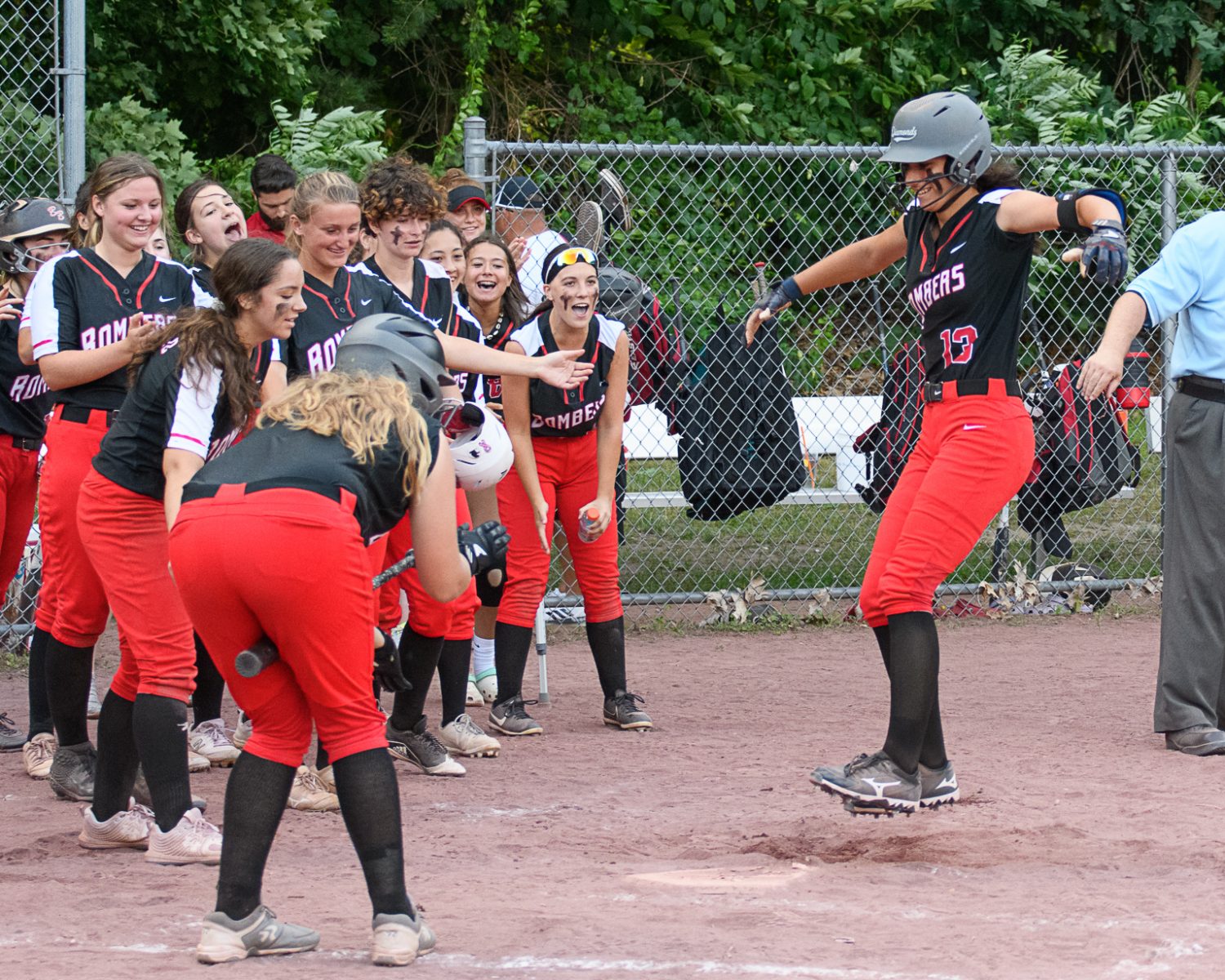 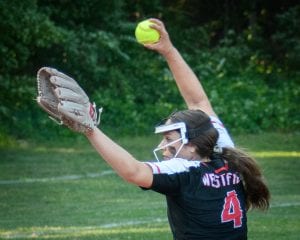 6/22
WESTFIELD – Westfield senior softball pitcher Erin Gour had a game for the ages.
Gour struck out eight batters in a two-hitter on the mound and delivered a pair of two-run home runs at the plate as No. 3 Westfield (10-3) shut out sixth-seeded Springfield Central (7-6) 12-0 in a West Division 1 softball quarterfinal Monday.
“It’s that playoff feeling,” Gour said. “Once you get in the playoffs, championships, everyone gets really excited. We’re ready.”
The offensive production came from everywhere.
Carly James put Westfield on the board in the bottom of the second inning with a RBI single. In the second inning, Kenzie Raymond hit a solo homer. A sac-fly RBI from Emma LaPoint made it 3-0 in the fourth. Gour followed with the first of her two dingers. Raymond manufactured another run, reaching after being hit by a pitch, stealing second and third bases, and scoring on a wild pitch. In the fifth, Tristan Macznik beat out a bunt, stole second base and scored on an error. Cici Toporowski walked, stole a base, and finally came around to score on a wild pitch. With one out, Gour hammered her second long ball. 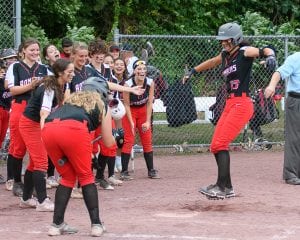 Westfield ended it in the sixth. Allie Rehor hit a one-out triple. Macznik followed with a RBI single. Marlow Murphy hit a run-scoring single to end it.
“We had a lot of people step up today,” Westfield High School softball coach Bri Pisano said. “Everybody was in sync with each other. I always tell them focus on every single pitch, every single play – – every run counts. Everybody contributed even if you’re not playing so it really comes down to all the little things.”
Westfield will look to continue its red-hot start in the semifinals.
“Any pitcher can shut out a team at any time,” Gour said, “so we just have to get in swinging, get in with good ‘D’ and keep it going, keep rolling.”

WEST DIVISION 2 SOFTBALL TOURNAMENT QUARTERFINALS
Eagles soar past Rams
No. 5 Easthampton 9, No. 4 Southwick 1
No. 4 Southwick (13-2) lost only its second game of the 2021 season, losing to fifth-seeded Easthampton (13-1) in a West Division 2 softball tournament quarterfinal.
Easthampton’s Emma Downer went 2-for-3 with a triple and two RBIs, and Anastasia Growhowski went 2-for-2 with a walk. Sarah Hough homered for Southwick.

BASEBALL
WEST DIVISION 1 BASEBALL QUARTERFINALS
Strange tosses 5-inning no hitter; Bombers roll again
No. 6 Westfield 11, No. 3 Pittsfield 0 (5 inn.)
Westfield pitcher Brian Strange had a full repertoire of pitches working – – fastball, curve ball, and slider. The end result – – a no-hitter in a mercy-shortened victory in five innings at Clapp Park in Pittsfield.
“Everything was clicking,” Strange said.
Strange struck out more than one batter an inning, finishing with 6 K’s. He also helped himself, going 2-for-4 at the plate with three runs.
Westfield’s Andrew Florek hit a solo homer in the fourth inning, walked twice, and scored three runs. Jake Jachym (run), Josh Mayo (2 RBIs), Dan Provost (walk, 2 runs, 2 RBIs), and Jimmy Cloutier (run, 2 RBIs) had two hits apiece for the Bombers (10-4). David Tirrell hit a bases-clearing double in the top of the fifth inning.
“The real ballers come out in the playoffs,” Strange said. “We’ve been working real hard at practice. …We know we have the pitching. We just have to keep the bats hot.”
Westfield High School baseball coach Mike Kennedy agreed. Said Kennedy: “For most of the season, pitching has been a strong point. If we keep our bats going, we can be a tough opponent.”

WEST DIVISION 3 BASEBALL TOURNAMENT FIRST ROUND
Labrecque, Rams silence Wahconah
No. 6 Southwick 4, No. 11 Wahconah 1
Southwick pitcher Ari Labrecque scattered five hits over six innings, allowing just one run in a opening round playoff victory. Rams’ Leighton Billing earned the save, and went 1-for-3 at the plate with a run scored.
Nate Goodwin went 2-for-3 with two RBIs for Southwick (10-5). Rams’ Jordan Drzyzga finished 1-for-3 with two RBIs.

WEST DIVISION 4 BASEBALL TOURNAMENT QUARTERFINALS
No. 11 Lenox 5, No. 3 Westfield Technical Academy 4
No. 3 Westfield Technical Academy (10-4) lost a heartbreaker at Bullens Field. The Tigers rallied twice but fell short against 11th-seeded Lenox.
Westfield Tech fell behind 2-0 but tied the game with two runs in the bottom of the third inning with a RBI triple from junior Dacota Durkee. Durkee scored when Brody Zabielski drew a throw with a run down between first and second base.
Lenox reclaimed a two-run lead with a run in each of the fourth and sixth innings.
In the bottom of the sixth, pinch hitter Jake Marcoulier led off the inning with a walk. Tim Nacewicz came in to run for Marcoulier, stole second base, and advanced to third on a wild pitch. Freshman Deven Werbiskis drove in Nacewicz with a single to left field. Josh Sturmer reached on an error and both runners moved up on the bases with a Ryan Major ground out. Zabielski then hit an infield single, scoring Werbiskis. Sturmer was caught in a rundown between third base and home plate and was called out at the plate on a controversial call. The umpires met and the call stood.
Lenox scored a run in the top of the seventh. Westfield Tech ended the game with two runners in scoring position. Tigers’ Darin Towle and Tobey Barlow also had hits in the game.
Westfield Tech pitcher Riley Sullivan scattered five hits through five innings, allowing four runs (3 earned), striking out eight.
“I’m so proud of this team and my seniors,” Westfield Tech baseball coach Bob Eak said. “They had a great season. …Our future is bright with our underclassmen stepping up well this year.”