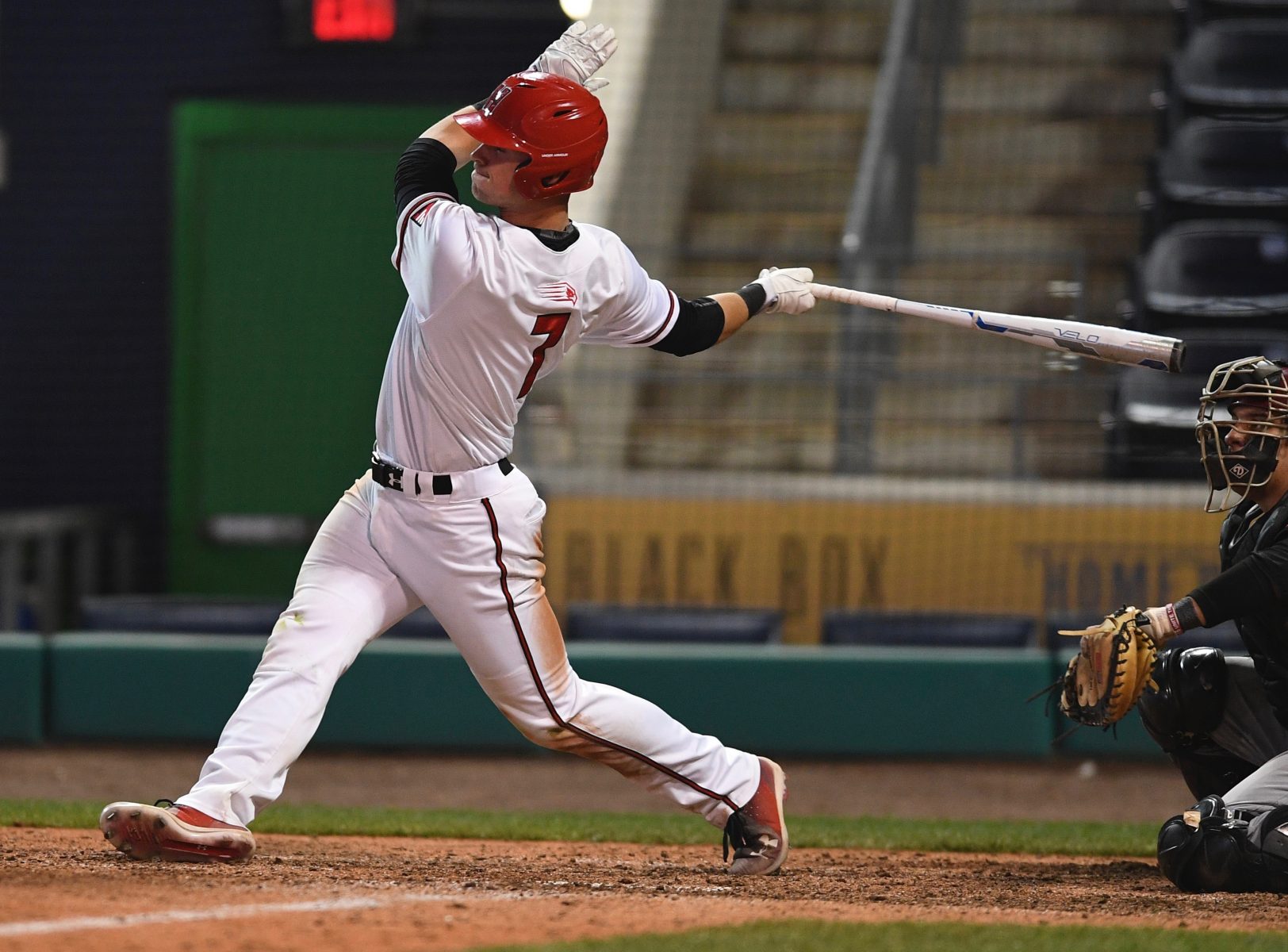 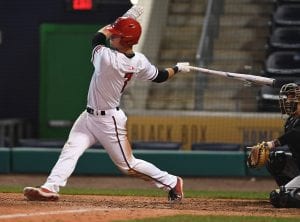 University of Hartford’s Chris Sullivan (Westfield) watches the flight of the ball. (Photo by Steve McLaughlin)

WEST HARTFORD – Westfield native and former Bomber Chris Sullivan joined two other baseball players (Ashton Bardzell, redshirt-junior Connor Lewis) in being named University of Hartford Hawks team captains for the 2019 season.
“There was strong competition for the captain spots, which is always a good thing,” said head coach Justin Blood. “Ashton, Chris and Connor have been consistent with their energy, effort and direction. I am happy for them and I know they will represent the program well.”
Sullivan, a 6-0, 2-5 pound senior, was an America East First Team All-Conference selection during his junior season after being named to the All-Rookie Team in 2016. Hitting .299 during the conference slate, he launched two home runs, four doubles and one triple to finish with the second-best slugging percentage (.455) on the team last season. 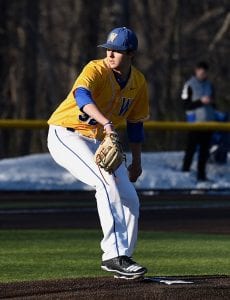 Sullivan started all 44 games in which he appeared in during his sophomore season, crushing six home runs, while playing error-free ball all year. He also made 28 starts in left field and six at third baseman his freshman year, hitting .317. His most noteworthy game came against Rhode Island early on in the 2016 season, blasting a grand slam. 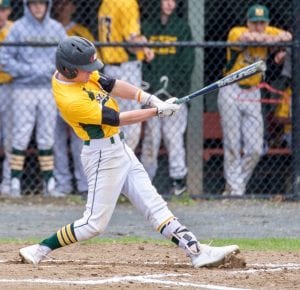 Sullivan will best be remembered by Whip City fans for his part in helping Westfield High School win a Western Massachusetts Division 1 baseball championship in 2013, as well as a Division 3 state hockey championship.
Hartford returns 29 players from the historic 2018 team, which captured the program’s first-ever America East Regular-Season Championship, Tournament Championship and NCAA Tournament appearance. The Hawks have stumbled a bit out the gate this season, going 0-9, although four of those losses were each by just one run. 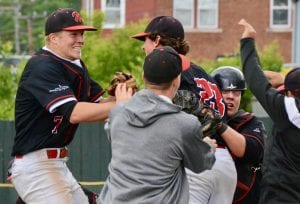 HAMEL PITCHER OF THE WEEK: Western New England senior lefthander Bob Hamel (Southwick) tossed seven strong innings in the Golden Bears’ 3-2 victory over crosstown rival Springfield last Saturday. In his longest outing of the young season, Hamel allowed no earned runs on just six hits and one walk, while he struck out six. Despite not factoring into the decision for the second straight start, Hamel lowered his ERA to 0.69 after 13 innings of work in 2019. 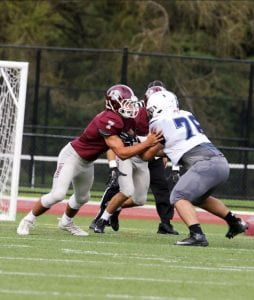 Tyler Delgado (Westfield) is seen here in action for the Loomis Chaffee football team. Delgado, who was a football, baseball, and track and field All-Star, has signed a National Letter of Intent to play football for Division 1 school Monmouth. (Staff File Photo)

MASCIADRELLI ROOKIE OF THE WEEK: Wentworth freshman second baseman Matt Masciadrelli (Westfield), a former St. Mary High School baseball star, had a batting average of .421 (8-for-19) over seven games as the Leopards closed out the Florida portion of their 2019 schedule. Masciadrelli collected multiple hits in three different contests, including a 3-for-4 performance in a 12-2 win in the nightcap of WIT’s doubleheader sweep of Penn State-Fayette. In seven games, the talented newcomer scored five runs, smacked a double, recorded two RBI, and added a stolen base.  Masciadrelli was flawless in the field, handling successfully all 25 chances that came his way, while talking part in four double plays.

MURPHY’S RALLY CRIES: Gettysburg baseball sophomore Sean Murphy (Westfield) belted a run-scoring single to help the Bullets mount a late comeback Thursday before the College of Mount Saint Vincent responded with a two-run rally in the bottom of the ninth to walk off with an 11-10 victory.
Gettysburg, which entered the game with a stellar record of 4-1, led 6-0, thanks in large part to a five-run first inning, but Mount Saint Vincent sent 10 batters to the plate in the third inning, scoring five runs.
Gettysburg was slated to play a doubleheader Friday against Norwich University. 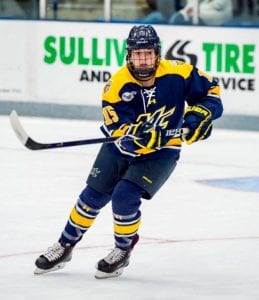 DELGADO FOOTBALL SIGNING: Loomis Chaffee’s Tyler Delgado, a 6-2, 205 pound outside linebacker/defensive end, is rising to new heights. Delgado, of Westfield recently committed to playing for Division 1 college football team, Monmouth, later this fall.
“I don’t think it’s something I’ve ever thought would happen, but it’s something I worked hard to achieve,” said Delgado, who noted that his family’s support was critical to his success.
Delgado recorded 28 total sacks in 20 career games at Loomis Chaffee, earning first team all-conference honors as a junior. He was also a second team all-conference selection during his sophomore and senior seasons.
Delgado also won the New England Preparatory School Athletic Council track and field championships for javelin, and holds the school record.

JONES LEADS MERRIMACK TO BEST FINISH: The Merrimack College women’s ice hockey team recently concluded its fourth season as a varsity program with the program’s best finish with a 16-13-7 record. A late third period goal nearly sparked a comeback for the fifth-seeded Warriors in the second game of the Hockey East quarterfinals, but Providence College held on for a 2-1 win. 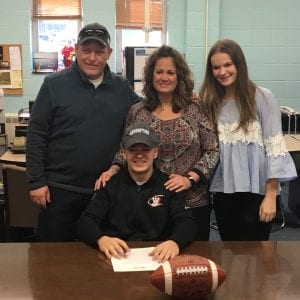 It was Merrimack’s second-ever postseason appearance.
Gabby Jones (Southwick) appeared in all 36 games for Merrimack, finishing with a team-leading shooting percentage of 19.4 percent. She had six goals and seven assists for 13 points on 31 attempts. 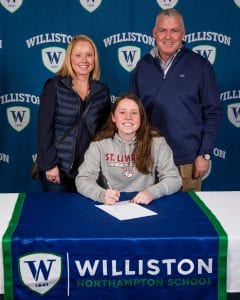 BURKE HEADED TO ST. LAWRENCE: Rachel Burke, of Westfield also announced her intentions to play for the St. Lawrence University Saints women’s lacrosse team. Broke was one of 14 Williston-Northampton student-athletes signing to play sports, who were recognized in a special ceremony last month.