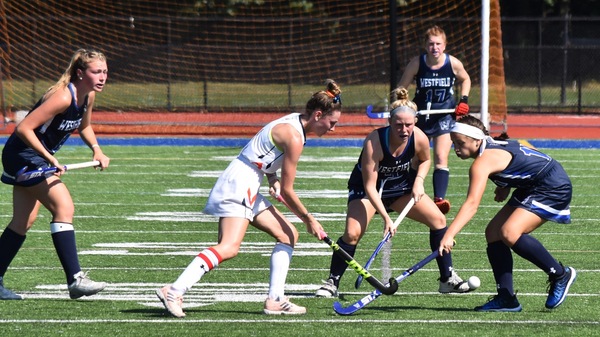 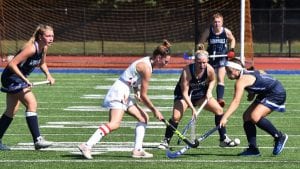 WESTFIELD – Western Connecticut State senior Carly Matasavage (Middlebury, Conn.) scored two goals to lead the Colonials over Westfield State, 4-0, in Little East Conference field hockey action at Alumni Field on Saturday afternoon.
The Colonials controlled a very one-sided game, outshooting the Owls 14-2 and holding a 9-1 edge in penalty corners as well. With the win, Western Connecticut improves to 6-1 on the season and 2-0 in the Little East Conference.
Western Connecticut got the scoring started only 57 seconds into the game when Carly Matasavage knocked home a rebound shot from Morgan Matthews (Bethel, Conn.) to give the Colonials an early 1-0 advantage. Nearly five minutes later, Western Connecticut would make it 2-0 after Nora Swift (Brookfield, Conn.) sent a one-time pass to Matasavage who put it into an empty net for her second tally of the game.
Junior Katie Vamosi (Easton, Mass.) replaced Westfield State starting goalkeeper Riley Goulet (Marion, Mass.) at the start of the second quarter, and went on to record 4 saves on 6 shots for the remainder of the game.
The Colonials kept the attack going after halftime, when freshman Sophie Leeds (Trumbull, Conn.) would deflect a rocket of a shot from Lili Dickey (Westbrook, Conn.) past Vamosi and into the back of the net for a 3-0 lead.
Junior Amanda Spano (Mahopac, N.Y.) would tack on her fourth goal of the season with just under two minutes remaining to seal the deal for Western Connecticut.
Colonial goalkeeper Neve Manion (Newington, Conn.) recorded her second-straight shutout on the young season, and has only allowed 5 goals in 7 games.
With the loss, Westfield State drops to 3-5 on the season and 0-2 in the Little East Conference.
The Owls hope to get back on track against Salem State, as they take on the Vikings on the road on Wednesday in a 4:00 p.m. start.
Western Connecticut hosts Fitchburg State in another LEC matchup on Wednesday night at 7 p.m. – Courtesy of Westfield State University Sports