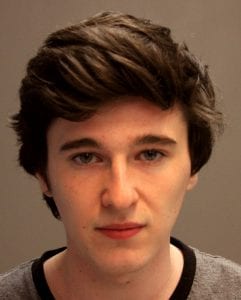 WESTFIELD – A troubled young city man will serve eight nine-month jail terms — all at once – after pleading guilty to offenses ranging from breaking and entering to disrupting court proceeding.
The changes stem from three apparently senseless incidents in February and May of 2020 which landed Vladislav Khomichuk, 21, of 31 Western Circle, Westfield, in Westfield District Court.
The first of the incidents was on Feb, 20, 2020, when Westfield Police Officer Zachary Coderre responded to a burglar alarm at Toomey Associates on Russell Road.
Coderre reports he arrived to find the back door of the business had been forced open and Khomichuk was inside the business. When asked what he was doing there, Coderre reports, Khomichuk said “I was looking for cigarettes” but the business is not a retail establishment and has no inventory of cigarettes or anything else likely to tempt thieves.
The next day, while Khomichuk was in a holding cell at Westfield District court awaiting arraignment on charges of breaking and entering and malicious destruction of property (the business’s alarm panel had been torn from the wall), he dug himself into a deeper hole by flooding his cell and other areas of the court house.
Court Officer Felix Otero reports that Khomichuk and been compliant but a short time after he left him in cell #6, “I observed on camera that the sprinkler system and alarm had been activated in lockup cell #6. Mr. Khomichuk had broken the sprinkler head off, triggering the alarm and sprinkler system, flooding his cell and the lockup area.” The water, contaminated with oil from the system, leaked through the walls into the front lobby, Courtroom One and a hallway.
The courthouse was closed and charges of malicious destruction of property valued more than $1,200 and disrupting court proceedings were added to Khomichuk’s list of offenses.
He was arraigned the next Monday and, although technically released on his personal recognizance, ordered to a Worcester hospital to be examined for his competency to stand trial and to be criminally responsible.
Khomichuk was then scheduled for a pre-trial hearing on March 13, after his release from hospital, but that hearing was postponed due to the COVID-19 pandemic until April 10 and then again until July 24.
However, before he was scheduled to return to court he again came to the attention of city police.
Over several days in early May, police received reports of fires having been set in Stanley Park as well as incidents of vandalism in the park and at the nearby United Church of Christ, Second Congregational.
Det. Brian Freeman investigated the incidents and reports a witness came forward who said that while walking in the park she had encountered a man named Vlad starting a fire. She told Freeman that she spoke with the man who told her “he wanted to burn the whole forest down.”
The witness’s information led Freeman to 31 Western Circle, the home of Vladislav Khomichuk, then 20, a young man Freeman had encountered in another investigation. There, he found the man was wearing the clothing the witness had described.
Khomichuk was arrested and Freeman reports that, after he read Khomichuk his Miranda rights at the station, “he admitted to me that he had destroyed the gazebo (at Stanley Park) by kicking the railings, he admitted starting three fires in the park and admitted to breaking the bench at the church.” 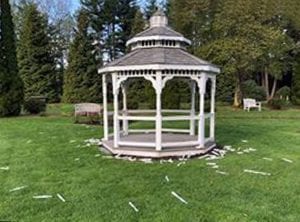 A suspected vandal who admitted to damaging a gazebo in Stanley Park  has been sentenced to a nine-month term in the house of correction.(STANLEY PARK PHOTO)