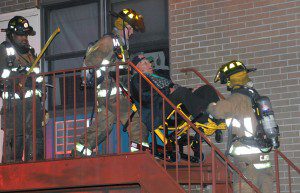 Westfield firefighters use a fire escape to evacuate residents of The Washington House at 16 Washington Street. (File photo by chief photographer Frederick Gore)

WESTFIELD – City emergency responders have been working together and have been involved in training that develops communication, as well as the exchange of trust and knowledge, so the disparate agencies act as a cohesive team in real emergencies.
Michael Suckau, Health Director, reported that the Oct. 2, 2012 fire at the Washington House Apartments required extensive coordination, as police and firefighters evacuated residents from the building and battled the 9:43 p.m. blaze in the four-story structure. Initially all residents were evacuated while the fire was extinguished and the building ventilated to expel toxic gases produced in the conflagration.
“The original number of people displaced was between 50 and 100,” Suckau said.
Nearly 100 seniors were affected by the fire but many were allowed back into their apartments or found shelter with friends and relatives. The Red Cross set up a shelter at the Central Baptist Church at 115 Elm St. in Westfield for those displaced.
A team composed of Emergency Management Director Jim Wiggs, Council on Aging Executive Director Tina Gorman, Edward Mello Jr., of the Greater Westfield and Western Hampden Medical Reserve Corps, Health Inspector Joe Rouse and Richard Rubin, executive director of the Greater Westfield Chapter of the American Red Cross, immediately began to address the needs of residents forced out of their homes.
“Rich Rubin was able to execute a memorandum of understanding (MOU, the formal document needed to access the assets of different agencies), with the church that night, so we were able to put up residents there. Jim (Wiggs) secured transportation with Lecrenski Brother Transportation.”
“And Tina Gorman is a familiar face for a lot of those residents, even the ones who speak little English, somebody they know and trust,” Suckau said.
“It really was a great collaboration,” Suckau said. “A lot of cities don’t have those inter-agency relationships. It’s always great to see city agencies and other parties working together.”
“The whole point of having training exercises is so you don’t walk into an emergency scene and say ‘who is that’,” Suckau said. “You have to know the function of each player, what resources they bring to the table and what are their responsibilities.”
“We have a lot of exposure working with each other, have very comfortable relationships,” he said.
The investigation into the Westfield fire at 16 Washington Street was conducted by the Westfield Fire and Police Departments, Westfield Housing Authority, insurance company investigators, electrical experts and State Police assigned to the Office of the State Fire Marshal.
State Fire Marshal Stephen D. Coan and Westfield Fire Chief Mary Reagan determined that the fire was started when a burner on the electric stove was unintentionally left on and nearby materials ignited.
The fire caused an estimated $750,000 in damages and initially displaced 134 people from the 4-story building temporarily and 25 residents of the third floor where the fire originated will be displaced longer-term while the damage is repaired. That damage estimate may rise as the building’s steel structure is further examined.
Three residents and a police officer were treated at Noble Hospital for smoke inhalation and fire-related injuries.
Cooking is the leading cause of fires in Massachusetts, the leading cause of fire injuries and the leading cause of fire injuries to people over 65. In 2010, there were 9,806 residential fires in Massachusetts involving cooking. These incidents resulted in one civilian death, 95 civilian injuries, 32 firefighter injuries and an estimated $6.9 million in property damage, according to the Massachusetts Fire Incident Reporting System.
“We have a statewide cooking fire safety campaign with two important messages,” Fire Marshal Coan said in a prepared text. “Stand by Your Pan to prevent unattended cooking fires and Put a Lid On It to put out a stovetop fire by smothering the flames.”
Check the Department of Fire Services website  at www.mass.gov/dfs for more information on the Cooking Fire Safety Campaign.