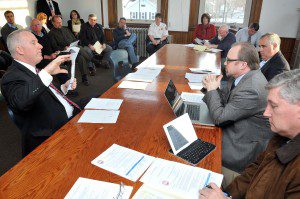 Westfield Mayor Daniel Knapik, left, reads a financial (draft) document pertaining to the city’s challenge to the Other Post-Employment Benefits (OPEB) liability during a meeting with members of the Finance Committee last night. (Photo by chief photographer Frederick Gore)

WESTFIELD – The City Council tabled action on the $10 million bond requested by Mayor Daniel M. Knapik for energy efficiency and facility improvements and requested that the administration’s financial team rework the numbers for revenue growth over the next five fiscal years.
Knapik is seeking council approval of the $10 million bond for Phase 1-B of the EMS program that includes work at City Hall, Westfield High School and Westfield Vocational Technical High School that was not included, or not eligible, for the Massachusetts School Building Authority (MSBA) Green Energy program or the Energy Management System (EMS) Phase 1-A.
Energy improvements were made at the two school buildings, resulting in substantial reductions in energy consumption, but further controls, sensors and ventilation systems need to be installed to maximize the benefits of the new hot-water heating that replaced the boilers originally installed in those buildings 40 years ago.
The City Hall work will encompass installation of a hot-water heating system, new lights, revamping the electrical system, air conditioning, American With Disabilities (ADA) compliance, parking lot expansion and repaving and environmental remediation for asbestos.
Knapik discussed the city’s ability to finance the $10 million bond last night for an hour prior to the regular City Council meeting.
Members of the Finance Committee had requested a detailed report, with projections of new revenue and projected debt. The city plans to bond a number of other projects including about $13 million for the new elementary school, $7 million for construction of a new senior center, as well as funding needed for the Gaslight District and Old Town infrastructure improvements and extension of the Columbia Greenway into the downtown area.
Last  night the finance members objected to the new revenue projections, but accepted the city’s debt estimates.
Finance Chairman Richard E. Onofrey Jr., and member David A. Flaherty both rejected the projected revenue that will be generated as tax-incentive financing (TIFs) expire. Treasurer Megan Miller, who was out of town yesterday, presented cumulative numbers. New revenue is typically reported on an annual schedule and added to the tax base numbers the following year.
TIFs are financial incentive agreements between companies, building new facilities or expanding existing facilities, and the city, that reduce property and personal taxes. Typically those agreements are structured with an escalating payment schedule so that the city receives increasing tax payments each year of the agreement until the TIF expires.
“We can’t use cumulative numbers because in the second year it is no longer new revenue,” Onofrey said.
Knapik agreed to have the revenue projections reworked to reflect the concerns voiced by the Finance Committee members.
Onofrey, during the full City Council session, said that he is also concerned that the city’s debt payment is dropping below the level established by former Councilor and Finance Chairman John Liptak. The council adopted a policy of maintaining an annual debt payment of between $6 and $7 million to preserve future bonding capacity.
“Currently the debt burden is $5.2 million, while historically it has always been between $6 and $7 million,” Onofrey, who was Finance Committee member when Liptak proposed that debt policy, said. “If we drop below that debt level we risk having that (bonding capacity) taken for the operational budget funding, to pay salaries, and we’ll never get that capacity back. This $10 million bond will push that (annual debt payment) number back up between $6 and $7 million.”
“I’m very comfortable with moving this bond forward,” Onofrey said.
Flaherty, who made the motion to table the second reading and final passage of the bond, said that he agreed with Onofrey “that we don’t have accurate numbers.”
“We did get several rosy guesses on income and rosy guesses on the expense side,” Flaherty said in his motion to table to the next meeting “subject to having these numbers updated.”
Council President Brian Sullivan requested Flaherty to amend his motion to table the votes to either the next regular meeting, slated for April 4, or to the next special meeting, which Sullivan could call because of the time schedule for the City Hall repairs. The staff will be moved to the upper Westfield Vocational Technical High School campus (the former Westfield High School building) in June while the City Hall interior is renovated.
That work, which includes asbestos removal, has to be completed before the start of the 2013-2014 school year.
The council approved the first reading of the bond order at a special February 25 session, but could not vote at the March 7 meeting for the second reading and final passage because state law requires a 10-day period during which the bond order is published in local media. The action tabling the order last night further delayed the start of the work.